COMMODITIES â€“ ON THE MOVE

Gold is now safely above the $1,000 mark, and there are two aspects to this, one good, one bad. The good aspect is that $1,000 is now a floor (whereas from March 2008 to Sept. 2009 it acted as a ceiling). The bad aspect is that we are now vulnerable t to a pull back to $1,000., and we need to be on guard for this possibility. Pull backs to support are tricky and come when least expected. The decline in gold to $680 just a year ago was a decline to the support defined by the giant symmetrical triangle of 2006-07. The support was at the apex of the triangle, which was precisely $680 (on the semi-log chart).

But there is a new aspect to the markets which has appeared very recently, which is contradictory to almost everything you read and hear and which is vitally important for the understanding of todayâ€™s markets. This is best illustrated by what has happened to sugar since the lows of last December. 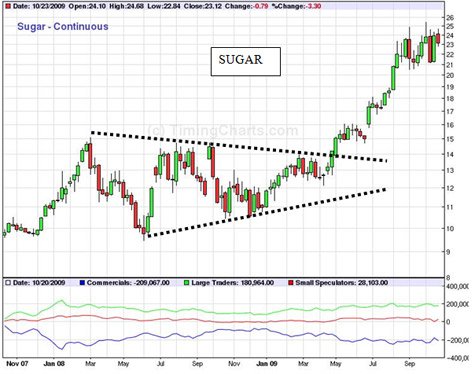 Sugar has some affectionate memories for technicians. Back in the first upswing of the commodity pendulum, in the 1970s, it rose in price from 2Â¢/lb to 66Â¢/lb. That was one sweet move. So when we see sugar on the move here in 2009, we cannot help but think of those days.

And then once you have purchased your sugar, you might put some of it in your cocoa to

make one tasty drink (only available, however, to believers in the commodity pendulum). Cocoa has just recently moved into new high ground. 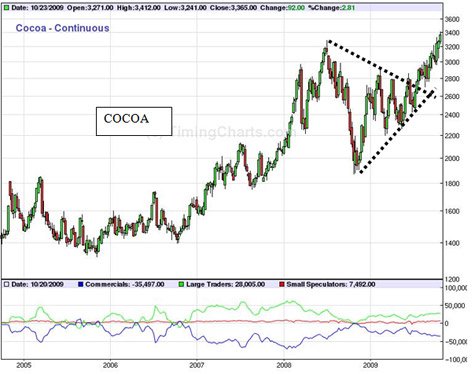 These two commodities give us an important clue to the markets, something that according to establishment thinking is not supposed to be happening. And to comprehend this we must return to the dark days of autumn 2008. At that time, you undoubtedly remember, commodities were being thrown out the window.

To remind you of what I said at that time, commodities (and stocks) were not declining because of fundamental selling. The fundamentals remained bullish. The selling came from speculators who wrongly anticipated lower fundamentals. Now these speculators are starting to get their come-uppance.

This is the most important fact you need to understand to be able to predict todayâ€™s markets. Commodities are in a giant upswing which started with a double bottom in 1999-2001. And yet, what have you been reading and hearing for the past year? You have been hearing that all prices are going down. This view is everywhere. It is on the TV news. It is in your local newspaper. It is voiced by your friends at a recent social gathering. Everybody says it. They say it in different ways: Some people (more radical) predict â€œ Americaâ€™s Second Great Depression.â€ Others (more moderate) call it â€œThe Great Recession.â€ Any way you cut it what all these people mean is what they call deflation â€“ a serious decline in average prices over a significant period of time. And the only voices raised against this are a few gold bugs (and not even all of these).

Well, that is OK with me. I have stood (virtually) alone many times in my economic career. I did so in 1970 when I was one of the few gold bugs with the price of the metal at $35/oz.. I did so again in 1982 when I had turned into a raging stock bull with the DJI at 780. And I did so in early 2007 when I called an end to the 25 year bull market in stocks. So on this issue, I put to you the question, are commodities going up or down? 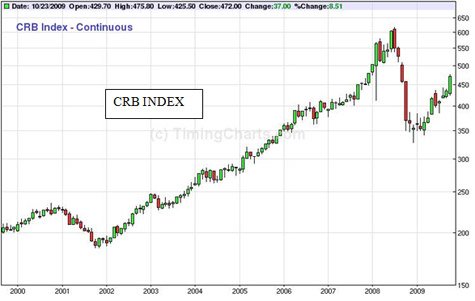 In 2001, the Commodity Research Bureau index hit a low of 184. On Friday, it closed at 469. And that looks like up to me. That is, commodities have been going up for 8 years, and most of the people in the world donâ€™t even know it.

The reason for this is that most people are too lazy to think for themselves. They say, â€œI will take the opinions of the others around me.â€ Knowing this a few power hungry types have worked their way into positions where they can influence the majority. Then everyone follows everyone else, and everyone winds up thinking the same (wrong) thing. Central to this lemming-type behavior is the New York Times. Newspapers across the world imitate the Times. The network news shows imitate the Times. When your friend-at-the-social-gathering tells you that the world is in a Great Recession, he got it from his local paper which got it from the Times.

When I say that the decline of last autumn was speculative and not based on fundamentals, the Times is a good illustration. In May 2008, they predicted that crude oil (then $125/bbl) would rise to $200. This got speculators in crude very bullish, and these people put the price up to $147. Then, however, it turned and plunged to $34/bbl. This was partly because the Times itself had turned bearish and was shouting that we were in a financial crisis. That is, people read the Times. They donâ€™t read it directly. They donâ€™t know they are reading it. They read a secondary or tertiary source. They may indeed read/hear several sources and consider themselves well informed. But all their sources come from the New York Times.

Now this would not be bad if the Times were the great paper created by Adolph Ochs when he purchased it in 1896. In 1896, the U.S. was in a great debate over the gold standard. William McKinley was the gold bug. (The phrase â€œgold bug,â€ as well as the Wizard of OZ, date from that year, OZ referring to the gold ounce.) William Jennings Bryan gave a famous â€œcross-of-goldâ€ speech condemning the gold standard. Ochs supported McKinley and the gold standard, and Bryan went down to flaming defeat.

The descendants of Adolph Ochs, however, are not worthy to walk in his shoes. They have delivered their paper into the hands of crackpots (socialists and Keynesians). This article is too short to analyze the errors in their political views, but a look at their actions with their own paper is very interesting. At the beginning of the century the Times got very excited over a bullish view of the stock market. They published â€œDow 36,000 by Glassman and Hassett. They were so bullish that they spent a large amount of money buying their own stock circa $40 per share. It is now down to $11 and got as low as $4 this past March. They had to mortgage their new headquarters and take a loan from Mexican billionaire, Carlos Slim. They had to break the union at the Boston Globe, which of course conflicts with their own socialist convictions. These are the people who are telling your neighbors what to think. And all of your neighbors are saying, â€œEVERYBODY KNOWS THAT PRICES ARE GOING DOWN.â€

Not all commodities are moving.. The grains, for example, are still on the canvas. That, however, shows us that the revival in commodities is still young. There is plenty of time.

So the future will be as follows. The sheep will be wrong. Commodities will continue the bull move which began in 1999-2001. Stocks are to the upside for the moment, but once the Fed tightens, they will be vulnerable to a nasty decline. People today have the concept that they can retire from the stock market. A few hot shots might be able to retire on their stock winnings. But stocks are capital goods. Consumer goods are goods that people use. Capital goods help us make consumer goods. They cannot be consumed themselves.

PEOPLE WHO RETIRE NEED CONSUMER GOODS, a place to live, food, clothing, amenities. Once a few people cash in their stock winnings to get these good things, stocks go down, and the winnings disappear for the vast majority. The concept of a whole nation retiring by speculating against each other and everybody winning is insane. It is like a neighborhood poker game where every player begins the evening expecting to win. By the end of the night, reality will have intruded. The force that kept stocks going up for 25 years was the long decline in interest rates. That decline has gone as far as it can. Many people (including Fed governors) are calling for higher rates. We are now at the beginning of a long period of higher interest rates, much as occurred in the 1970s.

At the One-handed Economist, I forecast the financial markets with special attention to gold and other commodities. You can subscribe via my website, www.thegoldspeculator.com ($300/year). You may be interested in my blog, www.thegoldspeculator.blogspot.com. Or you can send $300 to OHE, 614 Nashua St. #122, Milford, N.H. 03055. This weekâ€™s blog is on depression (the psychological not the economic kind). Also included is an open letter to my congressman urging him to vote against the current Democratic health care legislation.