There has been a sense in the gold market through the month of February that gold is going down, a sense of negativity and discouragement. Gold bugs are giving up and pulling out. The U.S. dollar index hit 81 on Friday. The Fed is tightening. â€œWhat more,â€ say the bears, â€œis there to say?â€

Is this true? Is gold going down? Let us look at the chart. 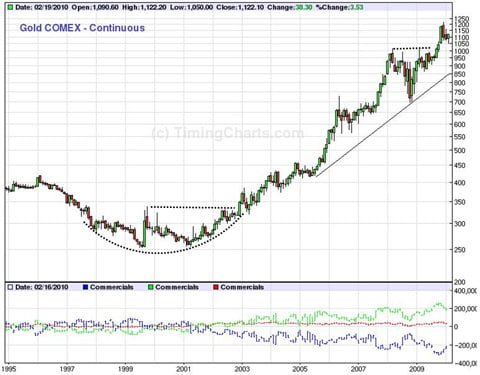 I was not unaware of this decline. Indeed, on Dec. 2, 2009 I sent out a special bulletin in which I wrote, â€œI am giving a sell signal for all three of our gold stocksâ€¦.Sell all shares and stand aside from the precious metals for a while.â€

That while is now over, and my point is that the vast majority of speculators, in gold or any other good, are much too close to the market. They follow news items day-to-day. They get excited by little up and down moves. They rarely look at a long term chart.

Indeed, I challenge you. Go through the commodity web sites and try to find a chart of gold which goes back to the 1970s. Here we are in the second upswing of the commodity pendulum. Doesnâ€™t it make sense to go back and look at what happened during the first upswing of the commodity pendulum? Wouldnâ€™t it be likely that there would be parallels? Being an old timer I saved my charts from that period, but I feel bad for younger students who are brought up in a society which pressures them to only pay attention to the short term.

What did the chartists of the early 20 th century, the ones who were my teachers, say about this issue? Very simply, they said:

These chartists knew that the vast majority of traders are caught up in the present. They lose sight of the big picture, and their behavior becomes so irrational that it can hardly be believed. For example, take the events of August 15, 1971. Richard Nixon abolished the last link that the U.S. had to the gold standard. He also imposed price and wage controls. This paved the way for the Fed of the day to go wild printing money, and they continue to go wild today.

What was the long term reaction to this event? We know that over the decade the price of gold, then only a small amount above its $35/oz. low, rose to $875. What was the short term reaction? Gold sold off. After all, hadnâ€™t the President said that he was going to take action against â€œinflationâ€ by forbidding prices from rising? Since â€œinflationâ€ was now as good as defeated, what need for gold? Such was the short term reasoning of the day. (Actually, the price controls of 1971 were such a blatant failure that they have discredited such a policy to the present day.)

But actually, it was precisely the fact that people thought that â€œinflationâ€ had been defeated which led them to support the Government and the administration in power and which allowed the Fed to ease in 1971-72. This printing of money led to an 8.7% increase in prices in 1973 and a 12.3% increase in prices in 1974. This increase in prices was not totally caused by the money printed in 1971-72. Part of it was due to the rise in commodity prices, which was the result of the money printed during the 1960s. That is the tricky part of the commodity pendulum. It occurs over such a long period of time that the vast majority of the people cannot connect cause and effect. And, of course, we face the exact same situation today. There was massive printing of money over the â€˜80s and â€˜90s (16.9% in 1986, 14.3% in 1992). It did not have its price rising effect at the time. Essentially the losses (which corresponded to the gains of the paper aristocracy) were taken by commodity producers, and many of them had gone under by the late 1990s. (Real commodity prices fell by 2/3 from 1980 to 1999.). Now those commodity producers are no longer around. In this sense, there is a fundamental shortage of commodities. Thus commodity prices go up at the drop of a hat. This passes through into producer prices and then into consumer prices. For this reason, I was alarmed by the 1.4% increase in producer prices for January 2010. Over the past 6 months, the Producer Price Index has expanded at an annual rate of 9.8%. The establishment was too dumb to become alarmed. But a serious increase in consumer prices is around the next corner.

On top of the increase in consumer prices caused by the money created by Volcker and Greenspan in the 1980s and â€˜90s, there is a massive increase in money due to Bernanke. The Fed started to lie about the nationâ€™s money supply in 2008, reclassifying certain demand deposits as time deposits. That is, the owners of these deposits are being told that they have demand deposits (which can be withdrawn at any time and are counted in the money supply), and the Fed is telling the public that these are time deposits (which have limits on their withdrawal and are not counted in the money supply). It was my estimate that the money supply for 2008 rose by 70%.

This new money was created by the Fed mostly in the autumn of â€™08. At that time, the â€œdeflationistâ€ school argued that this was being offset by a contraction in the portion of the money supply issued by the private banks. There was a partial truth here. Such contractions in the private bank portion of the money supply are common and occur in the latter part of each â€œrecession.â€ However, the expansion by the Fed always overwhelms this small contraction, and we can have little doubt that it will do the same on this occasion.

As these two forces hit our economy, prices are going to skyrocket, and the â€œdeflationâ€ thesis will be decisively refuted (much as the price control thesis of 1971 was refuted in 1973-74).

At the same time that these fundamental forces are unfolding, we have one technical principle after another calling for a massive rise in gold. As I noted back in October, 2009, the $1,000 level, which resisted any price increases for a year-and-a-half, has now turned into a support level. Furthermore, it looks very much as though the pull back which started Dec. 3 did not make it all the way back to $1,000 but ended Feb. 5 at the $1,050 area. This leaves a gap of approximately $50 between the expected pull back and the actual point.

Such gaps are unusual. Most pull backs go right to their expected level. To create such a gap, the long term bullish force must be very powerful. It means that the bulls do not need any help from the support at $1,000. Such technical patterns are rare and are a chartistâ€™s dream. (The fact that gold fought off two back to back bearish news items on Thursday and Friday, closing unchanged, shows the same kind of power.)

In short, the markets take a long time to discount important, grand cycle events. The trillion dollar deficits and massive increase in the money supply are coming on top of the phenomenon of the commodity pendulum. Everything is coming together.

At the same time, the media have turned most of the people in the country into a bearish mood. They have been brainwashed to think that everything is going down. This means that the very bullish situation in gold is not recognized and has not been discounted in advance. It is a rare opportunity and corresponds to the stock market in 1983. (People were still bearish because of the propaganda of 1982, but in reality the stock market was higher and in fact had turned up into the great grand cycle bull market of 1982-2007.)

There is one quality which marks a gold bug. All of the people with fancy titles are against him. So it was in the 1970s. All of the respected newspapers and magazines, all of the professors of economics, all of the high muck-a-mucks, laughed at the idea that gold could go up. All of these people were wrong.

We find this in many areas of society. The people who can do, who get it right, have no titles. The Wright Brothers, for example, never graduated high school. But they invented the airplane. The reason for this is that everyone who pursues knowledge comes to a point where he has to make a decision. Should he get knowledge, or should he get an impressive title which convinces people that he has knowledge. That used to be widely understood in our society.

Today, sad to say, the majority of the people are impressed with titles. They are the worldâ€™s losers. After all, by 1979 it was clear that the gold bugs had been right. What can be said about the younger economists of today, the ones who got their education after 1979? We know what these people did. They chose to study under the idiots in the establishment, the people who predicted, back circa 1970, that gold would go down to $6 or $8 per ounce. They valued the impressive title more than the truth. And so, now they have very impressive titles but no truth.

To help you make the right choice, I publish a fortnightly economic letter called the One-handed Economist ($300/year). It features my theory of the commodity pendulum, Austrian theory economics and technical analysis. In 2002, I turned bullish on gold and gold stocks for the grand cycle, and I am in them for the big move.

To subscribe to the One-handed Economist, you may send $295 ($5 cash discount for using regular mail) to: The One-handed Economist, 614 Nashua St. #122, Milford, N.H. 03055. Or you may visit my web site, www.thegoldspeculator.com and send $300 via Paypal. Right now I am convinced that gold is ready for a big move, and I invite you to ride this move with me. Thank you for your interest.