In The Inflation-Deflation Debate Heats Up, publisher and editor of the Gloom Boom & Doom report, Marc Faber, argues that deflation is a possibility in the near-term, but long term inflation is what we should expect as the end game for the economic crisis in the USA.Â Essentially,Â the entire argument is based on whether or not the monetary and fiscal policies of the United States of America will counteract the credit deleveragingÂ that is occuring. SHTFPlan users have pointed out some key ideas that need to be considered when discussing inflation and deflation.

AS, a contributor to the discussion said:

Since Nixon took us off the gold standard, it is futile to try andÂ measure your wealth in terms of dollars. STUFF is wealth. I havenâ€™t just been buying gold and silver, I buy non-perishable food as well. That is true wealth. Go back to the medieval times – their wealth was measured in how many cows, acres of land, gold piecesÂ they had, etc. If the dollar crashes and you are holding stuffÂ youâ€™re not really going to care.

AS, is right on with the idea that STUFF in today’s society is considered wealth. Martin Armstrong, in The New Practical Laws of Economics (Page 6; this is a two part document, and the Practical Laws document is located about halfway in), argues that money should not be definedÂ as just the amount of money held in bank accounts, but should include everything that may be considered wealth such as stocks, bonds and real estate. Ask anyone on the street about their home, and 99% of people will consider it a part of their assets, and as such, their wealth. Therefore, we need to consider everything — money markets derivatives, etc. — as wealth.

Rick, another contributor identified another key component of the deleveraging/money supply debate:

You can print all the money you wantâ€¦whichÂ (I think) technically causes â€œclassicalâ€ inflation (more paper money = eachÂ dollar SHOULD be worth less)â€¦BUT if everyone getting that money stuffs it in there mattresses, andÂ doesnâ€™t spend it, prices may not go up at all (at least for a whileâ€¦).

If fact,Â prices could keepÂ falling simply because of supply/demand.

Rick is talking about the velocity of money. If the government gives us temporary tax cuts, or a one-time check in the mail for $1000, then chances are, most people will stuff that under their mattress or use it to pay of existing debt. The money will not make it into the economy as the government hopes it will. One-time and one-off tax rebates or stimulus packages will not provide the confidence needed for consumers to begin spending for the future. Additionally, the bailouts and stimulus packages that were supposed to boost the velocity of money through a ‘restarting’ of lending has done nothing of the sort, as credit lending has dropped significantly. If anything, most of the money used to bailout failing institutions has probably made its way into global equities and commodities markets, adding no value to sustained production domestically – the money simply did not hit main street like it was supposed to. You probably don’t need a chart to confirm that the velocity of money has collapsed, but if you do, click here.

Martin Armstrong has an interesting take on money velocity, and how we shouldn’t just be worried about whether or not Rick puts his money under a mattress, but we also need to consider foreign holders of debt and how they may impact our economy in the floating exchange system:

The monetarists assumed that velocity was stable and thus an increase in money supply would result in greater spending of the extra cash on goods and services causing GDP to rise. The Fed could slow the growth rate by selling bonds taking cash out of the system. But these assumptions are not real, for the velocity can and will change depending upon “confidence” and in a Floating Exchange Rate System the Fed cannot directly be sure it is putting money into or taking out of the system when there are foreign holders of debt. The model begins to decompose under our new dynamic global economic system.

Now that we have a basic idea of how to define wealth by today’s standardsÂ and the importance of money velocity, we can begin to look at the deflation and inflation debate with a little more understanding. In his August 2009 Economic Forecast, Harry S. Dent Jr., of HS Dent Investments, provides an interesting chart from Steve Keen’s Debtwatch: 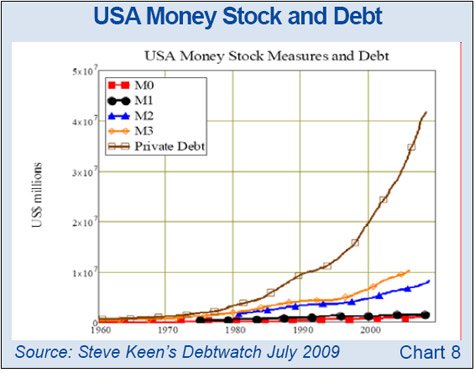 Chart 8 from Steve Keen in Australia, shows how private debt in the U.S. has grown exponentially vs. every measure of money supply, even the broadest M-3. In fact, Keenâ€™s primary argument against neoconservative economists like Bernanke is that they do not take into account the massive role of private credit, especially in bubbles like the extreme one that has developed here. The Weekly Leading Index does not measure private debt acceleration and deceleration, but instead measures money supply plus stock-and-bond mutual funds. Private debt deleveraging is at the heart of this unique downturn. It is decelerating faster than money supply and is more than offsetting the dramatic rise in government debt/stimulus.

Our next chart, also from Steven Keen, looks at Private Deleveraging and Unemployment:Â 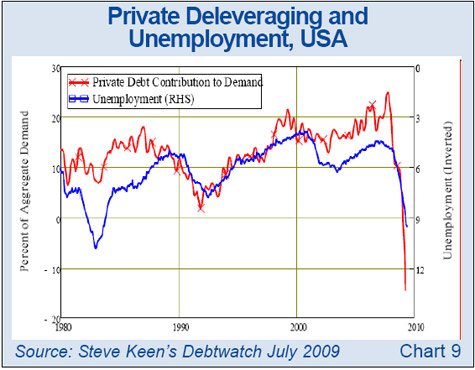 No economist thinks that debt and bank lending are going to return to anywhere near the levels of the bubble boom in this recovery. So how do you replace up to 25% of demand, or nearly 20% of GDP? You canâ€™t even come close with a normal recovery! That is precisely why you get a protracted downturn and period of deflation after a major bubble boom peaksâ€”as occurred in 1930-1933 in the U.S. and from 1990 forward in Japan. Chart 9 also suggests that in the coming months, unemployment is likely to continue rise to 11% to 12%. If so, unemployment could be the most important trigger for rising loan defaults in many sectors and could cause the next banking crisis and downturn.

Despite the strong rise in leading indicators, history tells us clearly that once a massive deleveraging process starts, it continues and is impossible to stopâ€”although it can be stalled, as has occurred here. Unemployment is a lagging indicator and is expected to continue rising in the early stages of the recovery. Thus, unemployment is the biggest threat to the developing recovery given the unique fragility of the banking system.

Mr. Dent lays out a strong argument for deflation in the near-term. Marc Faber also agrees onÂ the possibility of aÂ near-term deflationary impact as a result of the bursting of the recent bubble. Where they differ, it seems, is that Harry Dent believes there will be a protracted period of deflation, while Dr. Faber suggests that any deflation, if it were to occur, would be about a year or less. Dr. Faber believes that any such deflation will lead to massive spending via stimulus and bailouts, which would quickly turn any deflationary cycle back into inflation.

So, there you have it. Deflation it is (at least temporarily).

Comments, as always, are welcomed.

Also worth reading: Comments for Marc Faber: The Inflation-Deflation Debate Heats Up