The Trend is Your Friend

Playing the markets is not an easy occupation. One normally thinks that it involves buying at the bottom and selling at the top. But in fact, one must make a new decision every trading day. We had a good illustration of this on Friday, June 4 when gold plunged sharply in the morning, and at the same time the dollar broke out of a small triangle to the upside. Since the dollar often moves opposite to gold, this was a bearish signal for gold. A yearâ€™s trading, then requires 250 decisions. A decadeâ€™s trading requires 2,500 decisions. Fortunately, to make money we do not need to get all of them right. A good majority will suffice. 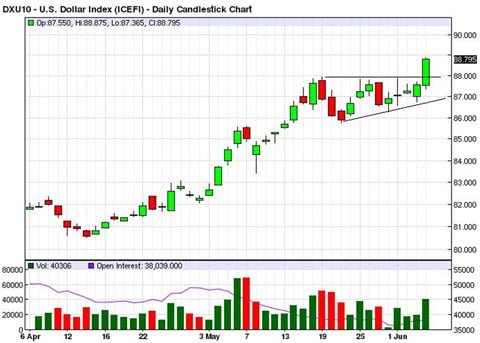 Above is a daily basis chart of the U.S. dollar (candlestick) showing Fridayâ€™s breakout to the upside confirmed by a high volume day. With gold plunging Friday morning and the dollar breaking out upside, it was a scary moment for gold bugs. Fortunately, gold rallied strongly in the afternoon. It made up all the morningâ€™s losses and put on a solid gain. Indeed, GLD (the gold trading instrument which has the latest close) completed a bullish engulfing pattern, a candlestick signal predicting higher prices.

It seems that the markets are saying that the old scenario of gold moving opposite to the dollar (and with the euro), which dominated much of the last decade, has changed. Now the scenario is that all paper money is collapsing against gold. And for the past 4 months, the dollarâ€™s rise against the euro (and other currencies) has been accompanied by a nice gain in gold.

This illustrates the importance of perspective in trading the markets. All of a sudden, as soon as your own money is at risk, everything looks different. When you were paper trading, you were calm and rational. But now your perspective has collapsed. â€œHoney, could I have the paper? I need to see what my stock did today.â€ An hour now feels like a week, and waiting for the end of the day seems like eternity. With your perspective out of whack, your judgement follows, and soon your paper trading profits turn to real losses. (This, by the way, is why I do not recommend paper trading. Instead I recommend trading with modest amounts of money. That will give you the sense of what speculation is really like, and you will learn to make sound judgements in difficult circumstances.) 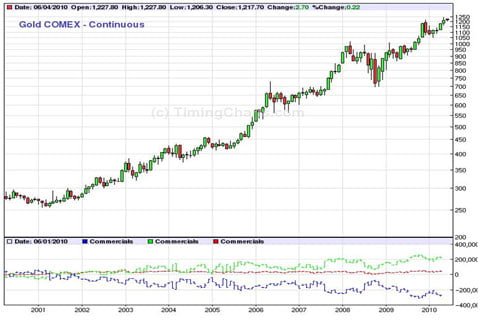 And yet, the long term trend is so much easier to play than the short. Look at the trend in this gold bull market. Surely this trend has been our friend. All commodity markets, by the way, are not like this. Each has its own peculiarities, which must be learned by experience. But gold is a good chart commodity. It is produced all over the world, and it is purchased all over the world. Many people, each day, are buying it and selling it. That, of course, is what technical patterns are intended to comprehend, how the average person thinks and what he will do.

The average person, as I have noted, commits the fallacy of the fair price. He believes the teaching of Thomas Aquinas that there is a fair price for every good and that a good ought to sell for its fair price. He does not understand the teaching of Adam Smith that any price agreed upon between buyer and seller is fair, and therefore the crucial determinant of price is supply and demand.

Let us say that our average fellow makes the mistake of selling gold on Feb. 5, at $1,050. â€œOh, did that hurt.â€ He wishes he had not made that move. Well, the answer seems simple enough. If you regret selling, then go in and buy it back. â€œOh, no, I couldnâ€™t do that.â€

Why, having regretted his sale, can he not go back in and buy? This puts him long of gold again and corrects his mistake. But he cannot buy here at $1,220 because the fair price for gold is $1,050, and he would be overpaying by $170 (he thinks). In short, because Thomas Aquinas did not tell him how to calculate the fair price, he confuses the fair price with the price that is in his mind. It could be the price he is used to because the good has been trading there for a long time. It could be a high or low point on a chart that stands out and comes to peopleâ€™s attention. It could be a price with a great deal of volume. And, very frequently, it is the price at which he sold (or bought).

Therefore, if the price of gold did get back down to $1,050, our average fellow would rush to buy it because it was now back down to its fair price. And since $1,050 stands out on the charts, many other people would rush to buy at the same time. This buying is called support, and $1,050 is a support level. The corresponding level at which many people will come in to sell is called resistance.

Once we understand the support and resistance levels, by inference we can figure out the larger trend. In the chart above, gold continues to go to new highs, breaking resistance to do so. Every time resistance is broken the bullish trend is reconfirmed. Look at how many times this has happened over the past 10 years.

The old timers noted this phenomenon many years ago. Most market trends are caused by large-scale forces too big for most traders to comprehend. They wind up assuming that current prices are near the fair price, and they are reluctant to pay more. This reluctance slows down the bull trend, but the fundamental, large scale force keeps tilting the balance to the upside. In effect, the idea of a fair price keeps the market undervalued for a long, long time. The old timers expressed this by saying, â€œthe trend is your friend,â€ and this is as true today as it was in the early 20 th century.

Eventually every trend does reverse. But it continues much more often than it reverses. Gold has continued to new highs 8 times since 2001. It has not reversed to a relative low once. In case after case, in good after good we see these giant bull (or sometimes bear) markets that continue for year after year. As we look back from the vantage point of the future and think back to what we were saying at the beginning of the trend, we are amazed. â€œI was so certain that gold could never get above $70 in 1974.â€ â€œI laughed at Robert Prechter for predicting DJI 3500 in 1982.â€ â€œI was absolutely certain that T-bill rates could never get to zero.â€ But in all of these cases, the trend progressed far beyond almost anyoneâ€™s ability to predict. All you could say was, â€œThe trend is my friend.â€ And this kept you long as the market went up and up.

It is undoubtedly the same with the current bull market in gold. This trend will probably go on much longer than anyone now thinks. Indeed, the best prediction of the grand cycle bull move in gold of the 1970s was made by Jim Dines. When asked, early in the decade, how high gold would go, Dines replied that he did not know how high gold would go or how far stocks would fall, but the two numbers would cross. At the time he made that statement, gold was only a little above $35/oz., and the DJI was close to 1,000. It seemed a fantastic prediction. But on Jan. 21, 1980, gold hit an interday high (on the Comex) of $875/oz., and the DJI closed at 872. That $875, by the way, represented a 25-fold multiple for gold in nominal terms and a 12Â½ multiple in real terms. Between 1966 and 1982, the DJI fell by about 75% in real terms.

It is, of course, tempting to make the same prediction for this grand cycle trend â€“ that gold and the DJI will cross. I am too much of a scaredy cat to make that prediction here, and I think that I will follow the same policy I followed through the 1970s. Turn bullish as the trend broke to the upside and then follow the trend until it had a clear reversal (which turned out to be the giant one-day reversal of Jan. 21, 1980). At that time, the trend was my friend. Today the trend is still my friend. And the trend can be your friend also.

As the trend in gold was nearing its end, circa 1978-79, the speculative end of the precious metals group (silver, the exploration stocks) came to life and made tremendous gains. I look for that to happen as the present bull trend in gold nears its end. That will be a warning sign. Before it happens, we are safe on the bull side. After it begins, we still have a little time.

Now there are a few people who espouse fundamentals and do not look at the trend. These people are called brokers. They make their money on commissions, not profits. For this they need a lot of customers, and so they follow the policy of telling the average person what he wants to hear and what is useful to them (the paper money theories of Foster and Catchings and Keynes and the fair price theory of Thomas Aquinas). Brokers are friendly, but I do not advise listening to them if you want to make money because they are not even trying to discover economic truth. Furthermore the fundamentals being taught in academia and published in newspapers and magazines are a collection of trash. (Keynes was a deliberate fraud and did not believe Keynesian economics.) To make sense of the markets with this false information is almost impossible.

Note: The One-handed Economist is written every two weeks (dated Friday) and posted on our web site (www.thegoldspeculator.com) on Saturday/Sunday (password protected). Special bulletins are written when the market says something I think is important, and one was written June 4 (analyzing last weekâ€™s behavior and giving guidelines for gold). Sorry people, but I do not have time to answer individual questions about the markets, but your questions are useful to me, and I may discuss an issue in the newsletter if enough people write in about it.