â€œHow blind are those who cannot see the forest for the trees?â€ 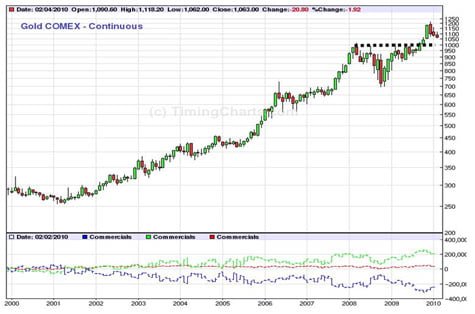 It has been noted by the theorists of contrary opinion that, whenever there is a powerful move in the financial markets, it is preceded by a widespread opinion in the exact opposite direction. When the gold bugs of 1970 advocated buying gold (at $35/oz.), they were widely ridiculed, and Henry Reuss (Chairman of the House Banking Committee, based on the advice of the most widely regarded economists of that day, predicted that it would fall to $6/oz. Gold bugs were sneered at and made the butt of jokes.

Gold then multiplied by a factor of 25 times. Those who followed the establishment and kept their money in â€œgood sound stocks for the long pullâ€ then lost 75% of their wealth (in real terms) from 1966 to 1982l.

We see this over and over again in our society. The â€œexpertsâ€ seem to be repeatedly wrong. Look at all the marriage counselors who are themselves divorced. Look at the â€œbest and the brightestâ€ who lost the war in Vietnam. Look at the Nobel Prize Committee, who awarded the Peace Prize to Barack Obama just before he led the country into a second war. Look at the economists who are leading the country into one disaster after another.

This concept that the â€œexpertsâ€ are repeatedly wrong is so common in economics that it has a special name: the theory of contrary opinion. A good example of this is the bottom in gold in 1999-2001. At that time, even the gold mines were so bearish that they were selling short (under the euphemism â€œselling forwardâ€) their own product.

You know the normal optimism in any business about its own product. No matter what the facts they are perpetually optimistic. It sort of goes with the territory. And yet at the turn of the millennium, the gold mines were bearish on gold. They paid for that one. Investors looked for mines who were more rational and created the HUI (as opposed to the XAU), and all you have to do is to look at the difference between the two indexes for the first 5 years of the decade.

Well, we are once again in a period of extreme pessimism on the subject of gold and gold stocks. As we can see from the chart above, gold stalled in its uptrend once it hit $1,000 â€“ from March 2008 to October 2009. What was the reason for this year-and-a-half of sideways movement?

Part of the reason was that $1,000 is a round number, and round numbers attract selling, especially when there are profits to be taken. Another part was that gold had hit the price objective line from the large symmetrical triangle of 2006-07. But the most important reason was that the New York Times unleashed a barrage of propaganda against the commodity markets claiming that the country was in a massive â€œdeflationaryâ€ period and that prices of real goods were going down.

Of course todayâ€™s New York Times is not the great paper of Adolph Ochs. Ochs was a gold bug back when the term was coined, in 1896 when William McKinley ran against William Jennings Bryan on the issue of the gold standard. Bryan gave a famous speech saying,

â€œYou shall not crucify mankind upon a cross of gold.â€

Bryan went down to defeat, 51%-46%. He was defeated by the same margin in 1900. And he ran for a third time in 1908 and slipped to 43% of the vote. America retained its gold standard for another generation and remained the greatest economic power in the world.

The Times went Republican in 1896 because Adolph Ochs understood that paper money helps the rich at the expense of the common people.

But the Times of 2008 had deteriorated badly from the days of Ochs. Today it has a socialist columnist on its Op-Ed page. It was perpetrating the idea that, even as the Fed created money in the trillions of dollars, there was going to be a â€œdeflationâ€ which came out of nowhere and engulfed the economy.

In actual fact, the decline in consumer prices of late 2008 lasted for exactly 3 months, and this followed hard on the heels of (and was caused by) a corresponding decline in commodity prices which lasted from July to early December. This decline was caused by commodity speculators who were scared by the Times (and the media which follow it) into selling. Gasoline at the pump is a good example. Crude oil peaked in July 2008 at $145/bbl and declined to $35/bbl in Dec. â€™08. You remember that during this time gas-at-the-pump fell from $4.00 to $1.50 per gallon. This is an illustration that consumer prices were falling because commodity prices were falling, and commodity prices fell because the Times scared the daylights out of commodity speculators. This is what is called a self-confirming hypothesis. This is an idea which, although false, causes people to act in such a way as to make it appear true, at least in the short term.

The influence of the Times on crude oil was also felt in another way. When crude was about $120/bbl in the spring, the Times ran an article about an economist who was predicting $200/bbl. This did not happen, but speculators who read the article helped push crude up to $145. In short, the Times is sticking its nose into the crude oil market, pushing the price up too high and then pushing it down too low. That is the reality of what was going on in the economy in 2008.

It should also be pointed out that a â€œdeflationâ€ coming out of nowhere and engulfing the American economy is a fantasy akin to that which motivated the Salem witchcraft scare of 1693. There is no occasion in American economic history in which prices have moved down (or up) without there first being a Government-caused decline (or increase) in the money supply Indeed, the decline in money supply which led to (what is incorrectly called) the Great Depression was explicitly called â€œa good five cent cigarâ€ by its Republican supporters (because it was intended to reduce the price of cigars from 10Â¢ to 5Â¢ and all other prices accordingly) From 1930-1933, the U.S. money supply fell by about 30%. Since prices fell more rapidly than wages, real wages rose. This caused the high unemployment of the time. However, with the large majority of the people remaining employed and receiving higher real wages the period cannot be called a depression.

So 2008 was a period where people were misled by crackpot economics, and their actions at that time were proven badly wrong. Gold, for example, went from $700/oz in October 2008 to $1200/oz. in Dec. 2009. But the crackpots are still active. They are trying again to whip up the idea of coming â€œdeflation.â€ Thursdayâ€™s drop in gold was due to the decision of the ECB to crack down on Greece and rein in its money expansion. People interpreted this as bearish for the euro and bought dollars. But it is precisely this kind of discipline which is making the euro the worldâ€™s strongest currency. Every time they reaffirm their commitment to it the euro becomes a better currency to own (or have oneâ€™s assets denominated in). To use this as an occasion to rush into the dollar reflects the mentality of the New York Times and the sellers of 2008.

So if we keep in mind the theory of contrary opinion, which says that before any important up move in the markets we are going to witness a strong bearish sentiment, then in the present era we have two such bearish periods:

Thus these contrary opinion considerations support our other technical studies, particularly the giant ascending triangle of 2008-09, which broke out on the move to $1,229 and is predicting a much larger move to come. We are at a fateful hour. If gold gets as low as $1,000, it will be the buy of the decade, and those intelligent enough to take this opportunity will have much of which to be proud in the future.

Establishment sources will try to steer you away from gold and into (conventional) stocks. There are times when this is the best play, but now is not one of those times. It is always necessary to think in terms of the commodity pendulum. During the last downmove in the pendulum (1980-1999), commodities went from CRB 337 to CRB 183. At (roughly) the same time, the S&P 500 went from (just over) 100 to 1500. At this point, commodities and stocks had gotten completely out of sync with each other. Stocks were terribly overvalued, and commodities were terribly undervalued. It was the same situation which existed in the early 1970s except the over-and-under valuations were much more extreme.

The way this was resolved in the 1970s was that commodities began a very large move to the up side, and stocks tanked. At present, the bear market of Oct. 2007 to March 2009 was an indication of underlying weakness in stocks. If the Fed tightens, stocks could be hit hard. This is why gold is the safest play. In the general bear market of second half 2008, gold bottomed in October. Stocks kept going down for another 5 months. Further, stocks topped out in October â€™07 while gold kept going up until March 2008. In all markets, at all times, mistakes are possible and reactions part of the normal course of events. But here, in the second upswing of the commodity pendulum being in gold is safe; being in stocks is dangerous. A decline in stocks similar to 1973-74 (which was the first upswing of the commodity pendulum) would be brutal.

And the establishment of today is singing the same song it sang in the late 1960s: buy and hold good, sound stocks for the long term. Already that strategy has failed for the entire first decade of the new century. Yet the establishment never admits it was wrong and never learns from its mistakes.