Oh, traders smart put out the buys.
The price of gold is on the rise.
The price of stocks is very grey.
They sell in May and go away.

So gold bugs have a smiley face.
It rises at a rapid pace.
But stock bugs have a face thatâ€™s long.
And thatâ€™s the message of my song. 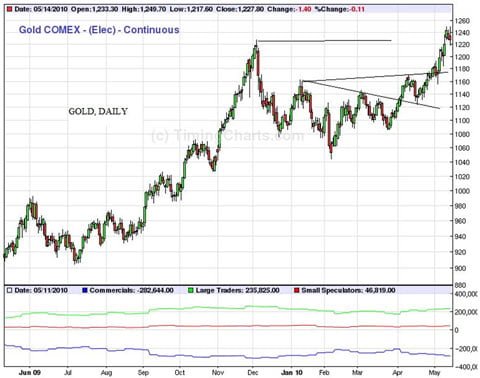 The recent price action in gold provides many examples of good speculation.Â  Indeed, good speculation is not complicated.Â  The main problem with modern speculative analysis is that it is so full of false theories.Â  It reminds me of Ronald Reaganâ€™s statement, â€œWell the trouble with our liberal friends is not that they are ignorant.Â  It is that they know so much that isnâ€™t so.â€Â  (Of course, in my book that could be a pretty good definition of stupid.)

The problem with modern speculation is that there are too many mathematicians in the field who are trying to show off how much mathematics they know.Â  Somebody has to say to them, â€œStop, simplify.Â  When you learn a new principle, ask yourself, does this work in practice?â€Â  Because, if it doesnâ€™t work, then your brokerage account is not going to grow bigger.

One of the rules I have found most useful in trading the different markets is to make a special study of each market.Â  Each has its own peculiarities, and one has to learn which principles apply best to which particular market.Â  One market may be seasonal with certain patterns appearing at certain times of the year.Â  Another market may be technical with chart patterns and trend lines giving the best predictions.Â  A third market may be weather-dependent.Â  To have a big crop, the weather must be just right at key times of the year.Â  As this market approaches one of these key times, everyone is focused on the weather, and the prevailing weather theories (be they right or wrong) become very important in forecasting price movements.Â  Therefore, it is important that you devote the time and energy to get to know a market before trading it.Â  And since nothing quite focuses your mind like having your own money at stake, it is a good idea to trade a market, at least with a small amount of money, while learning it.

I like the gold and other precious metals markets because they are general commodity markets.Â  Indeed, the basic argument for gold is that the value of the dollar (or any other paper currency) is going down (in terms of real goods).Â  This decline in the value of the dollar affects each commodity to some degree, and the result is that gold acts like a general CRB index.

In addition, gold is widely traded, and therefore it follows the basic technical theories, which depend on certain widely believed (but wrong) principles.Â  Your fellow traders following these wrong principles are going to lose money, and what better place for this money than in the pocket of a nice fellow like you?

In our chart above, the action begins with a late summer bottom followed by a strong up move through the autumn.Â  (Here the absolute bottom came in July; often it is in August; at any rate a buy in late August almost always gets much better immediate action.Â  It is a lot more satisfying to see your account go promptly into the black than to have to wait for a while flirting with small losses.Â  At the worst, there have been a few cases where the decline persisted into October (2006, 2008)Â  , but even then there was a strong rally through the rest of the autumn and into the winter.

The chart continues up to $1,225 in early December, and this happens to be the exact price objective defined by a symmetrical triangle which formed over the middle part of 2009 (not fully shown).Â  Since markets will usually react after reaching such a price objective, this was an important clue to my prediction of an intermediate decline in gold on Dec. 2, 2009.

The decline of Dec.-Jan. rounded over into two overlapping head and shoulders bottoms.Â  The first of these has the left shoulder in late December, the head in early February and the right shoulder on March 25.Â  Its neckline is downward sloping, and it broke its neckline on April 7.Â  Then it made its final return to that neckline on April 19.Â  When a chart obeys several technical signals in this way, we can be confident that the signal is valid.

The second of the two overlapping head and shoulders bottoms has the same left shoulder and head, but its right shoulder came on April 19 (the same move which constituted the pull back to neckline for the first bottom).Â  It then turned and broke its (slightly upward slanting) neckline on April 30 and for the last 2 weeks has been powering higher.Â  This second bottom still lacks a pull back to neckline (which would probably occur around $1,180), and we have to be wary for that.Â  But it has propelled gold to an all-time high, and the price objective from the second head and shoulders bottom is around $1,290-95.Â  The price objective of the first head and shoulders bottom, by the way, was $1,230, and this was hit this past week.

Pull backs are a vexing problem in technical analysis.Â  One very rarely sees a technical breakout which is not followed by a pull back.Â  However, the problem is that there is no clue as to when that pull back will begin.Â  The symmetrical triangle in gold of 2006-07 kept going up and up without a pull back.Â  Finally when I had given up my expectation, the pullback came (March to October 2008), and it was certainly a whopper.Â  Perhaps some future technical genius will discover how to predict when these pull backs will start.Â  Right now all we know is when they end.

The important technical accomplishment of this week is the break of the Dec. 3, 2009 high at $1,225.Â  On a long term chart, this reaffirms the long term gold bull market.Â  A bull market is defined by a pattern of higher highs and higher lows, and the new high is now in place.Â  Indeed, Fridayâ€™s action constituted a short term pull back nicely to the Dec. 3 high.Â  (Such short term pull backs are very frequent and do not substitute for the more normal pull back.)

By the way, the best discussion of such chart patterns and how to use them to predict price movements that I have found is Technical Analysis of Stock Trends by Robert Edwards and John McGee.Â  It is a book which has stood the test of time and is often referred to as the Bible of technical analysis.

Remember the advice of Baron Phillipe Rothschild, who said, â€œBuy when thereâ€™s blood in the streets.â€Â  The Greek â€œcrisisâ€ was an attempt by the European paper aristocracy (with support from the American paper aristocracy) to destroy the euro as a quasi-hard currency.Â  Now the precedent has been set that, whenever any obnoxious gang of thugs and criminals want to bully Europe into giving in to their demands, all they have to do is to destroy property and kill people.Â  The media will declare a crisis, and the countries of Europe will reward them for their behavior.Â  But, of course, since there is no country in Europe (or in the world) which has extra money lying around for such occasions, the way that the Europeans came up with the money was (is) to print it out of nothing.Â  At this writing, Jean Claude Trichet is in the bond markets buying securities with newly printed paper.

Of course, the printing of paper money is extremely bullish for gold.Â  However, you remember those days, and you remember how gold swooned every time the euro fell.Â  The reason is that the propagandists for the paper aristocracy were trying to create a sense of crisis (meaning bearish crisis) in order to justify the printing of more euros.Â  You remember how the word â€œcrisisâ€ was in the news almost every day.Â  Your fellow traders fell for this (deliberate) lie because they read the news media.Â  They sold gold on March 25 and April 19.Â  Yet the chart tells us the truth.Â  The chart was not scaring us or trying to play on our emotions (as the paper aristocracy was).

Since the paper aristocracy does not produce any real wealth, they have to steal what they get, and their method is counterfeiting (i.e., the printing of paper money).Â  For them to get rich, the average person must get poor, and their propaganda is directed at the average person to give him a wrong view of reality.Â  I canâ€™t save most people, but I can save you â€“ if you will make a commitment to see reality as it is.Â  Simply close your eyes and say to yourself (sincerely), â€œI promise myself to make the best effort I can to see reality as it is: not as I want it to be, not as others tell me, but as it is.â€Â  That will be your first step toward becoming a successful speculator, and many times that will save you when nothing else can.

To help you see reality as it is, I publish a fortnightly (every two weeks) newsletter, the One-handed Economist (cost $300 per year).Â  Starting just before the turn of the millennium I started a model conservative portfolio (at a theoretical $100,000).Â  This week the Model Conservative Portfolio finished just shy of $190,000.Â  The average equity mutual fund was unchanged over the same period.Â  In the not-too-distant future, I hope to announce the doubling of the portfolio.Â  I keep telling these equity fund managers that they should get out of stocks and into gold, but it is talking to a wall.Â  If your baseball team is a loser, then it doesnâ€™t take much brains to know that you need a new manager.

If you need a new manager for your money, then I suggest you subscribe to the One-handed Economist.Â  (We donâ€™t actually manage money.Â  We simply give our best recommendations on what to do and leave the final decision to you.)Â  You may visit our website, www.thegoldspeculator.com and pay via the Pay Pal button ($300/year), or you may send a check for $290 ($10 cash discount) to: The One-handed Economist, 614 Nashua St. #122, Milford, N.H. 03055.