Fridayâ€™s Wall Street Journal was full of â€œoptimisticâ€ news for the U.S. economy. It reported:

To chart retail sales and present this as something good for the whole country is lunacy, the kind of lunacy knows as Keynesian economics. Retail sales are of interest to retailers. The country does not get any richer via an increase in retail sales. It must be asked, who is doing this extra buying and where are they getting the money? The answer, in this case, is easy. The Federal Reserve is printing the money out of nothing. Can simply printing money create real wealth? Last week we saw Thomas Jeffersonâ€™s view that it cannot. And the United States, under the wise leadership of such men, emerged as the leading economy in the world. Today the idiots are crying for a government â€œstimulusâ€ of the economy, a system which has been tried in a great many countries over the years and has been an absolute disaster every time.

So what is this pickup in sales in November? It is simply the first bit of the newly created money to start making its way through our society to the point where it is visible in the economic indicators. That money will soon cause a general rise in prices, and the result will be that you get poorer. So the retailers get richer, and you (and others like you) get poorer. Can anyone explain how this is good for society as a whole?

It is difficult to understand how idiocy like this gets parroted throughout our society when the only proper place for it is the mental institutions of said society. Less than 10 years ago the pages of the Wall St. Journal were full of articles warning of a massive â€œdeflation,â€ mostly focused on commodities. Here is what happened.

The (less than) 50 point decline in the CRB in early 2001 was enough to set the WSJ off kicking, screaming and predicting â€œdeflation.â€ Article followed article threatening a terrible disaster. By the end of the year, the CRB was very close to its long-term low just above 180. Today it is flirting with 600. And what was the Wall St. Journalâ€™s comment about the 400 point rise over the past 9 years? Not a word. 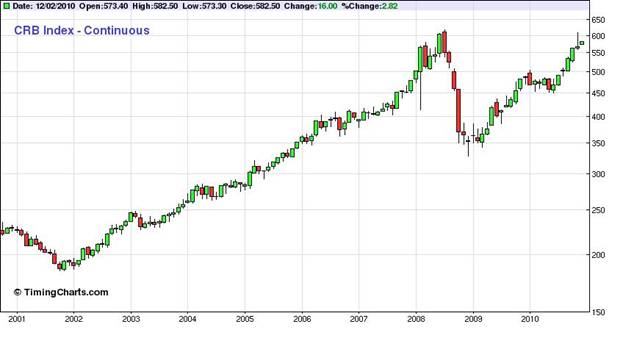 Again, in late 2008, there was a similar commodity decline. You remember the media hysteria which triggered that decline. Large numbers of commodity speculators were frightened into selling by lies in the major media. Believe the media and lose your money. That decline has now been almost completely recovered, and it is not difficult to predict (unless one writes for the Wall Street Journal) a massive commodity advance which will make the 6 month decline of late â€™08 appear petty by comparison.

What do we know about countries which experience long, steep declines in prices? Well, the primary example of this is the United States, which experienced a 30 year decline in prices from 1866 to 1896. An item which cost, on average, $1.00 in 1866 was down to 33Â¢ in 1896. This was the period which marks the transition from an agricultural to an industrial economy. It was the period of great inventors, such as Thomas Alva Edison, who created new products which dramatically improved the lives of the average person. It was the period when millions of people flocked to America from all over the world because, in a figurative sense, the streets were paved with gold. Americaâ€™s great prosperity during this period resulted from the fact that the gold standard had been restored (after the Civil War) in 1879 and remained in force for 54 additional years.

Now what about countries which experience long, steep increases in prices? The most dramatic case which comes to mind was Germany in 1914-23. During this time average prices rose by 1 trillion to one. The middle class was wiped out, and the people, in anger and frustration, voted for Adolf Hitler, who was also a paper money advocate and who in 12 years turned the country into a mass of rubble.

Even worse than Germany was modern Zimbabwe, where prices went up by more than 1 trillion to 1. Life expectancy dropped from 60 years to 40 years. Unemployment reached 90%, and there were reports of starvation and cholera. This happened just a few years ago, and yet there was hardly a word in the American media.

A very dramatic case was that of Britain. Under its gold standard Britannia ruled the waves and remained very close to the U.S. in economic progress. But in 1931 she gave up gold, and in 1946 Britain elected a group of Keynesians to run the country. Almost immediately, the British pound collapsed. From being the leading country of the world, Britain became just another European country. From the empire upon which the sun never set, Britain set.

You can see the same thing happen with the United States. Starting one year after the abolition of the gold standard (or the last, slender tie to gold) real wages in the United States started to decline. When I discovered this (in the late 1970s), I sent out a press release to the 100 biggest newspapers in the country (virtually all of them claiming to be pro-labor). Wasnâ€™t this the biggest news of the decade? Yes. Did any of the papers print this news? No. Where can you find truth these days? In the nationâ€™s newspapers? Not a chance. A collection of liars and frauds.

So you see that more human actions are motivated by the desire for wealth than most people will acknowledge. For example the paper aristocracyâ€™s desire is for more paper money, and this enriches them in the same manner it enriches the counterfeiter. They consume goods which they have purchased away from you with their counterfeit money. You get poor, and they get rich. The paper aristocracy, by the way, is my name for those people who benefit from paper money and who exert their political force to keep it going, by analogy with the medieval aristocracy, who also controlled the government and used it to take from the poor and give to the rich. The nationâ€™s newspapers, on the other hand, have a different scam. They pose as the champions of the poor (to get readers) while they are pandering to the super rich (again the paper aristocracy). So the last thing they want to do is to alarm their readers by telling them that they are getting poorer. This is why the nationâ€™s media cooperate in one amazing lie after the other.

Of course, as a speculator in the nationâ€™s financial markets, you cannot afford to deal in lies. You must see reality as it is. When on Sept. 15, 2008 the New York Times declared a financial crisis with â€œdeflationaryâ€ overtones, speculators in these markets believed the Times, panicked and rushed to sell. Crude oil (which the Times had been bulling in May) had hit a high of 147 in July of that year; it fell to almost 35 by December. The CRB fell almost in half. Those speculators who believed the Times were slaughtered. The Times, itself, did not fare too well either. The price of their own stock (in which they had invested heavily) declined from 40 to 4, and they had to take a loan from Mexican billionaire, Carlos Slim.

Slim says that he is focusing on â€œmainly mining.â€ He is ranked by Forbes as the richest man in the world (ahead of Bill Gates), and recently rumors circulated that he was about to buy out the Ochs-Sulzberger familyâ€™s control of the Times.

But the question for you, dear speculator, is where do you want to put your money? Below we have the 10 year chart of the price of gold, and it is obvious which financial good is burning up the track. During this time the stock market is flat, but gold keeps climbing to new highs. 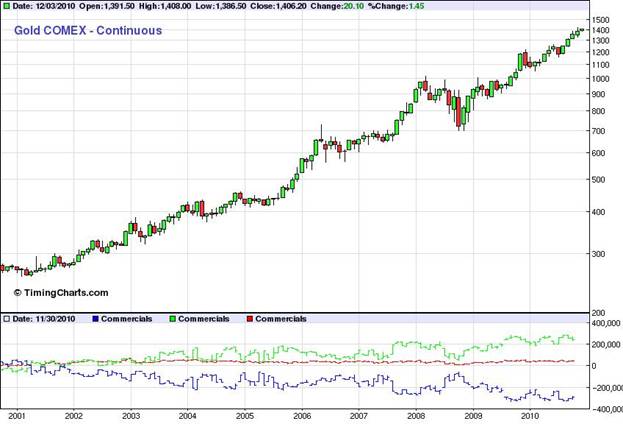 The chart above shows the 10 year bull market in gold. Of course, no tree grows to the sky, and over time any financial good will have both ups and downs. But it should be obvious what we first noted in December 2002; gold is on the move. It is an old saying of market speculators that the trend is your friend. This means that trends continue on for far longer than anyone expects, but the trading community refuses to believe. Finally, after the move has gone beyond what everyone expects, there comes a time when the speculators begin to believe. In the first grand cycle bull market in gold (1970-80), this happened in 1979. The newspapers, which were bigoted and biased against gold, were shouting, â€œdouble digit inflation.â€ The price of gold was advancing, sometimes by $50 (8%-10%) per day.

That day will come for the present bull market â€“ but not today. I have been studying the gold market for over 40 years, and my experience is summed up in my newsletter, the One-handed Economist. This newsletter is published every other Friday (posted on our website the following day) for $300 per year. Special bulletins are published when the market is moving rapidly, the most recent being Nov. 30, 2010. To subscribe, visit my website, www.thegoldspeculator.com, and press the Pay Pal button. Or, send $290 ($10 cash discount) to The One-handed Economist, 614 Nashua St. #122, Milford, N.H. 03055.

The markets are moving rapidly, and now is the time to heed the old adage, he who hesitates is lost. Thank you for your interest.