Gold and the Budget Deficit

This was solid confirmation of what everyone knew. Gold goes up when prices are on the rise. Of course, the gold bugs of 1979 overdid things a bit. They more than tripled its price between Jan. 1, 1979 and Jan. 21, 1980 while the general price level only went up 13%. But it certainly did make the point. And this tells us that, if there is another panic about prices in this country, the price of gold will take a trip to the moon. 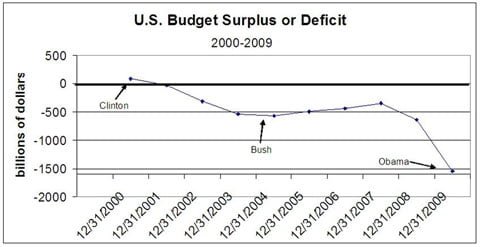 It is hard to remember, but 10 years ago the U.S. had a budget surplus. Bill Clinton told his staff, â€œWe are Eisenhower Republicans, and we are balancing the budget.â€ Bush spent money like a drunken sailor. And Obama is simply not to be believed. The period 2010-2020 shows a deficit starting at $1.5 trillion and then estimates it at about an average of 1 trillion per year.

Of course, budget projections tell us a lot more about the image the Administration wants to present than about reality. What Obama is saying (by his actions) is that he does not care about what is going on in this country and expects that he can lie his way out of any problem.

The importance of this for the price of gold lies in the fact that any deficit of any size in any democratic country is not financed by borrowing the money. It is financed by printing the money.

This began in 1693 in England. England became a democracy in 1688 with the Glorious Revolution. A good, new king (William and Mary), who would cede power to Parliament, was brought in to replace the bad, old king. The new king had been a Dutch prince who was fighting a war with the French. Beyond his war he did not care terribly much about running the country. All England supported his French war. Parliament ran the country, and the King fought the French.

Then the war took an unfortunate turn for the worse. The King needed more troops and equipment. He went to Parliament and said, â€œGive me a tax increase to fight the war.â€

What to do? The King wanted the money. The Parliament did not want to give the money. Stalemate.

Unfortunately, Patterson had promised to redeem all Â£1,200,000 of his notes for gold, and he had less than 1/16 of the money needed to do so. He could keep his promise only if people did not ask him to do so. Soon people came to Mr. Patterson (who had ostentatiously named himself and friends the Bank of England) and asked him to redeem his notes in gold. Patterson could not pay.

Faced with a crisis, Parliament and the King had to bail Patterson out. They declared Pattersonâ€™s notes to be money just as valuable as the gold which the notes had promised.

And that is the story of every democracy since that time. When the Government ran an unusual deficit, the legislature was afraid to tax the people. So it allowed a central bank to create money out of nothing and lend this to the Government. In the pre-democratic period, when the people were ruled by kings, whenever the king wanted money, he just took it. The way that England became a democracy was that they got fed up with this system, and they killed the (old, bad) king. From then on the king needed the consent of the legislature (elected from the people) to take their money.

So the system of central banking and paper money invented by William Patterson was an end-run around democracy. It was a way for the government to get wealth from the people without the consent of their elected representatives. It was a way to defeat the principle of no taxation without representation. The government would print money (or empower a central bank to print money) and would then seize the peopleâ€™s wealth in the same manner as a counterfeiter. Counterfeiters, as you know, do not steal money. They make the entire community poorer, not by stealing its money, but by using their newly printed money to buy up most of the wealth of the community and take possession of it for themselves. This is the policy which the New Deal introduced in 1933 when it said that its program was to rob and when it gave the power to create money to the commercial bankers in conjunction with the central bank. From 1933 to 2009, U.S. money fell to 1/17 of its original value.

It is this basic program of robbing from the people which Obama has now put into high gear. His projected budget deficits for 2010-2020 average about a trillion dollars a year. As was the case with William and Mary and every occasion since, paper money is used as an end run around the peopleâ€™s refusal to vote the funds which the government wants.

A good example of this is the War of 1812 in the U.S. The pro-war party only secured enough votes by assuring the country that taxes would not be necessary. And the money for the war was raised by loans from the nationâ€™s private banks, who printed up bank notes for the purpose. Then, when the British burned Washington in 1814, the holders of bank notes of these private banks ran to their banks and demanded gold and silver. The banks could not pay. (Of course, when you cannot pay the bank what you have promised, you are in deep trouble. But the banks had the government on their side and thus were allowed to continue in business without paying their obligations.) Senator Daniel Webster declared at this time that Washington, D.C. bank notes had declined in value to 75Â¢ while Boston bank notes were still at $1.00. This is because the Washington banks had printed money and lent heavily to the Government. But Boston was anti-war, and the banks there refused to lend to the Government.

With their bank notes depreciating in value, the banks realized that they could no longer lend to the Government. What was the result? By February 1815, there was peace.

With the above as background, let us address the question of just how much money Obama will be printing over the next few years. The estimated deficit for this year is $1.5 trillion. It gets smaller as we go further out. However, this is usually an attempt to manipulate public opinion. In almost all cases, the actual deficits turn out to be worse than the estimates. Let us assume an average deficit of $1 trillion each year for the period 2010-2014. This would mean the creation of $5 trillion dollars out of nothing.

The raises the question, what is the current U.S. money supply and how does the coming $5 trillion compare with it? In years past, that would have been an easy question to answer. Economists have known what money is for a long time. It is that economic good which is used to buy things. If you can buy typical goods which are for sale in our society with it, then it is money, and since its founding the Federal Reserve System has published data on the U.S. money supply. However, a few years ago the Fed changed its method of computing money. Certain demand deposits (which have always been counted as money) were reclassified as time deposits (which are not money). The owners of these deposits were told that they were still demand deposits, but the public was told they were time deposits. That is, the Fed has been caught red handed. However, they will probably rely on their ace in the hole to get away with it. When the Fed was created, the original gang around Paul Warburg and J.P. Morgan knew that they would have to make things as complicated as possible. Money is a very simple subject. Above I defined money as that economic good which is used to buy things. But modern â€œeconomistsâ€ will tell you that there are 13 different moneys (M-1â€¦..M-13).

In an honest money system, the basic unit will be a physical quantity of some monetary metal, such as silver or gold. You have undoubtedly heard of the pound sterling. That is because a few centuries ago British money was a pound of sterling silver. Under the U.S. gold standard act of 1900, a dollar was defined in law as 25.9 grains of gold (about 1/20 oz.), 9/10 fine. When you exchanged money for an economic good, you gave a physical quantity of gold or silver for the good. No problem, no complications â€“ and the money system which led to the greatest wealth the world has ever known.

Assume that the true money supply has more than doubled since mid-2008 along with the monetary base. That would put it at about 3 trillion today. If Obama increases it by another $5 trillion by monetizing deficits, as above, over the coming 5 years, then the U.S. money supply will multiply by a factor of 2 2/3. Since Obama is too busy making pretty speeches on the theme of itâ€™s not my fault, he will not have time to create any additional economic goods. Therefore, the 2 2/3-fold increase in money will have to lead to a 2 2/3-fold increase in prices. A gallon of gas will cost close to $8. A cup of coffee will cost over $3.00. Perhaps we will have a national median home price of $500,000 (new homes).

With this idea in mind would it be surprising to see a price of gold at #3,000 to $3,500? Of course, for precise predictions it is better to use technical considerations. The fundamentals give us the basic why. The technicals give us confirmation and more precise timing.

Alas, dear reader, you live in an evil age. Americaâ€™s Founding Fathers were great men. They put America on a gold standard and made her rich. But the leaders of the early-to-mid-20 th century were liars and frauds. They are a group of counterfeiters who rob from the poor to give to the rich. Are you going to listen to them or their minions telling you to buy stocks? Or are you going to listen to me and my fellow gold bugs telling you to buy gold? Your life, your choice. To discuss this issue in more detail, I publish a fortnightly economic letter, The One-handed Economist ($300 per year) analyzing the various financial markets (mostly gold) and telling you what is likely to happen and what actions to take. You may subscribe via Pay Pal by visiting my web site, www.thegoldspeculator.com and pressing the Pay Pal button ($300), or you may subscribe by sending a check in the mail for $290 ($10 cash discount) to: The One-handed Economist, 614 Nashua St. #122, Milford, N.H. 03055. OHE is written every two weeks on Friday and posted (password protected) on my web site the next day. Thank you for your interest.