“You Loot I Shoot… Stay Away” – Houston Vigilantes Emerge Amid Outbreak Of Looting, Armed Robberies 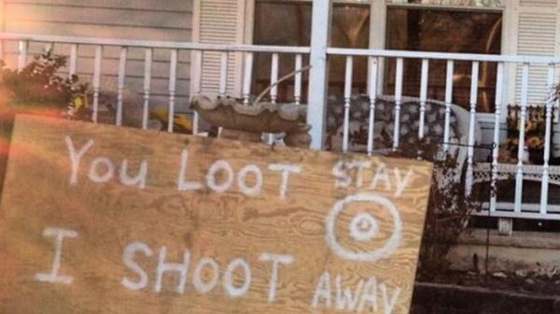 Inevitably every major metropolitan crisis brings out the best and worst of what humanity has to offer.  While hundreds/thousands of people have rushed into Houston following the epic destruction of Hurricane Harvey to help in any way possible, others have once again predictably chosen to exploit the misery of others by looting abandoned shopping centers, robbing empty homes and even breaking into the Houston Apple Store (by shooting through the front door).

The doors to a flooded @Apple Store in #Houston appear to have been shot at with a firearm. Looters have been rampant. #harveyflood #Harvey pic.twitter.com/qyywidgGdV

In fact, just last night Houston’s Mayor was forced to impose a strict midnight to 5am curfew amid “an outbreak of looting and armed robberies“, in order to prevent property crimes against evacuated homes in the city.  As Reuters notes, the curfew came after, among other things, reports surfaced of people impersonating police officers all so they could tell residents to evacuate their homes and then promptly rob them blind.

That proved too little for county officials who set up their own location as an outbreak of looting and armed robberies prompted the city to order an indefinite curfew from midnight to 5 a.m. (0500 to 1000 GMT).

Imposing curfew from 10 pm to 5 am to stop any property crimes against evacuated homes in city limits.

Meanwhile, Houston Police Chief Art Acevedo hosted a press conference earlier this morning to warn residents that his force is not going to tolerate criminals taking advantage of people in the community and that he is working with the district attorney to strengthen penalties for looting and is encouraging judges and juries to impose the maximum penalties possible.  Per ABC 13 of Houston:

He said his officers arrested 14 alleged looters since Sunday. Those arrested will face stiffer punishments under a Texas law providing heftier penalties during a crisis, prosecutors announced Tuesday.

“People displaced or harmed in this storm are not going to be easy prey,” Harris County District Attorney Kim Ogg said.

Burglarizing a home would normally bring a penalty of two to 20 years in prison, but now brings five years to life. “This is the state of Texas. We are a welcoming city, but we are not going to tolerate people victimizing others,” Acevedo said. He said he will push for the fullest prosecution possible for any crimes committed during such a sensitive time.

.@ArtAcevedo: If you (criminals) take advantage of people in our community, we will prosecute you to the full extent of the law.

The Police Chief said his officers arrested a crew of armed criminals robbing members of the Houston community on Monday night. “They found them after a pursuit and took them into custody. He said officers also caught three looters at a Game Stop Monday night.”

The owner of the Bronze Bar in Houston also shared a photo of her business with smashed windows writing, “My business that I’ve worked hard for was looted last night. I can’t believe people are capable of this.”

Not surprisingly, some looters either did not get the message or have simply chosen to ignore it as pictures and videos of criminal activity continue to flood twitter.

Widespread looting reported in Houston as police are trying to save lives pic.twitter.com/lAmPC8NfFf

Earlier, @JeffFlock gave an update from a looting scene at a gas station in Houston. #HurricaneHarvey pic.twitter.com/xUNyNsNjcL

pic.twitter.com/j0r3KEWaao #Warning ! The #looting continues in the #Houston area. This is #disgusting. @newnewspage

Meanwhile, other residents have simply chosen to become vigilantes, and take matter into their own hands…