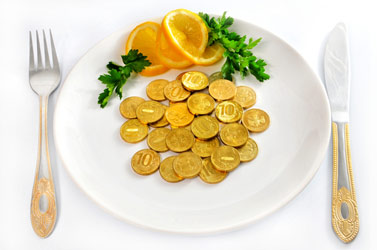 For everything they want gold…

If you’ve conducted even a preliminary investigation into the global economic situation you’ve likely concluded that something isn’t right. As noted previously, all of the evidence points to serious economic failure in the very near future as our day of reckoning approaches. The decline itself has been taking place for years and we’ve seen it happen all around us.  Rather than delve into evermore evidence for why a collapse of our way of life is inevitable, the following guide from our friend Daniel Ameduri of Future Money Trends provides actionable advice designed to preserve your wealth during hard times and protect it from a government hellbent on confiscating it at the first chance they get.

What it all boils down to is owning assets of (real) value. Much of this is dependent on our individual means, but the overall strategy should be similar for everyone: diversification. This can mean long-term food stores, bartering supplies, skills development, acquisition of productive land or, in the case outlined by Daniel below, owning mechanisms of exchange that have been tried and tested for centuries across the entire globe.

Whatever your approach, consider the points Daniel highlights below as you build your own collapse insurance stockpiles. Though his article focuses on gold and silver as future currencies in the event of a US dollar crash, your other supplies should have a similar elasticity and desirability in the (underground) marketplace.

Despite our best laid plans, keep in mind that in a collapse scenario we’ll be faced with situations for which it may be impossible to fully prepare for in advance. That being said, whether you are storing gold or stockpiling food, be sure that at least some of your supplies are portable, confiscation-proof, and easy to trade in a worst case scenario.

7 Reasons You Should be Saving in Gold
by Daniel Ameduri

When it comes to saving a portion of your earnings, an error most people make is to save their wealth in man-made currencies. These currencies are controlled by central planners, regularly manipulated, and created out of thin air without regard for the value of the currency you have in your wallet.

In the digital age, accounts holding these currencies can be frozen, easily confiscated, and tracked.

I personally advocate saving in gold or other precious metals like silver, palladium, or platinum. A combination of truths lead me to this simple savings strategy:

7. Lawsuit proof, not technically, but the fact is no one knows how much gold you have, it is a private matter. Gold is “off the books” when it comes to financial accounting.

6. A history of being money, an independent unit of account that is the same no matter where it was mined or how old it is. It is a constant measurement of value, you can take a gold piece anywhere in the world and it will have value. This is much different than a fiat currency, once outside of your nation’s borders, a currency may not be generally accepted. You also have thousands of fiat currencies that no longer have any value, like the U.S. Continental or the Confederate States of America dollar.

5. It can’t go to zero. Zero value for gold isn’t an option, hasn’t ever happened and never will. The process to get a 1 ounce gold coin to you has hundreds of man hours behind it, maybe even thousands if you consider the full operation of gold exploration, production, refinement, and delivery.

This is the entire point of saving your wealth, you save to not lose. I understand that you can measure gold vs. the dollar, or gold vs. oil, and that its price will fluctuate, but the value in gold itself does not change.

4. The currency printers are hoarding it. When the most powerful group of people in the world, the central bankers, desire to have 1 asset, then that alone should get your attention. Central banks who print the currencies that the masses treat as a store of value, those central banks buy and store physical gold, not silver, not houses, not oil, they own gold! If it is good enough for the masters of this world, then it’s good enough for me.

3. Financial insurance. When it all hits the fan…Be that a government or economic collapse, at the end of the day, gold survives. It still has value in the new world. It also makes for a great “start over fund” for the reasons listed above, it won’t go to zero and it’s private money.

2. Portable. I think it’s important that if you need to, you could easily carry or move your wealth to a different region. Just to give you an idea, $200,000 in gold is about the size of a VHS tape. Your fiat currencies are typically tied up over the weekend and on bank holidays; in fact, even if you wanted to physically get your cash, you couldn’t unless you gave your bank a 72 hour notice for withdraws over $5,000.

It is a safe stash of value that you can tap into when you are in your “golden” years or at anytime throughout your life.

Ultimately when you are saving a portion of your earnings, you want to protect and preserve it. Gold, in my opinion, along with the other precious metals, are the best way to achieve the objective of saving money by preserving both the value of your savings and protecting it from unwanted dangers, like government and civil litigation.

You can follow Future Money Trends via their web site or subscribe to their free Weekly Wealth Digest newsletter for regularly updates wealth building strategies and global commentary.

The argument often put forth regarding gold and silver as collapse insurance  is that “you can’t eat it.”

But even in Zimbabwe, where a loaf of bread cost a trillion Zimbabwe dollars at one point, gold held an important role. Those who had no supplies, or lost them over the many years of currency destruction, eventually resorted to gold panning and trade to acquire food on a daily basis.

The point being that, so long as your asset is desirable somewhere in the world there will be someone willing to trade for it.

Watch the following video and see this concept being applied in the real world:

What’s in your emergency wallet?