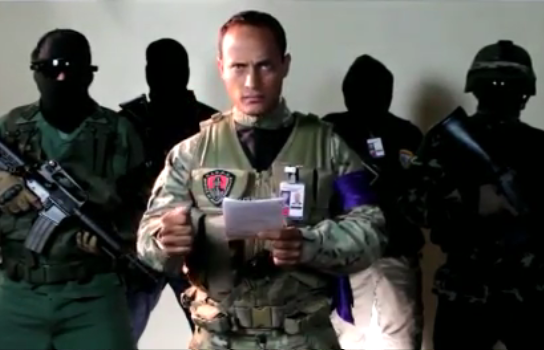 The people of Venezuela have endured unimaginable horrors over the past few years under their corrupt government. Food shortages, record breaking murder rates, rampant inflation, kidnappings, vigilantism, black markets, and civil unrest have all become the norm. However, nothing could have prepared them for the what happened next.

That’s because the unrest in Venezuela took a rather strange turn today, when a stolen helicopter flew over the nation’s Supreme Court and dropped several grenades, before strafing the Interior Ministry with gunfire. The helicopter could be seen waving a flag that read “350 Freedom,” in reference to Article 350 of the nation’s constitution, which grants citizens the right to resist an undemocratic government.

So far no casualties have been reported from this incident. President Maduro has since condemned the “armed terrorist attack against the country’s institutions,” and has stated that “this is the kind of armed escalation I have been denouncing.”

So who was responsible for this brazen attack? If you can believe it, the bombing was committed by a rogue police officer who has worked with opposition figures in the past. But that’s not all. The man is also a high profile movie star in Venezuela.

The rogue police officer behind a helicopter attack on Venezuelan government buildings is an action film star who paints himself as a James Bond-cum-Rambo figure on social media.

The government of President Nicolas Maduro said Oscar Perez, a strapping pilot, diver and parachutist, was responsible for firing shots and lobbing grenades on the Interior Ministry and the Supreme Court after hijacking the helicopter.

In a social media video, Perez said he was fighting a tyrannical, vile government.

Perez, 36, produced and starred in a 2015 Venezuelan action movie called “Suspended Death” about the rescue of a kidnapped businessman, which includes scenes of him firing a rifle from a helicopter and emerging from water in scuba gear.

He has an unusually public profile for the usually tight-lipped and secretive investigative police.

Videos have since surfaced on Instagram, showing Perez flanked by masked gunman, as he reads from a script and denounces the Maduro regime. During the first video he claimed that he was part of “a coalition among soldiers, policemen, and civilians seeking balance and opposing this transitory criminal government. We do not belong to any political party; we are nationalists, patriots, and institutionalists.”

However, as the regime hunts for Perez and condemns his attack on the government, the political opposition fears that his actions represent a threat to dissent in Venezuela.

And yet this is where the comparisons emerge with the “failed Turkish coup” to “remove” Erdogan last summer, which most admit was a staged attempt meant to further entrench the despotic president.

While Venezuela opposition leaders have long been calling on Venezuela’s security forces to stop obeying Maduro, following yesyerday’s event, there was speculation among opposition supporters on social media that the attack could have been staged to justify repression or cover up drama at Venezuela’s National Assembly, where two dozen lawmakers said they were being besieged by pro-government gangs.

To some, the incident has “false flag” written all over it.

But there seemed to be little enthusiasm for the pilot Perez. “It’s a joke. How many people have been arrested for raising a flag? Yet someone who takes a helicopter, gets away,” said Gary Guillen, walking in a Caracas street. “This sounds more like government tactics than anything else.”

Whatever the case may be, one thing is for certain. The total collapse of Venezuela is accelerating everyday. It’s utter chaos over there. What else can you conclude when B-movie action stars are bombing government buildings?

Why We Have A Second Amendment: Venezuela Plans To Give Firearms To Loyalists So They Can Purge Growing Resistance