Word of the Day: “Civil Unrest” ; It’ Here and It’s Spreading

It already happened in Greece. It’s happening in Italy and Spain, and the contagion of unrest is spreading rapidly. The German Supreme Court may have solidified a future for Europe plagued with violence and riots with their decision today to allow lawmakers to move forward with bailout packages for the EU. The Germans, who are by all measures the richest of the union and have the strongest economy (at a whopping 0.1% GDP growth), are now the backstop for the entire $16 Trillion European Union economy – and they’re not happy about it.

While protests outside of Germany will flame because of proposed austerity measures and a destruction in the quality of life of the people in places like Italy, Spain, the rest of the PIIGS and piglets, the Germans will be in the streets for another reason. They, like Americans circa 2008/2009, will be calling in droves for lawmakers to withdraw any support for bailouts, because they, like the American people, know it isn’t going to work and the only result with be further indebtedness and economic malaise. Like the US Congress, however, chances are that elected representatives in Germany will buckle to the will of the European parliament. You can be assured that a lot of angry Germans, historically a very nationalistic culture, will hit the streets – and hard.

Whatever the case with Germand, however, just as has been in the case for the last three years, there is nothing lawmakers in Europe or back here at home can do to stop the sovereign debt collapse of the largest economies on the planet.

We’re going down and over a billion people in Europe and North America are about to get a huge wake up call. Charlie McGrath provides his perspective, and one we happen to agree with:

In 2010 I said the word of the year in 2011 is “austerity” and it is here. Now I’m telling you the word is “civil unrest.” It is here and it is spreading. It is spreading because people around the globe see their leadership buckling under the pressure of these too-big-to-fail banksters, none of them offering a solution, only promises. More and more debt.

If you think it’s different here, it’s time to wake up. The reality of it is this. We have all this drama to increase the debt ceiling, what did we get out of it? Another almost $2 Trillion in debt, and more importantly, the creation of the apparatus in order to implement austerity onto you, the American people. This Super Congress, this body of twelve, that will be able to slash and burn the middle class in this economy in the name of saving this economy.

But when say ‘saving the economy’ we better point out who the economy is. You’re not the economy. You’re nothing more than a debt slave in this economy. The economy are the same above mentioned too-big-to-fails, to date, who have not faced one day of prosecution. Not one day in prison for the crimes they committed not only against this country, but around the planet.

As we’ve opined previously, Europe’s banks will go first, and as Porter Stansberry recently pointed out, the ensuing panic will likely result in tons of capital flows from around the world heading into US Bonds, still believed by many to be one of the last (paper) safe havens on Earth:

The next stage in the ongoing global financial crisis will feature the collapse of both the Spanish and the Italian economies. This should occur within the next six months. Concurrently, I believe the “Chinese miracle” will be unmasked as mostly a fraud powered by a huge increase in bad lending from state-controlled banks.

Ironically, the coming wave of financial trouble will probably force people back into U.S. dollars. Gold will also do well. In the currency markets, I believe the euro will collapse in the second half of this year, as will the Australian dollar, which serves as a proxy for the Chinese economy.

I expect this next “down leg” in the world’s markets to be more severe than the crisis of 2008, because the balance sheets of the Western democracies are now less prepared to manage the losses…

Take special note of that assessment. Money will flow to the US when the panic in financial markets goes full force, but it will certainly not be safe. Three years ago the US committed in excess of $20 Trillion in bailouts, stimulus, and emergency funds for banks and financial institutions domestically and abroad. If it comes to that again, and it will, America will be in serious trouble. You think it’s bad now? What about when we throw another $20 Trillion at the problem with similar (non) results?

The Euro, as Mr. Stansberry noted, may very well take a steep dive before the end of the year. And the US dollar will be right behind it, when the sovereign debt collapse of the largest global economy in history becomes the daily talking point in mainstream media. The likelihood is we will not outright default on our debt, leaving massive, unprecedented monetary easing (alternatively defined for our purposes as monetary and price inflation) as the only viable option.

Americans, who already number in the tens of millions, depending on government to provide assistance, will see their buying power destroyed as prices rise and subsistence checks don’t keep up due to manipulated cost-of-living adjustments. They will have no choice but to take to the streets, just as Europeans are doing. 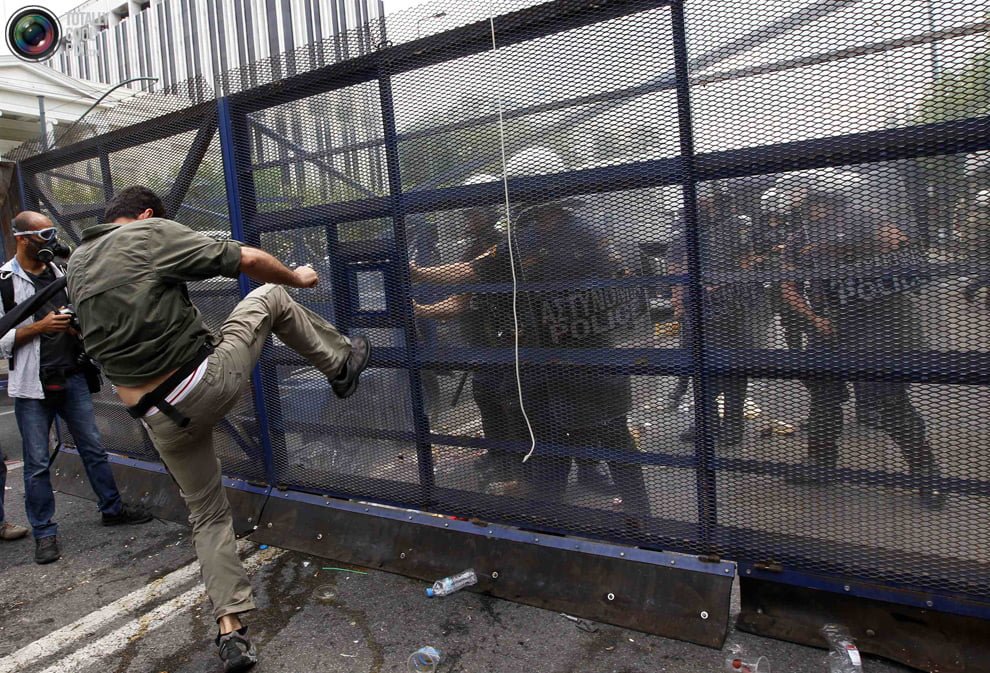 We are watching the collapse of entire nations. This wasn’t supposed to happen in centrally planned and managed economies. But it is.