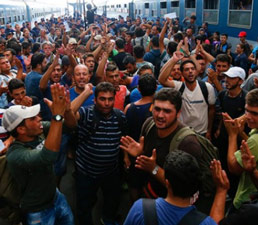 Where firearms and guns have been taken away, people are desperate to turn to whatever means of self-defense they can find.

And in the wake of a total crisis from aggressive migrants and lone wolf terrorists, the people of Germany are lining up in droves for permits to carry non-lethal guns that fire flares, shoot blanks or release gas.

Of course, the purchase of pepper spray and tasers have skyrocketed in the past several years, but with recent events, things have reached a whole new level.

While the governments of Europe continue to invite in unlimited numbers, the people of Germany are not about to stand idly by and risk getting raped, or worse.

Requests in Germany for self-defense weapons permits are hitting record highs in 2016, police data reveals. Firearms ownership experts say people wanting to purchase non-lethal weapons come from all sections of society, “be it workers or professors.”

The new police data shows that Germans are feeling increasingly unsafe in the wake of recent lone-wolf attacks and shootings, which has sparked a demand for non-lethal self-defense weapons.

“As of June 2016, there were 402,301 small arms carry permits in the National Weapons Register,” the Interior Ministry said, as cited by Die Welt.

This figure is almost 50 percent higher than last year when there were just fewer than 270,000 requests for permits in the first half of 2015.

Small arms carry permits or “Kleiner Waffenschein” in German, are restricted to non-lethal self-defense weapons, such as blank-firing and gas pistols, and flare guns.

The political realities may not change overnight, but there is a huge wave of anger against the mass migration that has brought with it the blowback of war and destruction in the Middle East. It cannot be denied that there is a culture war going on in Europe, and its people are preparing to resist whatever attacks may come their way.

As Zero Hedge previously reported, the rise of rapes and other unfriendly clashes between recent arrivals and native Europeans has fueled a backlash of fear and a move to take up arms for personal protection – particularly as governments have made clear they have no intention of stopping the worst of what’s going on:

Despite occasional videos of angry Germans protesting at what has become the biggest “foreign invasion” of Europe since World War II, the German popular response to the wave of migrants, which is now expected to top 1 million in 2015 has been relatively calm. Fear (and anger), however, are building beneath the otherwise calm surface.

According to a report by Focus, following a 600% surge in sales over the past two months, Germany has run out of pepper spray, and the irritating substance can now only be purchased after weeks of waiting. Focus says that according to pepper spray manufacturers, “frightened Germans” have bought out all the available inventory. The alleged reason, according to the German publication: “die Flüchtlingskrise“, or the refugee crisis.

“There is fear” explains Kai Prase, managing director of DEF-TEC Defense Technology GmbH in Frankfurt, one of the major producers of repellents. “For the past six to seven weeks we have been practically sold out.” […] The waiting period has already reached about five weeks.

The invasion of Western civilization is giving rising to nationalism, complete with calls to restrict borders and carefully screen immigrants to filter out those who are the most dangerous.

It is sad that Europeans have been so disarmed that they must literally ask their government for permission to defend themselves; but that reality will not stop people from doing what it takes to protect themselves and their community.