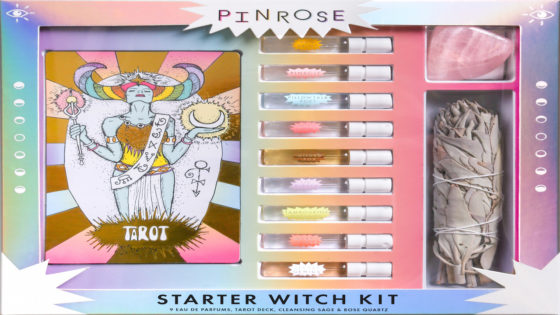 One of the most well-known makeup stores is now in the crosshairs of the social justice warriors and their ilk. Sephora is being accused of “cultural appropriation”  by witches because the company came out with a “starter witches kit.”

Beauty brand Sephora is kicking off the season with its ‘witches starter kit’ made by Pinrose. The kit includes perfume, tarot cards, sage, and a rose quartz crystal. But witches, who identify with the pagan religion of Wicca (or simply practice witchcraft), are not happy with the French company making a quick buck out of their beliefs, according to Metro UK.

Although Sephora declined to comment, they will still sell the witches kit. The starter kit will be available both in Sephora stores and online starting on October 5, according to Fast Company. Not only is that in plenty of time to get every little girl hexing by Halloween, but it’s more than enough time for “real Wiccans” to bemoan the mainstreaming of witchcraft and others to be upset and launch their own inevitable boycott over the pagan display.

“Sephora is definitely guilty of culture appropriation,” said Indigo, who practices witchcraft, to the Metro.co.uk. “I don’t think they’re doing it to spread awareness about the craft, they’re doing it just for profit in my opinion. Although most witches do use what’s in the Sephora box, most of us feel that it’s wrong for just anyone to grab those things and be like “oh hey I’m a witch now” because it’s sacred to us,” Indigo continued.

The packaging itself is a juvenile display of pinks and happy yellows that often are not as often associated with witchcraft as maybe the color black. But that hasn’t stopped witches from being offended and ramping up the blizzard of snowflakes seen in every aspect of everything.

Siera, who identifies with Pagan Witchcraft, told Metro.co.uk,  “Sephora selling ‘witch kits’ actually makes me really upset. Witchcraft isn’t something you just throw around, people put their entire being into this way of life and work so hard at it. I’ve been made fun of way too much for being a witch for it to just become another trend.”

Others, however, see the witches as the ones being guilty of the cultural appropriation they pretend to be offended by.

Modern "witchcraft" as practiced in the Western world is largely based on cultural appropriation ,, you all were the ones who took and twisted indigenous culture to make it a white ppl trend, so cry harder https://t.co/PUPFBedbNq

Still others pointed out that it’s the Native Americans who should be upset about cultural appropriation too since white sage comes in the kit.

Perhaps our society is just a bit over sensitive.  After all, no one is putting a gun to your head and forcing you to buy the kit, unlike Obamacare. Everyone is manufacturing their own anger.  Maybe people just want to be mad anymore.