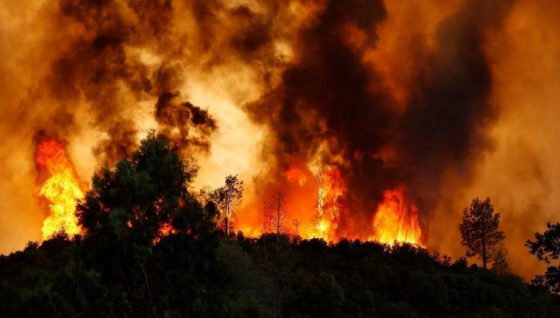 About 300 people have been forced from their homes as two large wildfires rage in Northern California. Firefighters are struggling to control the fires and about 100 structures are currently threatened.

The County Fire, which started Saturday afternoon, is only 3 percent contained, according to the California Department of Forestry and Fire Protection, and it is continuing to grow rather quickly. According to NPR, the County Fire grew by 12,000 acres Sunday night and had scorched more than 60,000 acres by late Monday. Late Monday, Calfire issued an evacuation order for the Berryessa Highlands, Markley Cove, and Pleasure Cove Resorts.

#CountyFire [update] Due to the potential threat posed by the County Fire, the Napa County Sheriff’s Office has issued an Evacuation Advisory for the Berryessa Highlands, Markley Cove, and Pleasure Cove Resorts. pic.twitter.com/4zwz6xFpQb

A second wildfire is also burning to the northwest of the County Fire. The Pawnee Fire broke out more than a week ago and has consumed about 14,700 acres. CalFire says it is already 75 percent contained. Aircrews and firefighters were dropping water and flame retardant on both wildfires and digging firebreaks. Residents in some areas affected by the County and Pawnee fires have been told to leave their homes, reported NPR.

Smoke from the fire has darkened the skies over San Francisco, Napa, Sonoma, and San Mateo counties. “You can see the smoke and you can see an orange-red glow from the flames,” Autumn Edens of the Yolo County town of Guinda, near where the fire began, told AP. “It looks like a movie. I’ve never seen a fire like that up close, and it’s an intense feeling.”

On Monday, the National Weather Service Sacramento issued a warning about the smoke on Twitter, “Due to a wind shift yesterday, smoke from the #CountyFire has moved into the Sacramento Valley and continues to impact the Bay Area as well.”

Due to a wind shift yesterday, smoke from the #CountyFire has moved into the Sacramento Valley and continues to impact the Bay Area as well. Smoke appears brown on top of white marine layer #cawx pic.twitter.com/LVbUUm5ksK

Over the weekend, San Francisco Bay Area residents woke up to orange skies and a dusting of smoke and ash. NWS Sacramento also warns that if you can smell the smoke, you have inhaled it and should take precautions, and avoid prolonged exposure to it.  The San Francisco Department of Emergency Management issued an air quality advisory and respiratory alerts on Sunday, cautioning children, the elderly and people with heart or lung conditions to avoid exertion. The smoke was expected to linger through Monday and possibly longer.

“A lot of friends and family were texting today and saying they were having some PTSD,” Savannah Kirtlink, who evacuated her Napa home during the blazes in December, told KGO-TV. “I’m imagining what they’re going through.”