Why the Global Economy Is Unraveling 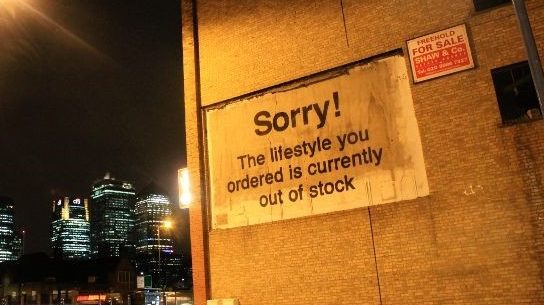 To understand why the global economy is unraveling, we have to look past the headlines to the primary dynamic of globalization: Neoliberalism, the ideological orthodoxy which holds that introducing market dynamics to sectors that were closed to global markets generates prosperity for all.

This is known as Neoliberalism, as liberalizing markets means opening up sectors that had previously been restricted. Neoliberalism holds that global market forces introduce efficiencies and opportunities that then pave the way for growth. Global market forces include not just new buyers and sellers of goods and services but the introduction of vast new markets for credit and risk that far exceed what was available in local marketplaces.

So far so good: opening markets creates efficiencies and prosperity, blah blah blah. But the real dynamic behind this happy-story shuck-and-jive is unprecedented prosperity for those with access to low-cost credit generated out of thin air by central banks.

In other words, introducing market forces leads to the dominance of those who control those forces –banks and corporations. Once a local economy is exposed to global capital, those with the most expansive access to the lowest-cost credit can outbid local buyers, snapping up the most productive assets and dominating the local economy to their own benefit.

Since the core mechanism of Neoliberalism is access to low-cost credit, Neoliberalism concentrates financial power and risk in a handful of financial nodes which every market participant unknowingly becomes dependent on. When a developing-nation village was largely self-sustaining and not exposed to global markets, it was largely unaffected by global financial crises.

But once the village entered the global marketplace via credit-fueled tourism and development funded by global capital, the sudden contraction of credit in a global financial crisis is devastating. Since the village has become dependent on tourism, its self-sufficiency has been replaced by a dependence on wages from tourism and access to goods supplied by global corporations.

Now that the village is dependent on wages, credit and global goods, it is exposed to potentially catastrophic risks that are completely out of its control: the collapse of credit, the closure of foreign-owned hotels and the vagaries of currency devaluation, which may cause the purchasing power of their wages to drop sharply.

Even more perniciously, the flood of global credit washing into the village offers the enticing prospect of buying previously unattainable goods on credit. Globally sourced items such as motorcycles become affordable in monthly installments once the worker abandons farming and takes a wage-paying job at a foreign-owned hotel.

The teleology of Neoliberalism–every human activity must be turned into a market exposed to global credit markets–cannot be reversed once a partially monetized (i.e., a loosely bound system) economy is fully financialized (i.e., a tightly bound system). There is no going back to a localized economy because global markets quickly replace decentralized local marketplaces with markets that are dependent on global chokepoints.

In systems terms, loosely bound systems are interconnected by point-to-point links that do not share centralized nodes. A classic grid of streets and alleys is an example. If one street is blocked, there are many alternative routes to connect two points in a town. In economic terms, loosely bound markets have multiple suppliers and customers, each of which is independent of each other.

Loosely bound markets are structurally flexible and adaptable–what Nassim Taleb terms anti-fragile–and intrinsically stable due to their multiple decentralized connections. Imagine a semi-random arrangement of dominoes: some are close together, others are far apart, some face north, others face southwest, etc. If one domino falls, itâ€™s unlikely to knock over more than a few others.

In contrast, tightly bound systems connect all points through centralized nodes. An example is three lines of dominoes that intersect in several places–nodes in the system. If one domino in any line falls, it will topple every domino in the entire system. Tightly bound markets run supplies, credit and transactions through central nodes; there are few if any point-to-point links that donâ€™t pass through a central node.

Tightly bound markets are thus exquisitely vulnerable to any disruptions in any node. This system may be optimized for profitability, but it is inherently fragile and prone to collapse due to the dependence of every point on tightly bound nodes: if one node fails, the entire system logjams.

The unraveling we’re witnessing is just getting started. The first dominoes have fallen, and there’s no going back to the artificial stability that was sold as permanent stability. Instability and collapse are the inevitable result of the system’s structure.