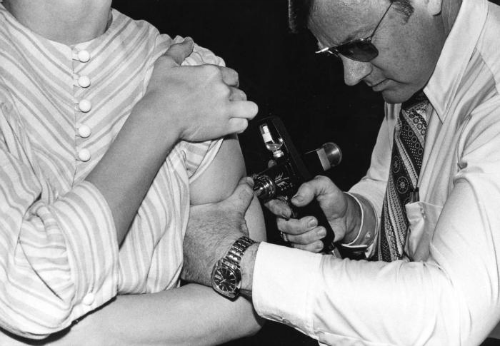 The Eradication of smallpox was arguably one of the greatest medical achievements of the modern era. A disease which killed at least 300 million people in the 20th century alone, was snuffed out after decades of hard work by scientists and doctors, and after over a billion dollars (adjusted for inflation) was spent on vaccination campaigns.

Unfortunately, this achievement could be easily undone with modern technology, and at a tiny fraction of what it initially cost to eradicate smallpox. Last week it was revealed that a team of Canadian researchers managed to synthesize an extinct strain of smallpox, by piecing together several mail order samples.

The horsepox virus the Canadian team created is not a threat to human health — or even the health of horses — should it ever escape from a lab. And it’s not the first virus created by putting pieces of DNA together in the right sequence.

Still, the news that a team headed by David Evans, a professor of medical microbiology and immunology, had accomplished this feat — at a relatively low cost of about $100,000 plus labor — was a bit of a wakeup call. The news was first reported Thursday in Science Magazine.

“This is an example of what modern technologies can do,” noted Dr. Anthony Fauci, director of the National Institute of Allergy and Infectious Diseases.

This is a harbinger for how dangerous our future will be. These scientists have just demonstrated how easy it now is to reconstitute long dead viruses, including smallpox. As one virologist put it, “No question. If it’s possible with horsepox, it’s possible with smallpox.”

The reason why smallpox could be brought back to life in this same way that horsepox was revived, is because there are still small pox samples in existence that can be bought from private companies.

Producing the variola virus in the same fashion would be prohibited under WHO regulations and rules in place in many nations. Labs are not allowed to make more than 20% of the variola genome, and the companies that make and sell DNA fragments have voluntary checks in place to prevent their customers from ordering ingredients for certain pathogens unless they have a valid reason. But controlling every company in the world that produces nucleic acids is impossible, Keim says. “We’ve recognized for quite a few years that regulating this type of activity is essentially impossible,“ he says.

And if you think there’s plenty of oversight for this practice, you’d be wrong. Back in 2006, The Guardian managed to order several smallpox samples over the internet, and they were delivered, no questions asked.

Advanced Tactical Gas Mask – Are You Ready for a Biological, Nuclear or Chemical Attack?

The DNA sequence of smallpox, as well as other potentially dangerous pathogens such as poliovirus and 1918 flu are freely available in online public databases. So to build a virus from scratch, a terrorist would simply order consecutive lengths of DNA along the sequence and glue them together in the correct order. This is beyond the skills and equipment of the kitchen chemist, but could be achieved by a well-funded terrorist with access to a basic lab and PhD-level personnel…

…The DNA sample we ordered had, at our request, three small modifications to render it harmless before it was sent by post to a residential address in London. The company has since conceded that it was not aware it was sending out a sequence of modified smallpox DNA…

Is it any wonder why globalist insiders like Bill Gates are warning that bio weapons could kill hundreds of millions of people in the near future? What used to be the realm of advanced government labs and mother nature is now accessible to just about anyone, as technology makes it ridiculously easy for terrorists to create and rebuild viruses that could grind civilization to a halt. At this point it’s no longer a matter of if, but when someone decides to unleash one of these pathogens.

Insider Bill Gates Warns: Bio Weapon Could Kill Hundreds of Millions of People In The Next 15 Years

DoD Engineering Virus-Fighting Viruses For Outbreak Emergency: Will “Evolve With Lethal Viruses As They Compete With Them”

The Prepper’s Blueprint: Your Step-by-Step Guide to Prepare for Any Disaster