Welcome to the Age of Fury: “This Simmering Anger of the Populace Is Going to Start Boiling Over” 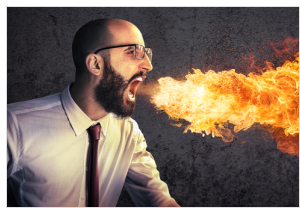 This article was originally published by Chris Martenson at PeakProsperity.com

Are You Infuriated Yet?

More and more, I’m encountering people who are simply infuriated with how our “leaders” are running (or to put it more accurately, ruining) things right now. And I share that fury.

It’s perfectly normal human response to be infuriated when an outside agent hurts you, especially if the pain seems unnecessary, illogical or random.

Imagine if your neighbor enjoyed setting off loud explosives at all hours of the day and night. Or if he had a habit of tailgating and brake-checking you every time he saw your car on the road. You’d been well within your rights to be infuriated.

Or to use a much more common example from the real world : When your politicians repeatedly pass laws that hurt you in favor of large corporations — that, too, is infuriating. Especially if those actions run directly counter to their campaign promises.

There’s a lot of be infuriated about in the world today, so go ahead and embrace your rage. By doing so, you’ll be in a better mindset to understand things like Brexit, Catalonia, and Trump, each of which is a reflection of the fury of your fellow citizens, who are finally waking up to the fact that they’ve been victims for too long.

An easy prediction to make is that this simmering anger of the populace is going to start boiling over more violently in the coming years. Welcome to the Age of Fury.

‘Over The Top’ Dumb

Do you ever get the sense that, as a society, we’re being dangerously reckless? Perhaps so dumb that we might not recover from the repercussions of our stupidity for many generations, if ever?

There are economic and financial idiocies in motion that are, by themselves, unsolvable predicaments without a peaceful solution. But when combined with resource depletion and declining net energy, they’re positively intractable.

Take for example the hundreds of trillions of dollars-worth of underfunded entitlement and pension promises. Those promises cannot be kept and they cannot be paid. Everybody with a basic comprehension of math can conclude as such.

Yet we continue to operate as if the opposite were true. We comfort ourselves that, somehow, all the promised future payouts will be made in full — even though the funds are insolvent, their returns are much lower than the actuarial projections require, and payout demand mercilessly rises each year.

Take these headlines spanning the past several years:

When it comes to broken retirement promises, the future is now. It will be with us for a very long time.

Why? Because the math simply doesn’t work. It’s broken, it’s been broken for a long time. You can’t put too little in the piggy bank at the start, then raid it over time, and still expect to have enough at the end.

And yet we, as a society, have preferred to pretend as if that weren’t the case. Which, it turns out, was a terrible “strategy.”

But if you think that’s bad, you’re going to positively hate this chart: The pension liabilities now blowing up are contained within the thin green smear in the middle of this chart. Think on the nation’s inability to handle that single crisis, and now reflect on how overwhelmed it’s going to be by the far larger predicaments that lie elsewhere on the chart.

The Infuriating Plunder-fest That Is Health Care

The Medicare liabilities (the orange and largest band on the above chart) are immense, and will only become more so as our largest demographic, the baby boomers, further ages. But they become especially infuriating when seen in the larger context of the racketeering that drives the health care system in the United States.

Instead of doing anything constructive about the high number of IOUs building up within Medicare, Washington DC politicians are sidestepping the most obvious elements that contribute the most to the problem. Enormously wasteful, the “healthcare” system is entirely out of control and spiraling deeper into an abyss that threatens to literally destroy the most productive segment of the US social structure: the middle and upper middle classes.

That should be a topic of serious discussion in the halls of power. But none is being had.

Literally each day brings worse news on the skyrocketing costs of healthcare. But, as with most topics, the media mostly focuses on the symptoms (prices) rather than the causes of the issue.

The real culprits here are the insurance cartel and a hospital system that has the most unfair, incomprehensible, and inhumane billing process ever devised. One easy to grasp feature of both the insurance companies and conspire to pay the executives far more than they actually deserve or are truly worth.

Several states have announced rates for health insurance premiums on the Obamacare exchanges for 2018. Topping the list is Georgia, with rates that are 57 percent higher than last year, while Florida said some premiums will be 45 percent higher.

Among the reasons for these increases is the uncertainty about the future of the Affordable Care Act. President Donald Trump has vowed to repeal and replace the health care law, which was passed under his predecessor President Barack Obama.

Insurers are raising premiums in the face of repeated threats from President Trump to stop funding so-called cost-sharing reductions, payments to insurers that cover out-of-pocket costs for some low-income consumers. Trump previously referred to these payments as “bailouts” for insurance companies and threatened to stop making the payments so as to “let Obamacare implode”. (Source)

That’s the story the health insurers are going with: they have to raise rates because they’re uncertain whether they will get AS MUCH LOOT under the new rules being considered as they did under the utterly disastrous Obamacare provisions.

How much loot are we talking about? Look at this chart of the stock price of United Healthcare (UNH) since the passage of the Affordable Care Act (aka Obamacare): If this chart showing massive near-4x gains in just 5 years, coupled with your steep annual premium increases, doesn’t infuriate you, you are just not getting it.

Even if your employer pays for your health care (somewhat obscuring the true impact of premium increases), the cost to you is fewer and lower pay increases, as well as steady yearly reductions in covered services along with higher co-pays and deductible amounts.

Still not infuriated? Ok, maybe this will do the trick. Here how much executive compensation at the major insurers was last year: The average family health care insurance premium in 2016 was $18,764, meaning that Mark Bertolini from Aetna alone required 100% of the premiums from more than 2,200 families just to pay him in 2016. Of course, the “C-suite” of these health care insurers are loaded with other high-paid parasites who are just as busy gouging the young and old alike.

This is a complete travesty and joke. Congress and the Senate, sitting on their deservedly low approval ratings, pretend they cannot do anything about it. Too complicated they say. Bullshit I say. Go after the obscene pay packages and profits of the insurance industry as a first matter of business. Then make it a crime for hospitals to bill people differently for the exact same services.

That’s a no-brainer. Can you imagine if your mechanic had a secret pricing formula for every customer that was, literally, based on their maximum ability to pay? Nobody would stand for it, it’s disgusting that we tolerate this when it comes to something as vital and necessary as our health and even lives.

The future has arrived. The pension losses are here and just getting started and the future will have a lot more of those sorts of broken promises.

The health care insurance crisis has been with us for 20 years or so now and Obamacare just put some extra accelerant on that fire, which is now consuming middle class households by the tens of thousands.

Both the pension and health care crises are infuriating and self-inflicted wounds. We could have avoided them by making wiser choices in the past. We didn’t. We could limit their damage by making better choices today. We almost assuredly won’t.

Current conversations and proposals are thinly disguised sleight-of-hand movements whose purpose is to deflect attention from the thefts underway. Anybody who studies the system and its math comes to the same conclusion: the corporations have all the power and they are misusing it for private gain.

Why there aren’t more politicians willing to call a spade a spade and actually protect their constituents is a real mystery. But the next wave of populist candidates certainly won’t be. People are sick and tired of being asked to give more and more while corporations and wealthy elites keep taking more and more.

But that’s not the worst of it. The mistakes we are making right now in terms of energy policy and ecological destruction are far more dangerous to your personal health, liberty and future prospects than a simple market crash.

In Part 2: It’s Time For Action, we uncover the hidden downside risks in today’s financial markets and explain how, as destructive as a coming market crash will be, the longer-term damage to society and risks to your well-being are rooted in the potential breakdown of the systems we depend on to live.

As with pensions and health care, we are pursuing similar dangerously misguided policies in our farming & food systems, extraction of industrial resources, and ecological management — to name just a few.

There’s an appropriate time for fury. And that time is now — provided we use the anger to spur us into constructive action. Get your fury on.