Watch: The Moment A Driver Shoots And Kills Gunman Who Randomly Attacked Him At Illinois Gas Station 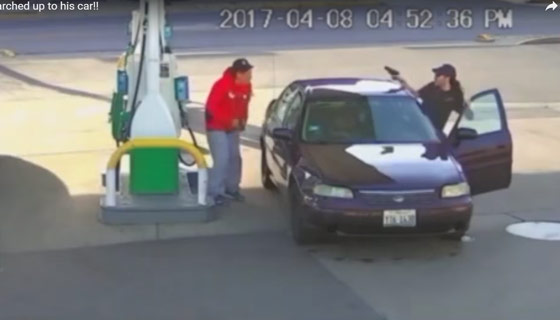 A man pumping gas in Illinois was randomly confronted by a gunman who approached his car, drew his weapon and attempted to kill him.

Police say a man dressed in the orange jacket in the video below is Ronald Morales. After apparently staring down the driver who was pumping gas, Morales hastily approached the man, gun drawn. He opened the passenger side door in what appears to be an attempt at exchanging words, but the driver had already seen Morales draw a weapon. In turn, he drew his own weapon and a shootout ensued.

Morales was shot, quickly turned and ran out of view of the camera and subsequently collapsed and died a short time later.

Police say the driver will not be charged because he acted in self defense:

The video proves once again that the Second Amendment saves lives, because determined criminals who intend to harm innocent people will absolutely get their hands on a weapon regardless of background checks or waiting periods.

Incidents such as this one play out across America on an almost daily basis.

Justified Self Defense: Mom Kills Armed Intruder with Shotgun; 9-1-1 Operator Gives Her the OK To Shoot:

“She had no time to wait for police… so she pulled the trigger.”

“Not Only Good Judgment But Also Good Marksmanship, Striking Only the Intended and Lawful Target”