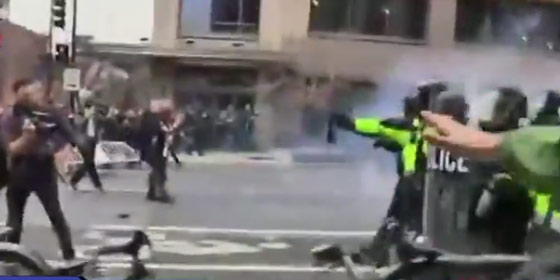 Within one hour of President Donald Trump taking the helm of the United States, protesters and police on the streets of Washington D.C. met head on.

NBC News is reporting that flash bang grenades, tear gas and pepper spray are being used, though it’s not clear who is doing what just yet. Protesters are reportedly blocking entrances, setting fires and vandalizing building structures throughout the area.

Earlier this week we reported that radical leftist groups planned on using chemical weapons to disturb the inauguration. As well, paid provocateurs are likely among average protesters, as evidenced by an earlier report indicating that leftist groups had posted advertisements seeking individuals to prevent a peaceful transition of power.

Watch video from the streets of DC, where at least 95 people have already been arrested and several police officers have been injured:

We expect the situation to devolve into further chaos as the day progresses.