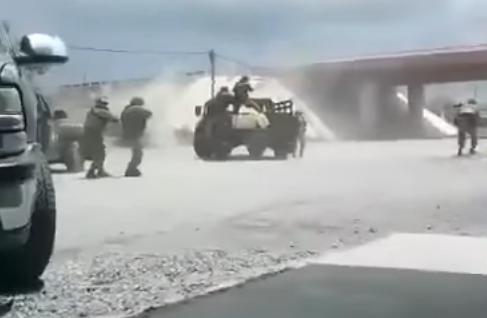 Whenever a debate rages over the merits of establishing more stringent border controls with Mexico, both sides argue about whether or not illegal immigrants hurt the economy, or if these people are burdening our public services. They argue about whether or not the flow drugs from the southern border is corrupting our youth, or more importantly, if we need to worry about cartel violence spilling over our borders.

But these issues are referred to in abstract terms. When people argue about Trump’s border wall plan, they hurl their favorite statistics at each other and call it a day. What they really need to experience, is not an argument. They need to see the violence in Mexico with their own eyes.

They need to see things like the following video. This was shot last week in the state of Tamaulipas, which borders Texas. It shows a firefight between the Gulf Cartel and a Mexican military unit.

When people talk about the cartel violence in Mexico, it’s easy to compare it to the gang violence that we have here. That’s because when you talk about it in abstract terms, all we can imagine are drive-by’s, intimidation, and street brawls. But what’s going on in Mexico is totally different. It’s open warfare in the streets, just a few miles from our border, and if it had happened in the United States then we’d be talking about it for months.

Remember that the next time you hear someone say that we don’t need a border wall.