Watch: Greeks Fight For Food: “I Never Imagined That I Would End Up Here” 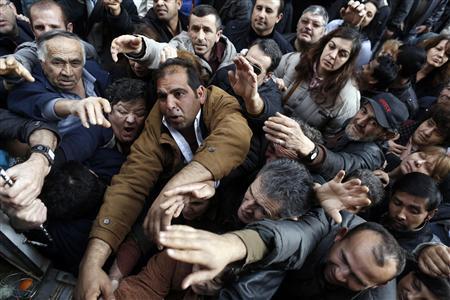 (Pictured: February 6, 2013: Greeks reach out to take fruits and vegetables distributed for free by farmers. Over 100,000 pounds of food was not enough to feed everyone.)

Once a bastion of European success and center of tourism, the country of Greece has become the harbinger of things to come for the rest of the world’s developed nations.

Today, just a short time after a financial collapse that rocked global financial markets, Europe’s darling has turned into a frightening example of what happens when governments and their people take on more debt than they can ever hope to repay.

The end result is a warning to the rest of us.

Hundreds of people jostled for free vegetables handed out by farmers in a symbolic protest earlier on Wednesday, trampling one man and prompting an outcry over the growing desperation created by economic crisis.

Images of people struggling to seize bags of tomatoes and leeks thrown from a truck dominated television, triggering a bout of soul-searching over the new depths of poverty in the debt-laden country.

“These images make me angry. Angry for a proud people who have no food to eat, who can’t afford to keep warm, who can’t make ends meet,” said Kostas Barkas, a lawmaker from the leftist Syriza party.

Other lawmakers from across the political spectrum decried the images “of people on the brink of despair” and the sense of “sadness for a proud people who have ended up like this“.

People have seen their living standards crumble as the country faces its sixth year of recession that has driven unemployment to record highs.

The free food handout in Athens began peacefully as hundreds of Greeks lined up in advance outside the agriculture ministry, where protesting farmers laid out tables piled high with produce, giving away 50 metric tonnes (55.11 tons) of produce in under two hours.

Tensions flared when the stalls ran out of produce and dozens of people – some carrying small children – rushed to a truck and shoved each other out of the way in the competition for what was left.

One man was treated for injuries after being trampled when he fell to the ground in the commotion.

“I never imagined that I would end up here,” said Panagiota Petropoulos, 65, who struggles to get by on her 530-euro monthly pension while paying 300 euros in rent.

“I can’t afford anything, not even at the fruit market. Everything is expensive, prices of everything are going up while our income is going down and there are no jobs.”

Desperation, sadness, poverty, disbelief – these are the horrors that await the unprepared.

While European (and U.S.) officials would have us believe they’ve mitigated the crisis in Greece, the fact is that this experiment in centralized governance is, in its entirety, on the brink of collapse.

We’ve chronicled the desperate situation in Greece for the last few years.

Personal accounts from some of our readers express their fear and uncertainty as political and socioeconomic conditions have deteriorated.

Shortages of life savings medicines and food have led to widespread riots and looting. Food has become so expensive in Greece that it has become unattainable for many, prompting the Greek government to authorize grocery retailers to sell expired food at discounted prices.

On a national level, Greece’s manipulation of economic health numbers and their ability to repay loans has left them unable to meet their financial obligations and has led to talks of their exit from the Euro, a move that has the potential to destroy the European currency system altogether.

The debts have gotten so high that the country faced the possibility of a complete collapse of their power and gas infrastructure when local utility companies were unable to settle their agreements with regional suppliers – an effect caused by their customers’ inability to pay their monthly bills.

This is what it looks like when a system collapses. Sometimes it happens overnight in a waterfall event. In the case of Greece, a country that has the backing of the world’s two largest central banks, it’s been a slow but steady process of grinding down all aspects of life.

A similar grinding down should be apparent in other Western nations, namely the United States, where we’ve seen employment decline unabated over the last decade and tens of millions of people added to government funded social safety nets like food assistance and disability.

Make no mistake. We are Greece.

Now is the time to prepare for the desperate situation that will soon be in America. For millions it’s already here.

Every day we edge closer to disaster. Life in America as we have come to know it is in the midst of a massive paradigm shift.

It will no doubt be difficult. But despite the challenges, with the proper mindset and preparation, perhaps we can avoid being one of the many who will be depending on handouts when the worst comes to pass.