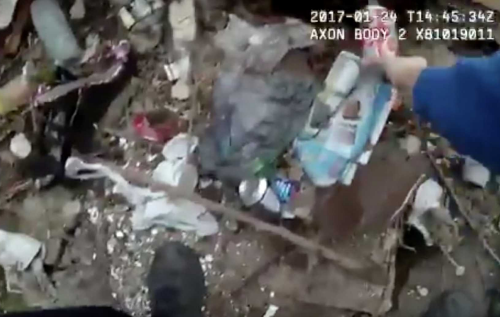 Few things in life are more terrifying than an encounter with a police. Fortunately, most encounters prove to be uneventful, and leave us with nothing more than a speeding ticket and a sour mood. But nonetheless, being stopped and questioned by a cop under any circumstance can be nerve-wracking, because the police have a lot of power over us. All it takes is one encounter with a really bad cop, and your life can be ruined.

That fact should be abundantly clear after a police officer in Baltimore was recently caught planting drugs at the scene of a crime, which led to an unnamed suspect being wrongfully imprisoned for months (he has since been released). Strangely enough, what exposed the officer’s crime was his own body camera.

Footage shows officer placing drugs in trash; goes out to street, turns on camera, returns. Cams save 30 sec prior to activation, w/o sound pic.twitter.com/5ZW128lWFM

In the beginning of the footage you can see him dropping what looks like a bag of pills on the scene, before he walked down an alleyway with two other officers. After the audio turns on, he can be heard saying “I’m going to go check down here, hold on,” as the other officers laugh. He then returns to the scene, and grabs the can that he just put the drugs inside of moments before.

It has to make you wonder, how often did this sort of thing happen before body cameras were invented? How many totally innocent people are in jail right now because of cops like this?