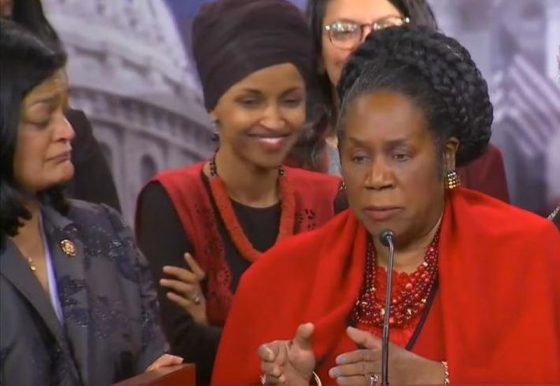 “I’m very glad to say that I was part of the 132 and also the vote for Barbara Lee’s amendment, but I think that the point of that is that that is the same war that we’re dealing with today,” said Lee. “We never solved any problems with AUMF, we left four thousand plus, maybe even forty-four hundred dead, and over sixty thousand who came back injured in some form and the war never ended.”

As Lee spoke, Omar and her progressive pals continued to trade jokes, smiles, and laughs.

“I recall the language in AUMF, it deals with hostilities in Iraq,” Lee continued, according to the Daily Wire. “It doesn’t deal with an incident or a dislike or someone in a car coming in from the airport. That is the danger of not acting and I do think with our leadership, meaning the leadership CPC, that will come together around specific answers.”

.@ConorLambPA, I’m calling on you to condemn your colleague’s behavior here & defend our men & women in uniform who fought & bled for our nation.
I know you vote with her 90% of the time, but this is beyond politics.
As a US Marine, this should horrify & disgust you. https://t.co/UVkGvrqSF6

Later, the bemused Omar took to the microphone, where she said that the possibility of war with Iran had caused her to be “stricken with PTSD.”

“I feel ill a little bit because of everything that is taking place and I think every time I hear of conversations around war I find myself being stricken with PTSD,” she said, before attacking President Trump over the imposition of additional sanctions against Iran following an attack on airbases housing US forces.

.@IlhanMN says she has PTSD and the talk of conflict w/ Iran is making her uneasy pic.twitter.com/jzjUfKjEUY

Two days earlier, Omar suggested that Iran could “threaten Trump hotels *worldwide* and he could provoke war over the loss of revenue from skittish guests,” adding that “His business interests should not be driving military decisions.”

Trump needs to immediately divest from his businesses and comply with the emoluments clause. Iran could threaten Trump hotels *worldwide* and he could provoke war over the loss of revenue from skittish guests.

His business interests should not be driving military decisions.

Meanwhile, as PJ Media notes, Omar has expressed more outrage over the killing of Iranian #2 Qasem Soleimani than she did over 9/11.