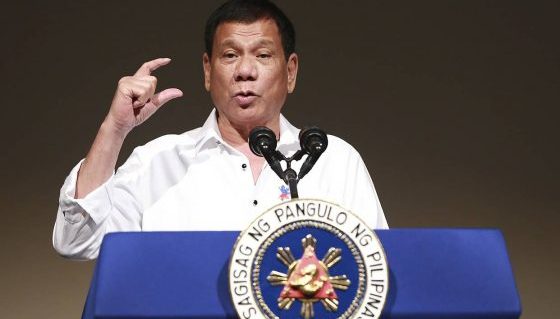 Rodrigo Duterte’s drug war has just been given a violent and deadly shove into overdrive. Local volunteers are now going door-to-door and marking homes of suspected drug dealers with red X’s.

The tyrannical leader of the Philippines has already slaughtered 10,000 people in his quest to crack down on drugs. Local administrative districts were given the orders to collect the data this spring and to provide lists of suspected drug offenders to the Philippine National Police. But these records are spreading new fear throughout poor communities already plagued by vigilantes and extrajudicial police killings in President Rodrigo Duterte’s bloody war on drugs.

VICE News followed along as community volunteers in Payatas, on the outskirts of Metro Manila, spent their Sunday morning rounding up neighbors on the watch list to deliver them to local authorities. There’s been no word on whether the lists are accurate or not. Yet fears that this could lead to vengeful people simply adding their neighbors they dislike in an attempt to “get rid of them” have surfaced.

On Wednesday, lawyers in the Philippines filed an injunction with the Supreme Court to try to stop President Rodrigo Duterte’s bloody war on drugs. The injunction called the drug war an illegal campaign that lets police kill indiscriminately and circumvent legal procedures. The government’s directive for the fierce 15-month-old crackdown permits police to “negate” and “neutralize” targets, effectively granting them a license to kill suspected users and dealers, without gathering evidence or building a case, the lawyers said.

A practice of compiling lists of “drug personalities” and encouraging citizens to anonymously provide names was tantamount to drawing up a hit list, the petition said. It called for judicial intervention in thousands of cases where Filipinos were killed by police.

“The present war on drugs being waged by the government is not going to stop illegal drugs, crime and corruption,” Jose Manuel Diokno, chairman of the Free Legal Assistance Group (FLAG), told a news conference.

“(It) will only result in the killing of more and more people especially the poor.” -Business Insider

The latest petition seeks to compel the Philippine National Police and the interior ministry to halt the campaign and wants killings to be examined by the National Bureau of Investigation (NBI), which would take charge of evidence, including guns that police say were used by victims.

It said house-to-house visits by anti-drugs police are often “unverified tip-offs from unknown informants” and were not ever based on any actual evidence. It also argues that police had no intent to persuade suspects to surrender and would kill anyone who refused to cooperate or denied involvement.

“The government’s war on drugs is short-cutting the justice system by dispensing justice from the barrels of guns,” the petition said.