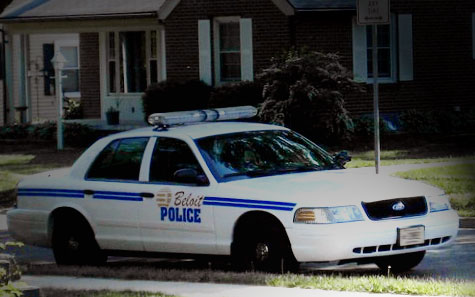 UPDATE: Due to public outrage, the police department in this story was force to cancel their home inspection program, for the time being. See below.

The tyranny around us is all an illusion. Everything you see is for your safety.

Repeat: It’s all for your safety.

So are the new, unwarranted police home searches for weapons… in fact, they are just voluntary. Explicit consent instead of implied consent. Even pretend.

While we’re at it, there’s a dress rehearsal for martial law going on in Los Angeles with Marines in full combat gear, just after real martial law in Ferguson during months of protests and riots.

Until today, police in Beloit, Wisconson, a city with about 37,000 people, were asking residents to open their doors to “voluntary” home inspections so police can look for illegal guns… and whatever else they might find:

As part of its new “Consent to Inspect” program, authorities in Beloit, Wisconsin, want residents to open their doors so they can come and inspect for illegal guns without a warrant.

The effort is part of a new push to help get firearms off the streets in an area that has suffered an uptick in homicides this year. Beloit Police Chief Norm Jacobs feels that gun violence is a disease and his new program, which asks local residents to allow officers to come by and search for firearms and even modified toy guns, is a step to a cure.

It stands to reason that a voluntary search for illegal guns (which ones are they?) might well include police tracing, databasing and verifying serial numbers, owners and/or purchase histories as well. Oh, and of course, investigation of any other contraband or regulated items of interest, etc. Slippery slope.

But it is all just friendly fun and games.

The local news piece made it seem like a favor for a good neighbor:

Amazingly, Police Chief Jacobs tried to convince people his officers would be looking for weapons the residents themselves didn’t know where there! As Wisconsin Public Radio reported:

Jacobs said he hopes some searches will result in the discovery of guns they didn’t know were in their own homes. He said that there’s also a chance they’ll find guns linked to crimes.

After the news of this program drew heavy fire from critics and rights advocates, Jacobs decided to cancel it:

“The Beloit Police Department is withdrawing its offer, made this past week, to inspect homes for illegal weapons. The initiative was suggested by Chief Norm Jacobs as a way of helping the community deal with gun related violence, which has resulted in over 51 shots fired and six of eight homicides that occurred in the City so far in 2014.

While the program was strictly voluntary and required a signed release before police could enter a residence, numerous individuals have expressed concerns about the fact that people’s homes would be inspected or searched as part of the process. At this time, the department is withdrawing it’s offer under this initiative, and will be submitting the program to the City’s legal office for further review.”

And good thing this ridiculous program was canceled before it got started, as it is all the more ridiculous once you find out what ELSE police would be looking for:

“That’s really what we’re looking for,” he said. “Maybe we’ll find a toy gun that’s been altered by a youngster in the house — and we know the tragedies that can occur there on occasion.”

So “altered” toy guns are a big “problem” for police, huh? Dangerous, even.

A cursory search finds the most relevant case of an altered toy gun creating a tragedy is the recent case in Cleveland, which TIME magazine spun into its headline: Toy Guns Create Deadly Problems for Police. Actually, the deadly part of the problem was for the 12 year-old boy who, while perhaps acting recklessly, was only carrying a toy gun. Despite being warned explicitly in the 9-1-1 call that the gun was “probably fake,” police arrived on scene and killed him unhesitatingly within seconds (as video shows), without any attempt at mediating a surrender.

Yes, toy guns are a big problem – because they trigger a dangerous response.

That’s why kids have been arrested and expelled from schools all over the country for playing with, drawing or even imagining fake, toy guns or gun-shaped pop tarts.

One California school even held a gun buyback program for toy guns. Why the emphasis on toy guns? Is it conditioning young children to lose their 2nd Amendment rights? Sure, but there’s another reason.

The Denver Public School system actually acknowledged that over-response by police was the real reason that toy guns were such a problem, after it arrested a group of boys who brought BB guns to school. Denver school “safety officials” told Fox 31:

“Bringing anything to school that looks like a real weapon can create a dangerous situation for our students… as police and security could perceive a serious threat and respond by using their own weapons.“

In other words, police have been trained to shoot children if they are carrying guns, real, fake or imaginary.

Remember, some members of law enforcement have actually been training with targets of children, pregnant women and the elderly.

Increasingly, and sadly, many law enforcement officials are literally trained to see members of society as a threat… even in their own homes, when carrying toy guns, and etc… and there’s absolutely no room for common sense.

In fact, common sense has nothing to do with it.

“They that can give up essential liberty to obtain a little temporary safety deserve neither liberty nor safety.” – Benjamin Franklin