Video: Violent Muslim Extremists With Bats And Weapons Attempt To Attack This French Guy… But He Has A Deadly Concealed Surprise Waiting 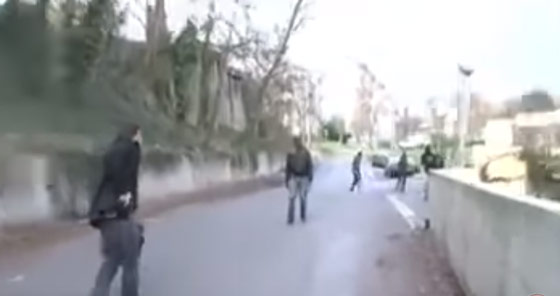 Editor’s Note: It’s been reported that the following video was recorded in 2015. The man man with he firearm has been identified as a French police officer. Nonetheless, we believe it is as relevant to current events today as it was then, as residents of numerous European cities report increases in violence against non-Muslims in areas known as ‘no go zones’.

With tensions rising across the globe, especially in France and Britain, residents have started to realize that they can no longer depend on their local police or governments to protect them.

As demonstrated in the video below, several French-speaking individuals were gathered together when a band of what is reportedly Muslim refugees and/or residents of the area began shouting threats at them. From the video, it appears that the first group of people are unarmed and simply trying to get away. But the bat-wielding, hoodie covered assailants would have none of it.

Several of them made their way towards one of the men with weapons in hand, at which point he revealed a concealed surprise none of them saw coming.

Apparently, even in socialist, hyper-tolerant, anti-gun France, there are still some wise individuals who have realized the reality of today’s world: