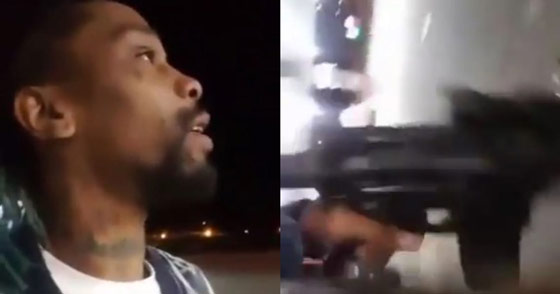 Shocking video has emerged of a thug pulling an assault rifle on a Trump supporter because he had a “Make America Great Again” flag attached to his truck.

The video was originally uploaded by someone called ‘Neal YsdalHothead Norles’ on Facebook but the clip has now been removed.

“Hey boy you voted for Trump?” shouts the thug.

“Yes, I did vote for Trump,” responds the man.

The thug then gets offended at the man for saying “shit,” before the Trump supporter says, “If you try to touch my shit you gon’ see what happens!”

The thug appears to walk towards the truck and begin removing the flag. The video abruptly stops and it is not known how the confrontation ended.

While leftists have staged numerous fake hate crime hoaxes that were blamed on Trump supporters, the innumerable violent physical assaults on Trump voters continue to be ignored by the mainstream media.