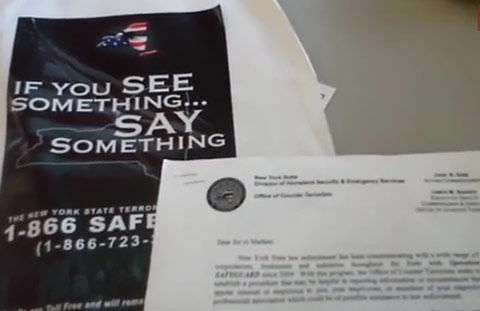 In 2011 Rand Paul stood on the floor of Congress and delivered a stark warning to Americans. To criticisms of sensationalism and embellishment, Paul noted that Federal laws on the books characterize those who have guns, seven days worth of food or ammunition in their homes as potential terrorists.

Know good and well that some day there could be a government in power that is shipping its citizens off for disagreements… Someone who has guns, someone who has ammunition that is weatherproofed, someone who has more than seven days of food in their house can be considered a potential terrorist.

If you are suspected by these activities do you want the government to have the ability to send you to Guantanamo Bay for indefinite detention?

It was a shocking statement and one that was dismissed as the rantings of another right-wing extremist who just so happened to be a Senator.

But footage posted by Washington Weekly News shows that not only was Rand Paul’s assessment accurate, it only brushed the surface of what domestic intelligence agencies consider suspicious or terroristic activity.  According to the report, a WWN journalist with camera in hand visited local businesses to acquire video evidence of various government signage. What he found was shocking:

New York’s Division of Homeland Security is posting signs on businesses to encourage people to snitch on fellow citizens who buy such things as MRE’s (Meals Ready to Eat), ammunition, flash lights, match containers, gas masks and other items deemed to be ‘prepper’ in nature.

Surplus store in Auburn, NY tell us how a state trooper put up a flyer in their window which encourages customers to call the New York State Terrorism Tips Line to report this ‘suspicious activity’ under the as part of the “See Something, Say Something” campaign.

The sign in question, as well as the accompanying letter to the local business, can be seen in the video below.

New York State law enforcement has been communicating with communicating with a widerange of corporations, businesses and industries throughout the state… With this program the Office of Counterterrorism seeks to establish a procedure that may be helpful in reporting information and circumstances that appear unusual or suspicious to you, your employees or members of your respective professional association…

As noted by Washington Weekly News, all of these items are legal to purchase, yet citizens who see you doing so are urged to report your activities to law enforcement officials or the Department of Homeland Security.

What’s curious is that the very government telling people to spy on their fellow countrymen has itself been engaging in these same activities through the acquisition of massive amounts of Meals-Ready-To-Eat, guns, billions of rounds of ammunition, gas masks, riot gear, and a host of other supplies being regionalized at DHS centers across the country.

Moreover, they have been actively preparing for widespread economic collapse and civil unrest scenarios, including the Jade Helm 15 exercises that are reportedly designed to “Master the Human Domain,” an operation that involves training military personnel for the rounding up of subversives and dissidents.

In fact, according to one Texas Ranger, the Federal government already has trains on standby, complete with shackles, ready to detain and transport prisoners.

The connection is clear – the government is asking citizens to rat each other out so that they can be marked on terror watchlists, and should a national emergency ever be declared, individuals and their families could be rounded up under Doomsday Executive Orders.

And if people like General Wesley Clark have their way, they’ll be held indefinitely in internment camps or worse.

They, as in operational managers at the highest level of government, know what is coming. They have spent trillions of dollars on everything from deep underground bunkers to the stockpiles that are being hidden away in them.

These facts cannot be disputed.

This implies that a catastrophic event of some sort is believed by the government’s emergency planning apparatus to be imminent.

Thus, despite the continued marginalization of those who are sounding the alarm bells, we maintain that Americans need to be preparing for a worst case scenario that could potentially disrupt our power grids, our systems of commerce, and essentially bring life in America the way we have come to know it to a destructive end.

Prepare now – and prepare for a variety of potential disasters – because whatever it is that they are planning for could be extremely serious and long-term.