Video: Model Shows How Ebola Will Spread: “It Only Takes One Infected Individual Making It Through An Airport Checkpoint” 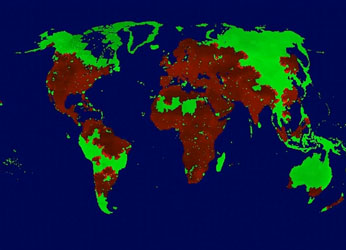 Health officials around the world are scrambling to contain the Ebola virus with many, including the Centers for Disease Control and the World Health Organization, now preparing for its eventual escape out of West Africa.

According to CDC director Tom Frieden, the ‘window of opportunity’ for stopping the spread of Ebola is closing rapidly. In July, as the virus surged across west African borders, Frieden downplayed its potential to reach U.S. shores. “It is not a potential of Ebola spreading widely in the U.S.,” claimed Frieden in a preemptive effort to prevent panic. “That is not in the cards.”

In the United States, hospitals are quietly preparing Ebola infection wards and procedures for what many believe is the inevitable arrival of the virus on U.S. shores.

Mathematical models performed by numerous researchers suggest that anywhere from 20,000 to 100,000 people globally could contract the virus by December of this year.

Researcher Yaneer Bar-Yam, whose models predicted the rise of the Arab Spring just weeks before it actually happened, has been modeling viral outbreaks since 2006. In a report published in conjunction with MIT and the New England Complex Systems Institute, Bar-Yam and colleagues developed a host-pathogen model to predict the spread of emergent diseases, including Ebola, in evolving ecosystems.

The results are nothing short of terrifying as depicted in the video produced by the NECSI showing how the Ebola virus originating in West Africa might spread:

The most relevant features of NECSI’s model to the current crisis is the critical threshold of connectedness at which a virulent strain can spread out of control.

Even if a system seems stable, it may only take a few more routes of travel to trigger secondary outbreaks.

“It wouldn’t take much for the current Ebola outbreak to spread to more countries or continents,” says NECSI president Yaneer Bar-Yam. “It only takes one infected individual making it through an airport checkpoint.”

When it comes to pandemics, it only takes a little global connectedness to trigger a cascade of infections. The outbreak of Ebola raging in West Africa— labeled a Public Health Emergency of International Concern by the World Health Organization—echoes a scenario mapped out by NECSI in 2006.

In a computer simulation of pathogens and hosts, long-range routes of transmission — most prominently, international air routes — can allow the deadliest viral strains to outrun their own extinction, and in the process kill vastly more victims than they would have otherwise.

In an evolutionary model accounting for spatial distribution, a pathogen like the Ebola virus can cause its own demise by killing all the hosts in its immediate vicinity. If there is no one left alive to infect, a viral strain will die off. Successful pathogens leave their hosts alive long enough to spread infection. Typically, the most virulent mutations burn themselves out, and a stable balance is achieved between host and pathogen. But avenues of long-range dispersal break this pattern.

This particular outbreak of the Ebola virus has been underestimated by health officials and government leaders since the very beginning. They assumed, wrongly, that it would behave like previous outbreaks. But rather than remaining contained in a specific rural area, wiping out its hosts, and dying off like previous outbreaks did, the virus has continued to spread. The likely cause is that travel systems are much more advanced today than they have been in the last several decades, and as noted by Bar-Yam, it only takes a single individual with Ebola to cross a checkpoint.

In fact, this is exactly what happened in Lagos, Nigeria. One person reportedly entered the country via a flight to Lagos, slipped through Customs with the virus, and now at least 19 individuals have been infected and another 400 are under surveillance.

It should be clear that unless global transportation systems and international border crossings are completely shut down, a move that is unlikely, the virus will keep spreading.

This week an official from the U.S. National Institutes of Health told Newsweek that the virus continues to accelerate and is now “completely out of control.”

The Threat Is Real

Though we have warned about the potential havoc Ebola would wreak since it was first identified, many have failed to take it seriously.

Now, with nearly 2,000 people dead and potentially thousands of others infected, we are reaching a point of no return.

It’s not clear how officials plan on isolating a virus that has spread to at least six West African countries and could now have made its way to other regions like Europe, Asia, Central America or even the United States.

As highlighted by Yaneer Bar-Yam and his colleagues, since there is no cure the only preventative measure is isolating oneself from populations that could potentially carry the virus – and in this case, that means every one.

There is no cure for the Ebola virus; only early detection and basic medical care can improve a patient’s chance of survival. Thus, awareness of how quickly the scales of transmission can tip is paramount to getting the current outbreak under control and preventing more from starting.

Containment efforts around the world have thus far failed, so we must assume a worse-case scenario in which the virus makes its way to our regions, cities, and neighborhoods.

What You Can Do To Prepare

Among her instructions for creating a sick room, Pennington recommends a basic supply list.

But she also notes that a pandemic event will likely lead to significant shutdowns for businesses, government offices, potentially even your doctor’s office, so preparing for that is also an important consideration. And that includes having emergency food, water and other supplies on hand, because the last thing you want to do is have to leave home when those in your town or neighborhood could be carriers of a deadly disease.

Whether Ebola hits U.S. shores remains to be seen. But as of right now nearly 2,000 people worldwide are dead, the virus is spreading, and it has a mortality rate of 50% to 90%.

Government officials seem to be unable to contain it. This means that prevention comes down to each individual and their families.

Do you really want to wait until after infections have been identified in the United States to make your preparations?