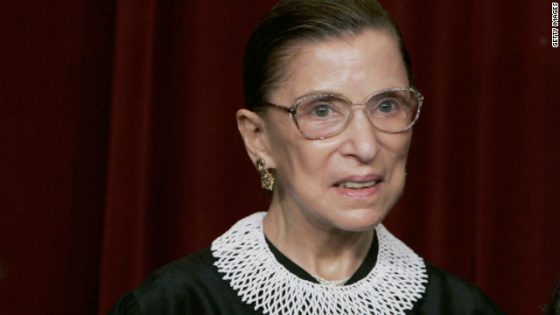 In this flashback video which takes us back to 2012, current supreme court justice Ruth Bader Ginsberg trashes the United States Constitution: the very document that gave her a job and the “right” to “rule.”  She’s talking about what the Egyptian people should expect when setting up a new government.

As the Trump administration prepares to nominate a new justice to the U.S. Supreme Court, liberals are probably wishing for nothing more than someone in the mold of Ruth Bader Ginsburg, writes The Conservative Tribune. Ginsburg was appointed by Bill Clinton and took her oath to uphold the US Constitution (she says is outdated) on August 10, 1993.

“I would not look to the U.S. Constitution if I were drafting a constitution in the year 2012. I might look at the constitution of South Africa. That was a deliberate attempt to have a fundamental instrument of government that embraced basic human rights, had an independent judiciary,” Ginsberg says.

Ginsberg ironically says she’s “operating under a very old Constitution,” yet she’s making decisions about laws and rules as an 85-year-old. As if the age of a document or a person is somehow important when it comes to what rights other humans outside of government have or what laws they should be subjected to based on opinions.

In remarks she made during a 2012 visit to Cairo University in Egypt, which had just undergone major changes from the Arab Spring revolution and the overthrow of Hosni Mubarak, Ginsburg did offer praise for the U.S. Constitution, but thought that the Egyptians should look elsewhere when they draft a new document instituting a ruling class that will lord over others, according to Fox News.

“It is a very inspiring time – that you have overthrown a dictator, and that you are striving to achieve a genuine democracy. So I think people in the United States are hoping that this transition will work and that there will genuinely be a government of, by, and for the people,” she said, according to the Middle East Media Research Institute.