VIDEO: Cop Suffers A Panic Attack During Standoff As Paramedic Disarms Him 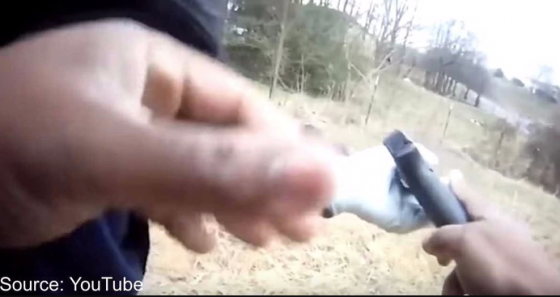 A Sevier County Sheriff’s Office deputy opened fire without warning in a mobile home park. He then suffered an apparent panic attack and four minutes later was forcibly disarmed by a paramedic, body camera footage shows.

Deputy Justin Johnson and paramedic Blake Gregg were holding down an unarmed suspect, Tina Carrie Jo Cody, when the incident occurred. The video begins with Johnson asking Cody to walk toward him with her hands up. He already seems angry and slightly agitated.

Johnson was called to the mobile home park at 794 Sharp Road by the paramedics. A “morbidly obese female” had fallen inside one of the homes and was complaining about landlord Robin Sutton, Cody’s mother, and Cody, Johnson wrote in his report.

Once Cody is on the ground after a short chase,  an obviously adrenalized Johnson suddenly turned toward the trailer park and fired four shots. He paused and fired three more rounds, the video obtained by the USA TODAY NETWORK – Tennessee showed. Johnson then ran away from Cody and Gregg toward Sharp Road.

“Shots fired,” he told dispatchers. “We need help.” Four minutes later, Johnson was kneeling over Cody, who had remained on the ground during the shooting, with his gun still in his hand when the video showed he began hyperventilating and running backward away from the mobile homes and Cody.

“Pull it together,” O’Connor told Johnson. “Look at me.”

The paramedic does succeed in disarming Johnson. About one minute and 30 seconds after Johnson began hyperventilating, his breathing slowed. “I’m OK,” he said. “I’m OK.”

O’Connor handed Johnson his gun back. He had hyperventilated so strongly one of his contact lenses had popped out of his eye, the video showed. He tossed it away as he trained his gun toward the mobile homes. The man he has been yelling at was Brian Keith Mullinax, the boyfriend of Tina Carrie Jo Cody. The couple spent 42 days in jail on felony charges, accused of causing what was described in court statements as a “panic attack” and which a detective called “some type of cardiac event.” They remain under prosecution on misdemeanor charges, court records show.

Mullinax is set to stand trial in Sevier County Criminal Court on a charge that he assaulted Johnson. A lower court judge already dropped felony charges against both Cody and Mullinax, and a grand jury refused to indict Cody for causing the panic attack. She remains charged with resisting arrest.