Venture Capitalist Says Investors Are Terrified Of Market Volatility And Weak Economy: “They Are Scared And Don’t Know What To Do” 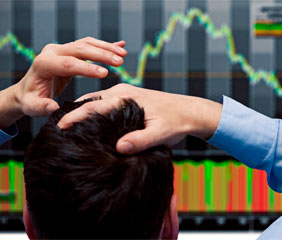 With stocks having rebounded following a major down-swing earlier this year, it’s all smooth sailing going forward if you believe the mainstream financial pundits and renowned economists who continue to encourage the general public about the unfettered strength and stability of the U.S. economy. But according to well known venture capitalist and resource sector investor Carlo Civelli, last week’s Fed action, or rather, inaction, suggests that exactly the opposite is the case.

It goes to show that the economy is not as strong… or the markets were too volatile even for Yellen to stomach.

In his latest interview with Crush The Street Civelli explains why the stock market is the only game in town for many investors, why people are being forced into negative yield investments, how stabilizing stocks markets doesn’t necessarily translate to a healthy economy, and where to position yourself today to avoid the wealth destruction to come:

It was just a few months ago when the Federal Reserve was so proud of their work that they took to raising interest rates and announcing that no more monetary action would be necessary. And, though most of the investment world would like to believe that the best and brightest central bankers on the planet have everything under control, it turns out, as Civelli notes, those who are manipulating the global economy, financial markets and monetary policy actually have no clue as to the consequences of their actions:

Nobody, not even the central banks, knows how this is going to end. They keep on pumping money…

Volatility in financial markets has left an air of uncertainty across the globe. So much so, says Civelli, that many of the investors he talks to on a regular basis are just as concerned about the unknown as the Fed, with many either sitting in large cash positions, making risky stock market bets in an effort to generate some yield on their investments, or willing to pay governments to keep their money “safe”:

The central bank of Switzerland, for example, has a negative interest rate of 0.75%, so you’re paying the bank 75 basis points to keep your money there… and therefore people even go to the extreme of buying a Swiss government bond with a negative yield of, say 35 points, which makes them still up 40 points… it’s getting ridiculous.

What else do we do with the cash? Everybody I talk to holds unprecedented cash positions, is scared and doesn’t know what to do…

So the only way out right now is to play the stock market.

And then, as we can see in January and February.. if something that was not in the cards happens, the markets go wild.

The unpredictability of central bank and government action has left many anxious and confused.

But despite the challenges being faced by most investors, there are still opportunities available. Civelli, who is focused on acquiring assets while they’re cheap through his latest project Callinex Mines, remains positive that precious metals will weather the storm of unprecedented monetary intervention from central banks and the consequences that will follow:

The consensus, obviously in a situation like this, would be that gold has to go up.