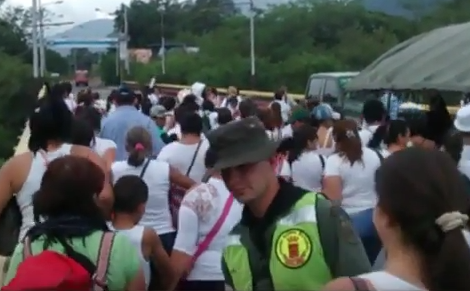 Venezuela is reaching the point of total desperation.

Women are now pouring over the Colombian border in effort to get their hands on groceries, trading on the black market and doing anything to survive.

That suggests other means of coping in the economically besieged capital of Caracas are wearing thin, and the difficulties of managing ordinary life under food shortages and long ration lines are forcing people to turn to alternative means of combating hunger.

According to the Miami Herald:

Dozens of Venezuelan women broke through a barricade along the Venezuelan-Colombian border on Tuesday with one goal in mind: finding food.

Local media in the Colombian border town of Cúcuta, estimated that more than 100 people — mostly women — defied Venezuela’s border patrol and swarmed the frontier to do their shopping.

Inflation and falling oil prices have led to dramatic food shortages in Venezuela, and the border state of Táchira has been particularly hard-hit. In recent weeks, there have been widespread reports of looting and food riots.

“We decided to cross the border because there’s no food in our homes and our children are hungry,” one unnamed woman told Cúcuta’s La Opinion newspaper.

Venezuela unilaterally shut down its 1,274-mile border with Colombia beginning in August of last year, saying that its subsidized goods were being smuggled out.

The women were defiant and easily overwhelmed the border agents in an act of bold desperation that created quite a scene on video:

This has become a full blown humanitarian crisis.

The ongoing struggle between socialist President Maduro and the U.S.-friendly opposition are dragging society down with it into the lowest places, to the disgrace of their tactics.

Starving the people of Venezuela will prove – apparently – how much power can be taken away from a despotic regime floating on the price of oil.

The meltdown draws from the circumstances of textbook despotism under crumbling power, but the very real struggle that millions of people face there just for enough food to eat is a true injustice. They have been brought to their knees, and should be supported in escape their political situation as soon as possible.

With a shortage of food, many have already turned to looting, violence and theft, while others recoil under the horrors of bureaucratic hell waiting in long lines for food that may or may not be there.

Until very recently, Venezuela was a civilized place, and that’s how quickly things can come unglued.