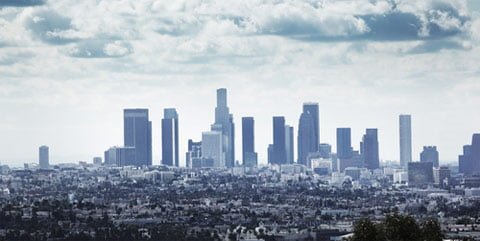 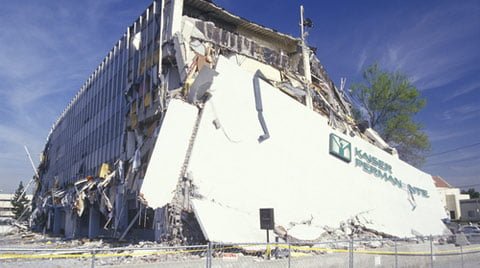 (Pictured: This iconic image from the 1994 Los Angeles quake shows the concrete Kaiser Permanente building that sat near the epicenter of the 6.7 quake)

Tens of millions of Americans depend on the stable functioning of infrastructure systems like transportation, utility services, food delivery and communications. Without them modern society comes to a standstill. The U.S. government, under the direction of the Federal Emergency Management Agency (FEMA) and local emergency teams, has spent billions of dollars to ensure operability of these essential societal nodes in the event of an emergency, but for some parts of the country, it may not be enough. A report from the US Geological Survey (USGS), a research arm of the federal government, indicates that the West Coast of the United States, namely those areas directly on or in the vicinity of fault lines, is not equipped to deal with a wide scale emergency that would directly impact these infrastructure systems.

The threat is a high-magnitude earthquake, something most Americans living in these areas assume will not have a significant impact on their lives because of building codes and existing disaster response plans implemented by government emergency planners. Many residents of these areas have become complacent because previous earthquakes, while damaging, didn’t adversely affect their day-to-day lives.

The earthquakes that struck San Francisco in 1989 and Los Angeles in 1994 measured 6.9 and 6.7 on the Richter scale respectively. Hundreds of buildings in both cities collapsed in their aftermath, with nearly ten times as many being “red flagged” as uninhabitable. Neither of these quakes were strong enough to affect the underlying infrastructure on a widespread scale. Life continued on as if nothing had happened following the initial destruction. According to the USGS, there have been over 120 earthquakes measuring in this range – between 6.0 and 6.9 on the Richter scale – in 2013, so they’re not uncommon.

But these aren’t the quakes scientists are concerned about with respect to damage levels. It’s the “mega-quakes,” which measure around 7.5 or higher that pose the biggest threat to populated areas on the West Coast. Though they don’t happen very often, this year the USGS has measured six such earthquakes around the world, so it’s not out of the question to suggest that a seismic event of this magnitude could potentially occur in Los Angeles or any major West Coast city at any time.

USGS researcher Dr. Lucy Jones, who spoke to 20,000 geoscientists from around the globe at this year’s American Geophysical Union meeting in San Francisco, simulated the effects of a 7.8 quake originating just south of Los Angeles along the San Andreas fault line. The results were shocking. According to Dr. Jones, not only would nearly half of the buildings in L.A. become uninhabitable due to structural damage, but essential infrastructure systems would collapse almost instantaneously.

In their model, the thick sediments that downtown LA sits upon amplify the strong shaking of the quake, which would happen around 75 seconds after the first small signal of the earthquake.

Ground motions would be of “Intensity 9”, corresponding to accelerations of one G, causing significant damage to buildings. The model suggests the collapse of possibly around 1% of the buildings in an area of 10 million people.

The end result would be that around half the buildings in the area would have to be abandoned. But the model’s most disturbing results show that beyond the building damage there would be significant disruption of inter-dependent infrastructure.

Transportation, gas and electricity supplies, sewerage systems, water supplies and communications would all be affected.

Whether a modern civic society could operate under such conditions is questionable. At the instant of the USGS model earthquake, debris would close roads, extinguish traffic lights, water supplies would be cut off, and emergency responders would have difficulty operating.

Beyond that, the disruption of the supply chain also becomes an issue, pointed out Dr Jones. The move towards a “just in time” economy in grocery stores and elsewhere has introduced additional vulnerability.

There are few warehouses or stockpiles of food on the western side of the San Andreas fault.

The water system is vulnerable: 70% of the water pipes in Southern California are made of brittle concrete which would likely fail in a large quake, with LA served by water supplies that traverse the San Andreas fault.

Even repairing the pipe network was stated as an issue, since current pipe manufacture in the US is insufficient to replace the damage in under six months. Replacement by polyurethane piping, which can withstand earthquake shaking, could overcome this problem.

The Los Angeles metropolitan area has a population of 12.8 million people, the majority of who would be out of food and water within seconds following this disaster. According to the USGS report, up to half of the population could be without shelter due to either building collapse or the possibility of collapse. Emergency responders would not be able to make it to affected areas because roadways would be destroyed, and those that were undamaged would be jam-packed with people trying to leave the city.

It would be a complete and utter disaster.

Moreover, as soon as those 12.8 million people realized that help wasn’t coming, they’d make their way out of the city by foot in what has been described by James Rawles as the golden horde, and they would leave destruction in their wake as they scrambled for resources.

After Hurricane Sandy it only took 72 hours after grid-down for the initial stages of societal breakdown to begin setting in. We saw the same scenario play out during Hurricane Katrina. In both instances government emergency responders were overwhelmed and unable to provide victims with the basic necessities for life. Those disasters affected on the order of about 50,000 to 100,000 people.

Now imagine what happens when we’re talking numbers on the scale of millions.

The Prepper Conundrum: To Bug In or Bug Out (Ready Nutrition)