Urban Disasters: Have These 20 Items On You If You Want to Make It Home 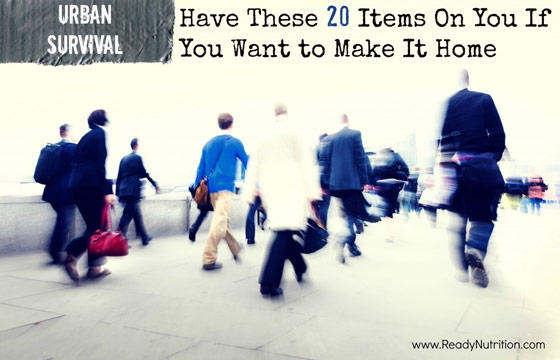 This guide was originally published by Tess Pennington at ReadyNutrition.com

Tess is the author of The Prepper’s Blueprint: A Step-By-Step Guide To Prepare For Any Disaster

From previous disasters, we find clarification and better ways to prepare. Urban disasters happen all the time leaving many stranded in the city. Consider for a moment what you would do if you found yourself in the midst of an emergency where you couldn’t get home using your vehicle. For example, after the terror attacks in New York, the country’s transportation system was shut down – including city transportation systems. Due to the destruction of this event, many commuters were left with no other option but to walk home. Another example occurred in Tokyo after a number of sizable earthquake tremors occurred, many commuters and students were stranded after railways were temporarily stopped. As a result, the majority of commuters who are unable to return home had to wait in facilities such as offices and stations until railway services resumed. Source Severe weather and car breakdowns can also be a reason for having to walk home.

Between work and commutes, most of us spend a majority of our time away from home. About 8% of workers in the USA have commutes of an hour or longer, and nearly 600,000 full-time workers endure “megacommutes” of at least an hour-and-a-half and 50 miles, according to new U.S. Census data on commuting. The national average, one-way daily commute is 25.5 minutes.

If an emergency occurred while you were at work, would you be equipped to handle the ordeal?

Have you considered what you would do if you had to walk back home? How many miles would it take for you to get home? If the average one-way commute is 25 miles, not many could make that in a single day. It could take on average 10-12 hours of straight walking at a fast pace – and that is only if you are in good shape and have no physical limitations. For the majority of us, it would be a multi-day journey to get home.

One of the biggest issues I see is preparedness experts loading up their get home bags and adding additional weight. To prepare for an urban disaster scenario, consider having a lightweight bag packed with the bare essential of gear to get home. This is not your fully loaded bug-out bag. The contents of a get home bag should be minimal and the items stored should be able carry you through the duration of getting home. Keep practicality and weight of the contents in mind when putting your gear together. If you are walking long distances, you do not want to be lugging around a pack with non-essential items.

20 Must-Have Items to Add to Your Get-Home

Depending on the area you live, you may want to consider using a small messenger bag or small hiking pack. If you live in an area where the bag wouldn’t draw too much attention, consider a duffle bag or a Maxpedition Versipak type bag. These are the perfect size for this type of get home bag and both have adequate space to add most of these lightweight items.

Emergencies happen all the time – even while we are at work. It takes a few minutes to gather these items together and create a dependable get home bag. We never know when the next emergency will hit and these 20 items could save your life.

What items do you keep in your bug out bag for work?