Updated Videos: Watch This Tolerant Liberal Get Thrown Off A Plane After Threatening To Puke On Trump Supporter 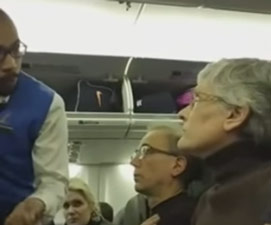 It’s one thing to have an open discussion and free exchange of ideas. It’s a whole ‘nother matter to be harassed and threatened, which is what this tolerant liberal did to a Trump supporter on a recent flight.

Most of it, including her eventual walk of shame off the airplane, were caught on video.

Trump supporter Scott Koteskey was boarding a plane back to Seattle after the Trump Inauguration this weekend.

When he boarded the plane he was immediately insulted and harassed by the old liberal hag sitting next to him.

She told Scott she was going to get drunk and throw up on him because he supported Donald Trump.

Her combative and holier-than-thou attitude quickly changed when she realized she was being kicked off the plane, though she did try to blame Koteskey for “being in her space,” which in and of itself is a ridiculous argument considering both passengers were sitting in the plane’s economy class seats.

In 2017 we have a variety of camera angles to choose from and as we can see from the video below, while the tolerant liberal’s husband realizes they have been banned from the flight, the woman continues to talk shit to Koteskey, who for a violent, racist and mysoginistic Trump supporter, remains calm and collected throughout the encounter.

Mr. Koteskey is the big winner in this one, as he notes at the end of the video that he now gets the whole row to himself:

Here’s a third angle, captured by another passenger, in which we can see airport security personnel directing the woman and her husband off the plane.