Update: FAA Responds To Drone Hunting: “Could Result in Criminal or Civil Liability” 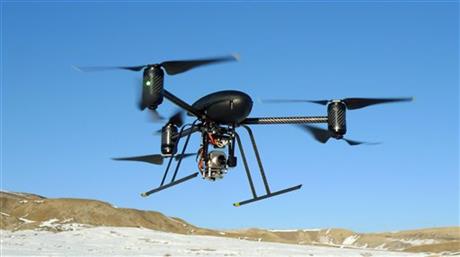 In response to overwhelming public support for a new ordinance in the small Colorado town of Deer Trail, which would issue hunting licenses and bounties for shooting down unmanned aerial vehicles, the Federal Aviation Administration has warned that penalties for those who engage drones could be severe.

The FAA released a statement in response to questions about an ordinance under consideration in the tiny farming community of Deer Trail, Colo., that would encourage hunters to shoot down drones. The administration reminded the public that it regulates the nation’s airspace, including the airspace over cities and towns.

A drone “hit by gunfire could crash, causing damage to persons or property on the ground, or it could collide with other objects in the air,” the statement said. “Shooting at an unmanned aircraft could result in criminal or civil liability, just as would firing at a manned airplane.”

Phillip Steel, who authored the original proposal in Deer Trail, Colorado says his ordinance is a “pre-emptive strike”  against what he calls a “virtual prison” being created through continued expansion of the surveillance state.

He dismissed the FAA’s warning. “The FAA doesn’t have the power to make a law,” he said.

The FAA is working on regulations to safely integrate drones into the skies over the U.S., where manned aircraft are prevalent. The Congress gave the FAA until 2015 to develop the regulations, but the agency is behind schedule. FAA officials have estimated that once regulations are in place, thousands of drones will be in use across the country for a wide variety of purposes, from helping farmers figure out which crops need watering to tracking sea lions in remote rocky outcroppings to aiding search and rescue missions.

But the Deer Trail proposal is the latest ripple in a spreading backlash against drones. Dozens of laws aimed at curbing the use of the unmanned aircraft have been introduced in states and cities. Privacy advocates have expressed fear that police will use drones to cheaply and effectively conduct widespread surveillance without warrants.

That the FAA was forced to issue a warning suggests that drones, despite their popularity in government and law enforcement circles, are not as popular as some may think, especially in the aftermath of the NSA surveillance scandal that involves the cataloging, analyzing and archiving of some 20 trillion electronic records that include phone calls and emails.

The Department of Homeland Security recently advanced a plan to deploy “public safety” drones in the skies over America, an action Congress authorized last year calling for the deployment of 30,000 drone surveillance vehicles by 2020.

The increased dependence of domestic law enforcement and military personnel on drone technology has left Americans concerned that like the thousands of innocent civilians being killed by these faceless robots overseas in various anti-terror campaigns, they, too, may become enemies of the State under powers authorized by the National Defense Authorization Act and the Patriot Act.

Earlier this year four American citizens were killed by a drone strike approved by the President of The United States. They were suspected of terrorist activity and killed without due process.

In a recent statement, President Obama hinted that he has the authority to initiate domestic drone strikes against American citizens, though he suggested the rules for such attacks inside of the United States would be different from those governing actions on foreign soil.