Editor’s Note: This report is an update to the alert we published Wednesday evening regarding a possible “dirty bomb” and emergency services deployment of Coast Guard, FBI, local police and hazmat teams to Charleston, South Carolina.

The following report was originally published by Shepard Ambellas at Intellihub.com

George Web appeared on the Jason Goodman YouTube channel Thursday to report that the cargo ship “Maersk Memphis” may be carrying a “dirty bomb” aboard which later prompted law enforcement officials to search the vessel which is currently moored in the Wando Terminal following a call to the U.S. Coast Guard made by Web.

“The dirty bomb is going to be on the Memphis in one of our ports, I’ll tell you that right now,” Web stated, who said he got his information from one of five people online. “I’m an American, I have nothing to gain here […] this is clear and present danger.”

Goodman admits he placed a call to the U.S. Coast Guard Southeast to make the report which the online researcher maintains was provided to him by a “credentialed counter-intelligence expert [with] over thirty-years in the business.”

“I just got off the phone with the Coast Guard in South Carolina and they were obviously very, you know, hesitant to call out all the dogs and call out all the radiation meters and all of that without knowing who our source is,” Web told his co-host Jason Goodman in a YouTube video posted on June 14. ”

Subsequently, the Maersk Memphis was evacuated by local, state, and federal law enforcement late Thursday night to allow a authorities to conduct a full sweep of the vessel after the Coast Guard established a 1 nautical mile safety zone around the ship.

24-minutes before midnight, the Coast Guard tweeted: “#Update A 1 NM safety zone has been established around the vessel while law enforcement authorities investigate the threat.”

#Update A 1 NM safety zone has been established around the vessel while law enforcement authorities investigate the threat.

By 2:43 a.m. the Coast Guard issued an all clear after focusing its search on 4 specific containers, finding no device.

“#update Unified Command determines no existing threat to the port. Terminal will reopen & safety zone has been lifted,” USCGSoutheast tweeted.

#update Unified Command determines no existing threat to the port. Terminal will reopen & safety zone has been lifted.

“#update there were 4 containers where threat was posed at terminal in Charleston, SC. These have been scanned and cleared by authorities.”

#update there were 4 containers where threat was posed at terminal in Charleston, SC. These have been scanned and cleared by authorities.

At 2:57 a.m. Friday morning the Coast Guard announced that “the original reporting source of the threat in port of Charleston has been detained by authorities for further questioning.”

#update the original reporting source of the threat in port of Charleston has been detained by authorities for further questioning.

An updated Media Advisory released by the Coast Guard and Department of Homeland Security reads as follows: 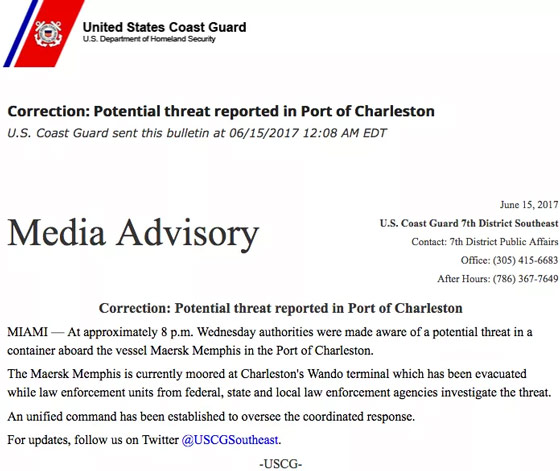 Unrelated to the Coast Guard arrest, George Web was independently detained in Ohio by the Zanesville Police for “driving under the influence of alcohol,” according to his co-host Goodman who released the info on a Friday morning internet transmission. Goodman also reported that Web is set to appear in court Friday.