University of California Guide: Saying “I’m Not Racist” Is Racist 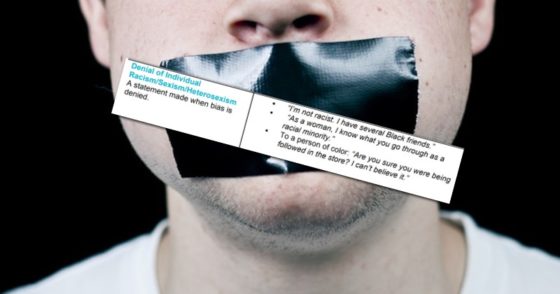 An official University of California list of racist “microaggressions” asserts that saying “I’m not racist” is racist.

The university guide defines microaggressions as, “everyday verbal, nonverbal, and environmental slights, snubs, or insults, whether intentional or unintentional, that communicate hostile, derogatory, or negative messages to target persons based solely upon their marginalized group membership.”

Examples listed on the university’s official website include telling someone, “you speak English very well,” telling an Asian person that they are good at math and insisting that “America is a melting pot”.

Using the phrase, “I’m not racist, I have several black friends” is also listed as an example of “racism”.

Radio host Dennis Prager highlighted some other examples, which include saying, “There is only one race, the human race,” and also remarking, “I believe the most qualified person should get the job.” Thinking that, “America is the land of opportunity” is also racist, according to the guide.

From the official University of California list of racist “microaggressions”:
• "There is only one race, the human race.”
• “I believe the most qualified person should get the job.”
• “America is the land of opportunity.”https://t.co/xxrsMrq6Xu

A white woman who clutches her purse or bag when approached by a black or Latino person is also committing a racist microaggression, according to the guide. Asking non-white people why they are being quiet or loud is also racist.

We’ve previously reported on other universities that use similar guidelines for “microaggressions,” including the University of Wisconsin-Milwaukee, which launched a campaign that claimed using the term “politically correct” as a pejorative is a politically incorrect “microaggression”.

A “Bias-Free Language Guide” posted on the University of New Hampshire website also asserted that the word “American” is “problematic” because it “assumes the U.S. is the only country inside [the continents of North and South America].”