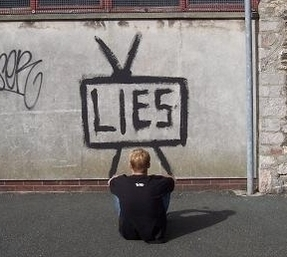 Editor’s Comment: There is no shame whatsoever in the powers that be. Despite the fact that the “mainstream media” routinely distorts facts, reads from scripts and teleprompters and arguably even deliberately frames falsities, it is the alternative media and the dissenting voice that is being labeled as “fake,” untruthful and unworthy of anyone who might care to read it.

Rather than continue competing with independent journalists, caught-on-phone reports and voices from the other side of complex issues, the powers that be would prefer to try to put the genie back in the bottle, and to put bumpers on the bowling lanes of the world wide web. Streamlined, authorized, sanitized and, ultimately, corporate friendly. What will the future look like? Will anyone even notice when the truth disappears?

Facebook to Decide What’s Real Vs. Fake News for Users

Social media giant Facebook has announced the site will prompt users if they attempt to share news articles disputed by third parties, the latest in an array of efforts to stifle independent media.

In an announcement Thursday, Facebook said it would aid the spread of “hoaxes and fake news” by partnering with media organizations and fact-checkers, including Snopes, ABC News, The Washington Post and The Poynter Institute.

In Facebook’s own words:

“If the fact checking organizations identify a story as fake, it will get flagged as disputed and there will be a link to the corresponding article explaining why. Stories that have been disputed may also appear lower in News Feed.”

The site explains: “Once a story is flagged, it can’t be made into an ad and promoted, either.”

If a story is proven fake, users will be shown a prompt that says, “Disputed by 3rd parties,” when they attempt to share the article.

Facebook claims it will focus on “the worst of the worst, on the clear hoaxes spread by spammers for their own gain, and on engaging both our community and third party organizations.”

As noted by Infowars’ Paul Joseph Watson, Facebook’s appointment of establishment media organizations as their foremost authorities on fake news is puzzling given a majority of Americans do not trust the mainstream media.

How can the mainstream media be empowered to decide what’s “fake news” when two thirds of the American public don’t even trust them?

And of course the organizations chosen to sort fake from real news aren’t infallible either. Just last week The Washington Post, one of Facebook’s new fact checkers, had to retract a story claiming various media outfits were working with the Russians to push Kremlin propaganda.

Additionally, The Poynter Institute’s fact checking project, launched last year, was revealed to have been funded by grants from organizations with close ties to the Obama White House, guaranteeing bias will be prevalent in the censorship of so-called fake news.

While Facebook claims it’s protecting users from the scourge of fake news, it’s more likely the company will employ the new feature to blacklist information which runs contrary to mainstream media narratives.