Uber Driver Fined $250 For Not Being Able To Speak English: “I Felt Discriminated Against” 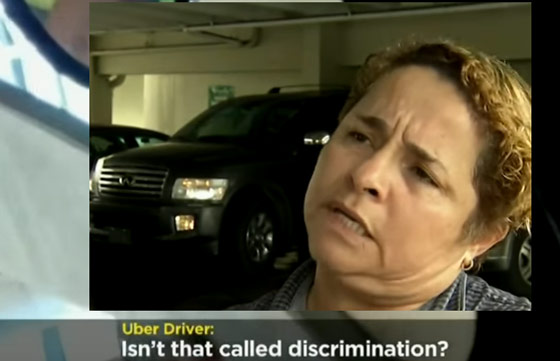 An Uber driver who was dropping off a customer at the Miami Airport has be fined $250 by airport security because she doesn’t speak English.

According to the Miami Herald, the security officer approached Carmen Hechevarria’s vehicle during passenger drop-off and began addressing her in English. After several attempts to communicate, officer Detra Johnson realized that Hechevarria didn’t understand English.

“She looked at me like she did not understand me,” MIA officer Detra Johnson wrote. Johnson called over a Spanish-speaking colleague to translate. “The more he spoke to her,” Johnson wrote, “the more he realized she could not speak or understand English.”

Johnston then proceeded to write Hechevarria a $250 citation for violating a Miami-Dade County law requiring for-hire drivers to “be able to communicate in the English language.”

“I felt discriminated against,” Echevarria told the station in Spanish. “I asked the (passenger sitting in her car) ‘Can you please help translate what she is saying?’ Then she asked why, if I was an Uber driver, I didn’t speak English.” (Channel 6 Miami)

An Uber spokesman responded to the incident in support of the driver, noting that the law specifically says drivers need to be able to “communicate” in English, not necessarily speak it:

“It says they have to communicate in English,” Uber spokesman Javier Correoso said of the county rule. “It doesn’t say they have to speak English.”

Which, of course, begs the question: What is the difference in this scenario? Had a translator not been standing by, how would Hechevarria been able to “communicate” without speaking basic English?

While the driver may feel she is being discriminated against, the fact is that road signs and interactions with other drivers, law enforcement officers and pedestrians require speaking the language of the country you happen to be operating in, as highlighted by the Transportation Department:

Makes sense to us, but that probably just means we’re racist xenophobes.