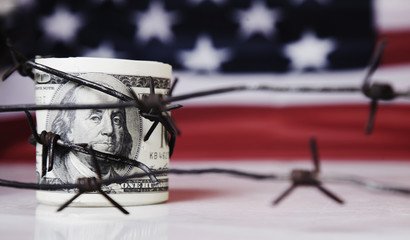 The United States government’s total public debt outstanding has reached $22.6 trillion with a few days left to go in the government’s 2019 fiscal year.  And that is not taking into account any of the unfunded liabilities (politicians’ promises to steal money and redistribute it).

According to the Independent, usually, whenever anyone talks about the national debt, its size is compared with that of the U.S. economy, the largest in the world, which was estimated to be $21.3 trillion through the second quarter of 2019. Against that benchmark, the U.S. national debt is between 105 and 106 percent of the nation’s GDP. However, the debt to GDP ration may not be the best way to gauge just how much trouble the federal government has gotten themselves into,

Because the national debt is owed by the U.S. government to its creditors and must be paid back to them from its income (taxation in the form of theft and extortion), it would make more sense to compare the size of the national debt with the amount of money it takes in each year, which is predominantly made of up receipts from taxes.

With the national debt having risen so high with respect to the U.S. government’s revenues, is it wrong to consider that we are indeed experiencing a crisis in the current era? Especially with the government already collecting record high tax revenues. Does anything about this time really make it all that different from all the previous times of crisis when the burden of the national debt has risen so high? –Independent

How will this affect us? It’s difficult to say, except never expect the government to steal less of your money. The tax burden will continue to rise and the government will continue to consolidate their power to steal claiming altruistic means such as the Medicare for All scam. The biggest problem is that the money created out of thin air to provide the debt to the government continually becomes worthless making all the dollars you have worth less every day. The only thing we can do is get our personal finances in order.

Across the ages, in every survival story, a disaster of some sort plays a prominent role. Sometimes the part is played by the government, sometimes it is played by Mother Nature, and other times, the role is taken on by a random mishap. If we have learned one thing studying the history of disasters, it is this: those who are prepared have a better chance at survival than those who are not. A crisis rarely stops with a triggering event. The aftermath can spiral, having the capacity to cripple our normal ways of life. Because of this, it’s important to have a well-rounded approach to our preparedness efforts. Due to the overwhelming nature of preparedness, we have created The Prepper’s Blueprint: The Step-By-Step Guide To Help You Through Any Disaster

to help get you and your family ready for life’s unexpected emergencies.