U.S. Military Grants Itself the Authority to Deploy Troops in American Cities Without Presidential or Local Approval 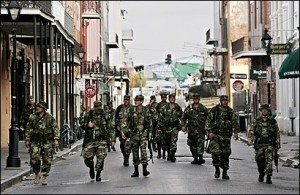 Military no longer under civilian control?

In a move that makes clear the direction that our country is increasingly heading towards, the Department of Defense has published an update to a US code that outlines military power during civil unrest.

The code, ““Defense Support of Civilian Law Enforcement Agencies,” was slightly altered during a May 13th update which now allows the military to unilaterally declare martial law without presidential approval.

Multiple sections of the code outline plans and policies for a martial law scenario and should be considered a must read for any American worried about their freedoms in what has become a hostile American police state.

The primary restriction on DoD participation in civilian law enforcement activities is the Posse Comitatus Act. It provides that whoever willfully uses any part of the Army or the Air Force as a posse comitatus or otherwise to execute U.S. laws, except in cases and under circumstances expressly authorized by the Constitution or Act of Congress, shall be fined under title 18, U.S.C., or imprisoned not more than two years, or both. Section 182.6 (a) describes in detail the assistance that the Department of Defense may and may not provide civilian law enforcement agencies.

b. Support During Civil Disturbances
The President is authorized by the Constitution and laws of the United States to employ the Armed Forces of the United States to suppress insurrections, rebellions, and domestic violence under various conditions and circumstances. Planning and preparedness by the Federal Government, including the Department of Defense, for civil disturbances is important due to the potential severity of the consequences of such events for the Nation and the population. The employment of Federal military forces to control civil disturbances shall only occur in a specified civil jurisdiction under specific circumstances as authorized by the President, normally through issuance of an Executive order or other Presidential directive authorizing and directing the Secretary of Defense to provide for the restoration of law and order in a specific State or locality.

A little further down within the code the above text is made completely irrelevant. (emphasis mine)

Domestic emergencies. Emergencies affecting the public welfare and occurring within the 50 states, District of Columbia, Commonwealth of Puerto Rico, U.S. possessions and territories, or any political subdivision thereof, as a result of enemy attack, insurrection, civil disturbance, earthquake, fire, flood, or other public disasters or equivalent emergencies that endanger life and property or disrupt the usual process of government. Domestic emergencies include civil defense emergencies, civil disturbances, major disasters, and natural disasters.

Emergency authority. A Federal military commander’s authority, in extraordinary emergency circumstances where prior authorization by the President is impossible and duly constituted local authorities are unable to control the situation, to engage temporarily in activities that are necessary to quell large-scale, unexpected civil disturbances
because:

Most worrying is that the examples given as possible reasons for when the military would need to use their, “emergency authority,” are so broad and open to interpretation that it essentially gives them the power to declare martial law whenever they choose.

A recent piece published by the Long Island Press further expanded on the repercussions of these “subtle” changes to the US code.

The lines blurred even further Monday as a new dynamic was introduced to the militarization of domestic law enforcement.

By making a few subtle changes to a regulation in the U.S. Code titled “Defense Support of Civilian Law Enforcement Agencies” the military has quietly granted itself the ability to police the streets without obtaining prior local or state consent, upending a precedent that has been in place for more than two centuries.

Bruce Afran, a civil liberties attorney and constitutional law professor at Rutgers University, calls the rule, “a wanton power grab by the military,” and says, “It’s quite shocking actually because it violates the long-standing presumption that the military is under civilian control.”

What exactly giving the power of martial law to a military commander actually means was also explained:

One of the more disturbing aspects of the new procedures that govern military command on the ground in the event of a civil disturbance relates to authority. Not only does it fail to define what circumstances would be so severe that the president’s authorization is “impossible,” it grants full presidential authority to “Federal military commanders.”

According to the defense official, a commander is defined as follows: “Somebody who’s in the position of command, has the title commander. And most of the time they are centrally selected by a board, they’ve gone through additional schooling to exercise command authority.”

In doing so, this commander must exercise judgment in determining what constitutes, “wanton destruction of property,” “adequate protection for Federal property,” “domestic violence,” or “conspiracy that hinders the execution of State or Federal law,” as these are the circumstances that might be considered an “emergency.”

“These phrases don’t have any legal meaning,” says Afran. “It’s no different than the emergency powers clause in the Weimar constitution [of the German Reich]. It’s a grant of emergency power to the military to rule over parts of the country at their own discretion. 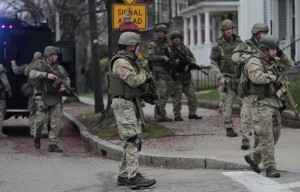 This power grab comes at a time when police forces throughout the country are already becoming increasingly militarized, with the recent police response during the manhunt for one of the Boston Bombings suspects being a prime example.

Rather than a force of peacekeepers, the police looked more like troops on the battlefield, and in many ways they acted like it. This has all been made possible by little reported on Pentagon programs that give military gear to police forces.

The focus on the DoD regulatory change obscures the creeping militarization that has already occurred in police departments across the nation.

Even prior to the NDAA lawsuit, journalist Chris Hedges was critical of domestic law enforcement agencies saying, “The widening use of militarized police units effectively nullifies the Posse Comitatus Act of 1878.”

This de facto nullification isn’t lost on the DoD.

According to this official there has purposely been a “large transfer of technology so that the military doesn’t have to get involved.” Moreover, he says the military has learned from past events, such as the siege at Waco, where ATF officials mishandled military equipment. “We have transferred the technology so we don’t have to loan it,” he states.

This so called large transfer of technology has allowed law enforcement to basically change their entire purpose by implementing gear and weaponry that twenty years ago would never have been considered for use on the American people.

Sadly, America is increasing becoming eerily similar to many different dictatorships throughout history. From unilateral powers to declare martial law, to the ability to indefinitely detain American citizens without charge, the powers that be have truly moved towards an American police state.

Daniel Jackson is a seasoned journalist with a passion for exposing corruption and the lies of the global elite. DJ has a passion for truth and liberty that is shown through his extensive reporting on numerous globally significant topics not normally covered by the corporate controlled media. He is is a writer, researcher and editor for The Daily Sheeple. Wake the flock up!