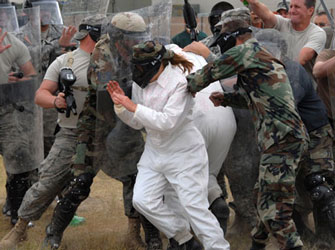 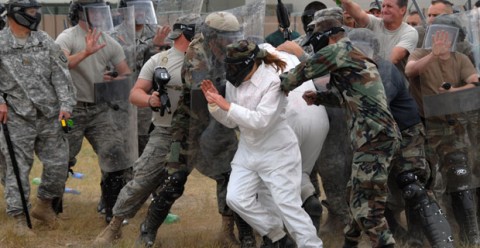 The U.S. Army is preparing to fight political dissidents who challenge the power of the state as “megacities” become the battleground of the future, according to a new report in the Army Times.

The article details how the Army’s Capabilities Integration Center (ARCIC) worked with US Army Special Operations Command, the chief of staff’s Strategic Studies Group and the UK’s Ministry of Defence earlier this year to wargame the future of armed combat, which will revolve around the neutralization of groups “who can influence the lives of the population while undermining the authority of the state,” a chillingly vague description which could easily be applied to political dissidents.

The plan foresees an unprecedented realignment of U.S. military strategy focused around putting “boots on the ground” in megacities to deal with “politically dispossessed” populations while relying on “more lethal and more autonomous” methods.

“It is inevitable that at some point the United States Army will be asked to operate in a megacity and currently the Army is ill-prepared to do so,” asserted a report by Army Chief of Staff Gen. Ray Odierno’s Strategic Studies Group, while Lt. Gen. H.R. McMaster warned that the Army will increasingly have to expand its presence to battle an enemy which operates in “other contested spaces like organized crime and politics.”

The report also notes how the Army will utilize directed energy weapons which “would allow U.S. to have direct-fire capabilities with significant logistics reduction, and to counter enemy long-range missile capability.”

The article also cites a recent report by the Australian Army which identifies the fact that “these cities represent the battlefields of the future.”

Confirmation that the U.S. Army is preparing to fight disaffected groups and individuals who attempt to ‘undermine the authority of the state’, which could apply to a whole host of perfectly legal political activities, is particularly concerning given the recent militarized police response to unrest in Ferguson, Missouri.

A 2012 study by the National Consortium for the Study of Terrorism and Responses to Terrorism at the University of Maryland which was funded by the Department of Homeland Security lists Americans who are “reverent of individual liberty” and “suspicious of centralized federal authority” alongside violent terrorist groups.

Will citizens who ‘undermine the authority of the state’ by espousing these beliefs also be a future target for the U.S. Army under this new doctrine?

Earlier this year we also highlighted how the U.S. Army built a 300 acre ‘fake city’ in Virginia complete with a sports stadium, bank, school, and an underground subway in order to train for unspecified future combat scenarios. The city included a Christian chapel and subway signs in English, suggesting it was intended to double as a domestic town in addition to an overseas location.

The Army Times report is also disconcerting in light of a recently uncovered U.S. Army training document which detailed preparations for “full scale riots” within the United States during which troops may be forced to engage in a “lethal response” to deal with crowds of demonstrators.

As with previous examples, the manual made it clear that such operations were being planned not just for foreign occupations but for inside the “continental United States (CONUS)” in the event of “unruly and violent crowds” where it is “necessary to quell riots and restore public order.”

The document also describes the deployment of a “lethal response” directed against “unarmed civilians,” including “sniper response” and “small arms direct fire,” while making reference to domestic political upheavals such as the 1999 demonstrations against the WTO in Seattle.

While the U.S. border remains wide open amidst reports of ISIS insurgents planning attacks, the fact that the security apparatus of the United States is more concerned with taking on political dissidents inside megacities is likely to prompt fresh outrage.