…Unsafe radiation levels in Japan confirmed in drinking water, soil, food…. Japanese officials dump thousands of tons of water into sea; say it will be safe through dilution

…US Environmental Protection Agency: we do not expect to see radiation at harmful levels reaching the U.S. from damaged Japanese nuclear power plants (link)

…No Need to Worry: FEMA, DHS, White House, and [for the most part] Mainstream Media remain silent on specifics and potential dangers to US residents (link)

…The Intel Hub Update: Concentrated radiation cloud from Japan projected to reach Northwest US by April 6, 2011. Sourced via Department of Atmospheric and Climate Research (ATMOS) at the Norwegian Institute for Air Research (NILU):

…A study of government propaganda, lies, and downplaying crisis severity: Watch: The Battle of Chernobyl (90 minutes)

…While Libya has taken the headlines as of late, Japan still in peril…

…Getting worse: Radiation levels in Japan are rapidly rising… Levels 1600 times higher than normal 20km from powerplant… We have to assume Japan will have a long-term issue…The Intel Hub Reports:

…Official report forecasts a small decline in GDP. Says Japan’s economy will grow by 1% this year

…Nikkei 225 bounces back from initial collapse…still down 1000 points

…Potassium iodide prices go through the roof… Bidders drive prices to over $200 a pack! (link)

…180 workers, rotating in groups of 50, are working on reactors…physicist calls it a suicide mission

…We’re very close now to the point of no return

…Russia’s Nuclear Chief warns all six reactors could meltdown, but no nuclear explosion will result (link)

…US Military Shuts Down Portion of Internet on ‘*.mil’ computer systems to open up bandwidth for emergency response…high traffic sites like Yahoo.com, Amazon.com, eBay.com not available. (link)

…International Atomic Energy Agency: dose rates at reactors 3 and 4 up to 400 millisieverts-per-hour, equivalent to about 2000 chest x-rays per hour (IAEA Website – site may be down due to extremely high traffic volume)

…US Military said to have been asked to assist. No details provided.

…Jacqueline Williams, program director for radiation medicine at the University of Rochester, says the chance for a radiation plume reaching US is “close to zero” (link)

…Europe not convinced as markets tumble.

…Japanese stock market down 2000 points in less than a week.

…situation in Japan is escalating

…Over half a million evacuated. Prime Minister of Japan urges residents within 19 miles of reactors to flee or bug in

…Radiation levels around Japanese cities in real time (Link) *Note, due to an extremely large volume of traffic, this web site may not be accessible.* 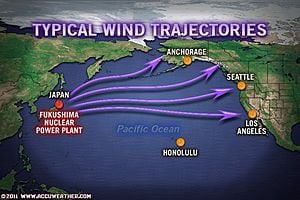 …Nuclear Regulatory Commission spokesman David McIntyre: “Right now it’s quite possible that there could be some radiation floating over the United States“

Here’s a chart showing the range of radiation levels in milli sieverts (mSv). Currently up to 400mSv per hour are being recorded in the immediate vicinity of Fukushima. Remember, although these figures may suggest that the level of radiation being recorded at Fukushima is not extremely high, the danger is constant exposure over a period of time. For this reason, people within the 20km evacuation zone are at high risk of serious harm.

In Mito, another town in the area, long lines formed outside a damaged supermarket as hundreds waited for medicine, water and other supplies. Supplies ran low as people stocked up, not knowing how long it would take for fresh goods to arrive.

“All the shops are closed, this is one of the few still open. So I came to buy and stock up on diapers, drinking water and food,” Kunio Iwatsuki, 68, told Reuters.

…Tens of thousands missing in Japan

…Fuel rods may have melted

…Unofficial fallout map (Note that this map has not yet been legitimately sourced, thus the estimated “Rad” levels are as of yet unconfirmed, though the wind patterns match those of the 180 hour forecast above):

***This Nuclear Fallout Map below has been identified as a hoax. As mentioned in our original posting, the source was not confirmed. We chose to publish this map to demonstrate the fallout pattern in the event high levels of radiation were released in Japan. **** 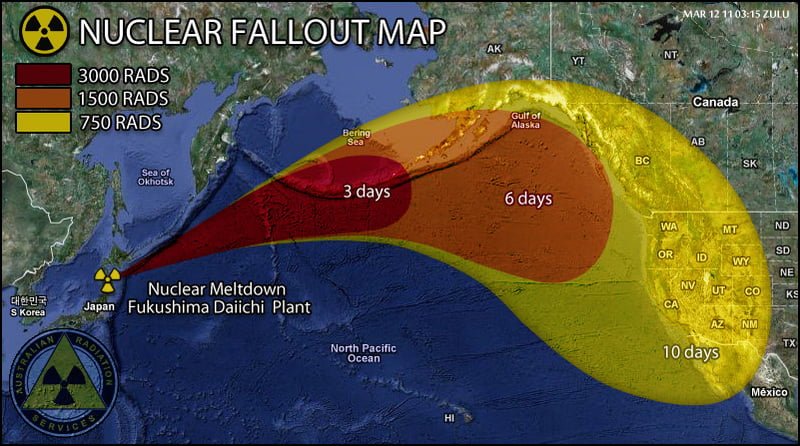 …As of yet, the estimates for radiation release levels in the event of meltdown as measured in Rads/Greys is unknown, therefore Rem/Microrem biologically effective doses cannot be measured accurately…

…radiation level outside the reactor became elevated to 1,015 microsievertâ€”the equivalent of being exposed to the maximum allowable level for a full year in a single day. The level has since come down sharply.

…Japanese emergency officials are planning to distribute iodine to those in nuclear radiation zones:

The Effects of Nuclear Weapons

…California: 1 Confirmed Dead, 2 Swept out to sea as they watched incoming Tsunami

…Oregon: 4 Swept out to sea, rescued by Coast Guard

…Reports that Fukushima nuclear reactor is at 2.1 times normal pressure

…Radiation reportedly at 1000 times normal and rising; no evacuations of plant or surrounding areas as of yet.

The following just released video from PBS Newshour documents just how powerful the Japanese Tsunami was. It completely demolishes an entire village in under a minute:

The Sakurajima Volcano on Southern Tip of Japan has begun erupting:

…An estimated 8.9 magnitude earthquake off the east coast of Japan sent Tsunamis across the Pacific, striking Japan with waves reportedly as high as 33 feet.

…Other Southeast nations have also been struck.

…Hawaii was inundated with a Tsunami earlier this morning.

Wave’s reportedly not unusually high. Officials warn waves may get as high as 6 feet:

The scene at a local grocery store in Hawaii as residents anticipate the Tsunami: 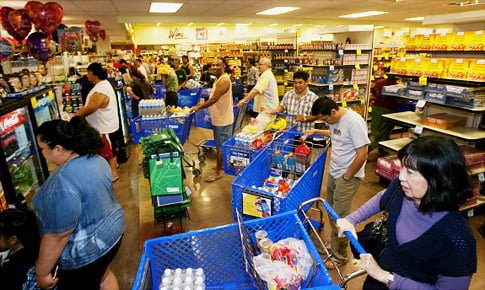 Tsunami in Open Sea – Headed towards other south east Asian countries…Almost all of Pacific Basin on alert:

officials say levels of radioactive iodine in some city tap water is two times the recommended limit for infants.