TSHTF Inflation: “What YOU Will Pay for What You Need to Survive” 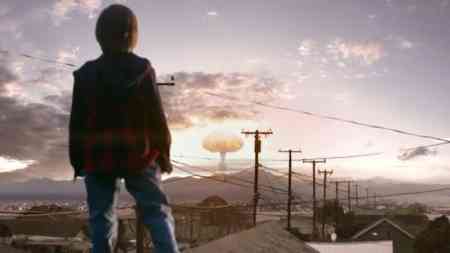 This extremely informative article has been generously contributed by John Galt. Follow his John Galt FLA web site for essential news, informative analysis and a truly unique perspective on global happenings. Be sure to check out his widely popular The Day The Dollar Died series available for free online, as well as John’s latest The Year After the Dollar Died.

Sounds like a nice stash of survivalist/prepper goods to start with doesn’t it? I could continue on with the list but it only begins to belie the myth that sadly so many members of the prepper community believe to be their ideal that they are 100% prepared for the collapse of America and perhaps Western civilization. How can I make such a statement and not back it up with facts? I shall provide my readers with one fact, the lowly Twinkie: 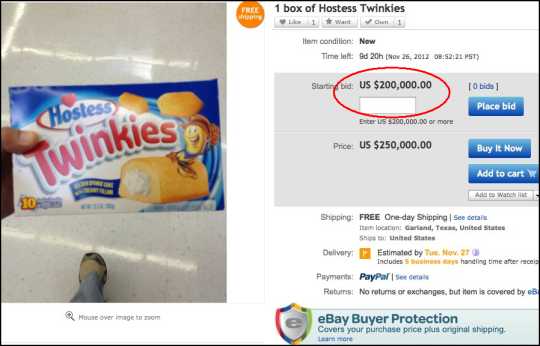 $200,000 for one box of Twinkies? What the hell does that have to do with survival when the proverbial situation arises as TSHTF (look it up if you don’t know what it means)?

This was the case last year when the Hostess Bakery filed for bankruptcy when the unions failed to find a reasonable deal with a corporation which had overpaid for their services for years yet nobody who worked their thought it was enough. In the end, the company filed Chapter 7 bankruptcy, the unions lost their jobs, and the thought of no more Twinkies ever being made ever again thus causing a Twinkie panic and prices to be driven out of reality as there was this belief that people were stupid enough to pay this much for a so-called piece of Americana junk food history.

But this is an isolate incident, right? Uh, no, there were literally hundreds upon hundreds of stupid eBay listings like this: 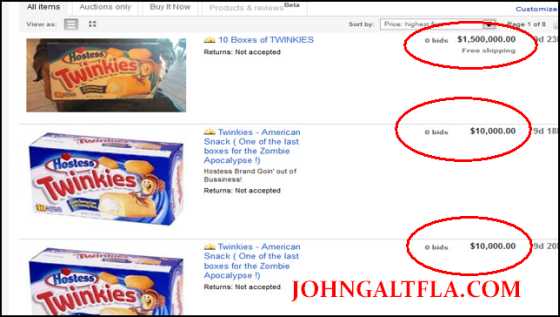 So what does a Twinkie have to do with TSHTF, inflation, and the fallacies of the survivalist community?

To begin with, this article is neither to demean the starting prepper nor launch into my fellow bloggers and authors about their version of what being prepared for the worst case scenario might well be; even though the criticism is valid and should remind everyone of the old adage that NO ONE is totally prepared for a societal collapse.

The theory that many of the Pollyanna view of the end of modern convenience then in the end civilization is that indeed, mankind would seek his brother out and be at his best working together to rebuild and save humanity and rebuild civilization. The other view is the darker perspective, the so-called “Jericho” scenario on steroids where no one can or should be trusted and if one works within a community structure the enemy, in often cases the new or what’s left of the existing government will either extinguish or work with other groups to seize control from any opposition to their way of thinking.

This brings me back to an old posting, a portion of my past where I pointed out the original barter spreadsheet, something most individuals have forgotten about:

(click on the thumbnail to enlarge to full size)

In 2010, I too thought that mankind would be somewhat, not totally, but somewhat reasonable in its assessment of civilization and how and what we would do to deal with each other. I published the spreadsheet based on current prices for 2010 and thought that this guide would provide anyone a basic price list for trade should TSHTF soon after that time.

If you look the version updated on March 20, 2014 the prices have varied some, only because of the value of the dollar and deliberate efforts by yours truly to find the cheapest prices for commodities; however for meat like pork and beef the ratio has exploded beyond belief compared to the staples in the spreadsheet below:

(click on the thumbnail to enlarge to full size)

The problem with the spreadsheet above is that the current regime of pricing might well be extinct within the next 180 days as the world shifts from the petrodollar to a true, commodity based currency. I warned about this problem two weeks ago in the article:

yet only a few American financial outlets took the Russian threat seriously.   Fast forward to the news linked two sentences above, a conflict openly possibly involving NATO troops in a mode of retreat and protect, along with a Chinese government electing to engage its long time enemies as an aggressor. The US Dollar Index would collapse from its absurdly overvalued level of just over 80 as world governments abandon its potential future as the peg for their currencies: 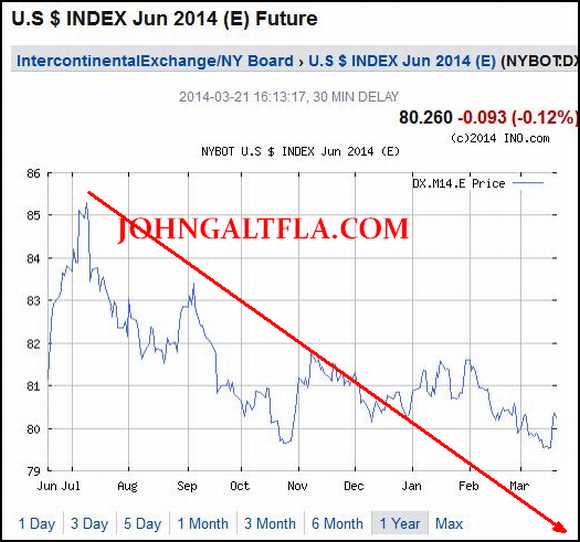 Imagine the impact far beyond groceries of a US Dollar 50% lower than currently valued. There is a lot of insane analysis that in fact the American citizens will indeed behave in a “civilized” manner despite the initial premise that civilization is collapsing. Thus why the chart I present below, priced in only estimated gold and silver valuations might well wake some of my readers from their Pollyanna perspective that we will continue to exist as a normalized group of people despite every civilization’s collapse indicating otherwise: 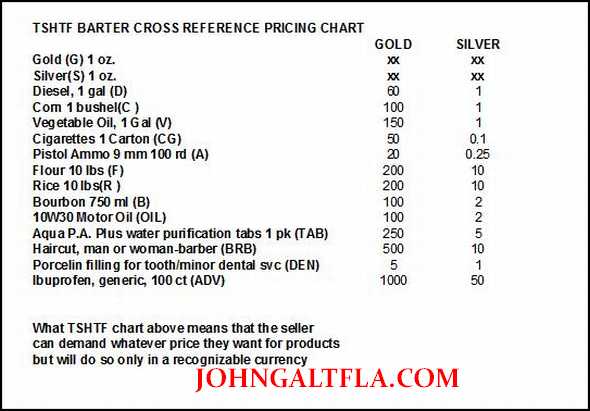 The first question is why no comparisons to other commodities like the previous spreadsheets? That answer is easy:

Screw you, I’ll charge whatever the bleep I want.

You have 100 bushels of corn. So what the hell up?

You have 50 bottles of Jack Daniels for trade? Great, find an alcoholic who is a surgeon to operate on your child who needs his or hers appendix removed.

You have 500 gallons of motor oil and diesel fuel? BFD. I have a gasoline powered vehicle, enough motor oil to make the trip to Mexico and back. And really don’t care if your wife has a disease and she needs my gold to buy her cure.

The reality is that all perceived norms of civilization are out the window once organized governments and currencies collapse. Inflation is the reality of the day as all items are in short supply. Does anyone really think the snipers in Croatia and Bosnia gave one rat’s ass about how many eggs your chicken could poop when they held the high ground, the ammo supply, and enough precious metals to reload until the freaking USMC showed upon the scene?

My friends, and enemies, everyone still thinks in the norm. The two spreadsheets about fair barter only apply in a semi-civilized society. In reality, TSHTF inflation occurs when those who have the most toys, the most gold and silver, get to dictate what YOU will pay for what you need to survive. If you do not have what it takes for barter, you will starve, your children may well die, or worse, you might get turned in to the new “authorities” of the upcoming DHS wet dream era.  It is time to dismiss the insane, insipid, and antiquated idea that America will continue to function as a “Christian” or “Judeo-Christian” society when it all collapses. The truth is that it will look more like the South in the 1865-1867 time period, or worse, the Balkans when Yugoslavia disintegrated.

At that point in time it is survival of the fittest and those who need goods had best have an ample supply of real currency, a 4000 year old plus monetary system, if they wish to survive. If you, my reader does not believe this, do like the 1939 Jew, get in line, get a number to exist and avoid freedom guaranteed with real money within a dictatorship, that of gold, silver, and cunning. As a merchant of life, I would not accept anything less for my family that what I would need in the future to trade or bribe my freedom out of a region for to survive. I need not a truckload of corn, wheat, or fuel. I need not 50,000 rounds of ammunition, three thousand pounds of steak, nor 5,000,000 Advil tablets.

I need what it shall take to move on foot or via transport, using real money to buy my freedom or maintain it behind enemy lines. The alternatives are quite real, quite stark, and quite accurate if anyone has witnessed a FEMA trailer assembly after a natural disaster.

Of course there are alternatives: One could  just move to Venezuela before we collapse here, which is duplicating the errors of humanity’s past: 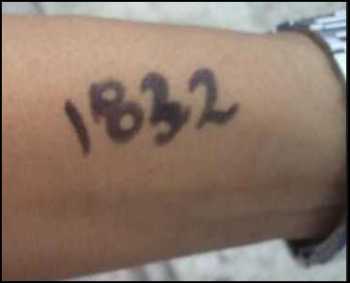 This extremely informative article has been generously contributed by John Galt. Follow his John Galt FLA web site for essential news, informative analysis and a truly unique perspective on global happenings. Be sure to check out his widely popular The Day The Dollar Died series available for free online, as well as John’s latest The Year After the Dollar Died.