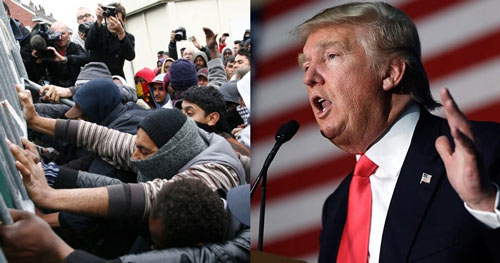 Fresh off his massive victory in Indiana, presumptive Republican nominee Donald Trump told MSNBC’s Morning Joe earlier today that he would stick by his controversial policy on Muslim immigration because the migrant crisis is “destroying Europe”.

Trump’s proposal to place a temporary halt on Muslim immigration to the United States was perhaps his most incendiary of the campaign, but the New York billionaire shows no signs of walking it back.

Asked if he still believed “Muslims should be banned from entering the country until we can figure out what’s going on,” Trump said that he didn’t care if the policy hurt his chances in a general election.

“Look at what’s happening. It’s terrible what they have done to some of these countries of they are going to destroy — they are destroying Europe. I’m not going to let that happen to the United States,” said Trump, chiding Obama for refusing to even use the term “radical Islamic terrorism”.

Heralding the fact that “a civilian in the truest sense got the nomination of a major party,” Trump asserted he had been guided by “common sense” and that he would continue to follow that path.

“We have to be careful. We’re allowing thousands of people to come into our country, thousands and thousands of people being placed all over the country that frankly nobody knows who they are. They don’t have documentation in many cases. In most cases. We don’t know what we’re doing. Let’s see what happens. This could be a very serious problem for the future,” added Trump.

Despite facing a substantial media backlash after he made the comments in December last year, polls taken immediately after the remarks showed that a majority of Americans supported a temporary ban on Muslim immigration.

At the time, the Obama White House said Trump’s stance on the issue disqualified him from becoming president, but after the attacks in Brussels and with the inevitability of more Islamist terror on the horizon, Trump’s position could end up being a rallying point rather than a hindrance in his bid to take the Oval Office.