Trump Hammers Mexico: “Mark My Words… The Wall Just Got Higher… And You’re Paying For It” 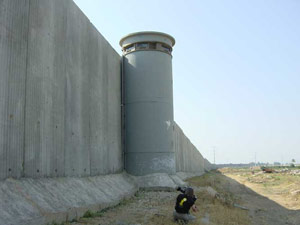 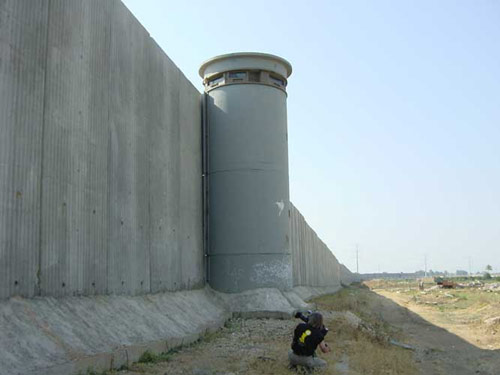 (Pictured: What a Trump border wall might look like. The Israeli West Bank Barrier is 26 feet high and stretches about 400 miles. It is believed that the wall is responsible for reducing suicide bombings in Israel by 83% after it was raised)

Amid recent reports that the Obama administration has unleashed a free-for-all on the southern border, Donald Trump has doubled down on his claim that he will build a wall to separate the United States and Mexico should he be elected President. For the first time since making his announcement, which left pro-immigration supporters accusing him of xenophobia and racism, Trump explained how his wall would be built and that it would cost a staggering $8 billion to complete.

“What we’re doing is we have 2,000 miles, right? 2,000 miles. It’s long but not 13,000 miles like they have in China,” he said, comparing his self-declared great wall with the Great Wall of China, which took hundreds of years to build and reportedly resulted in the death of hundreds of thousands of workers. “Of the 2,000, we don’t need 2,000, we need 1,000 because we have natural barriers … and I’m taking it price per square foot and a price per square, you know, per mile,” he said.

The candidate added that his wall will probably be 35 to 40 feet high — a “real wall” he said. And that it will be one that “actually looks good, you know, as good as a wall is going to look.”

Former Mexican President Felipe Calderón responded to Trump’s suggestion by calling it stupid and saying that there is no way Mexico is paying for such a wall. Calderón added, “we are not going to pay a single cent.”

That, of course, was enough for The Don to hit back in classic Trump style:

“Mexico makes a fortune. Mexico is going to pay. And I heard he said that we will not pay. Guess what? The wall just got higher.”

Despite Calderón’s claims that Mexicans don’t need to come to America because there are plenty of jobs in his own country, the fact is that millions of illegal aliens cross into the United States every year.

Trump argues that those undocumented and unauthorized immigrants are taking American jobs. Moreover, as has been revealed in recent months, individuals with ties to terrorist cells have been detained while attempting to cross the border. In a shocking report that was denied by the Department of Homeland Security Congressman Jason Chaffewtz said that four Islamic Terrorists were detained on the souther border by Border Patrol agents and most recently eight Syrians were caught trying to cross into the United States.

With so much aid and tax incentives going to Mexico, it’s quite plausible that Trump’s promise to make the country pay to secure the U.S. border will become reality should he be elected President. Mexican leaders may be appalled by the strict approach Trump intends to take on illegal immigration, but it’s a well known fact that Mexico often jails those attempting to enter their country without authorization, highlighting the hypocrisy that pervades the Mexican political class.

Interestingly, the Obama administration and supporters of their policies claim that a southern border wall is somehow racist and wholly ineffective, yet Homeland Security recently began building a fence to prevent border crossings… from Canada. And perhaps more notable is that the Obama administration recently outlined a counter-terrorism strategy that included the building of a security wall in Nigeria in an effort to to prevent incursions by Boko Haram forces.

Apparently, a security wall is an effective means of keeping dangerous Canadian cartels out of America and preventing ethnic cleansing in Nigeria, but according to the Department of Homeland Security, will not deter illegal immigration from Mexico.

One thing’s for sure, Donald Trump has a proven track record of getting things done. Trump’s eight billion dollar estimate to secure the border appears to be a heck of a deal, especially considering that the current administration committed nearly a billion dollars for illegal immigrant healthcare and spent some $850 Million on an ineffective and incomplete virtual fence that secures about 53 miles, or 1%, of the border.

Mexico Freaks Out Over National Guard Troops On Border: “No Circumstance Justifies This Measure”