Trend Analyst: “Yes, There Will Be Riots In Major Cities” 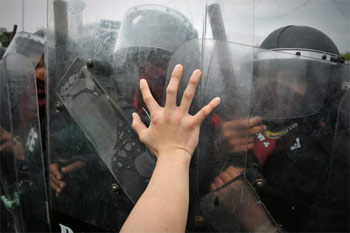 If you’ve watched a documentary about America’s economic situation in recent years there is a strong chance it was produced by Daniel Ameduri of Future Money Trends. He’s covered topics that include everything from the massive college debt bubble and the future of real estate,  to water wars and what it will look like on the day the U.S. dollar finally crashes.

In the following interview Daniel shares a wealth of knowledge and takes a practical approach for how to thrive personally and financially during an economic collapse.

This is a must-watch guide from an extremely well informed source and delves into a wide range of scenarios such as what happens with our currency and our systems of commerce within two weeks of a collapse, as well as the months that follow.

As highlighted in the video, preparing for a worst-case scenario isn’t just about putting food in your pantry, but involves a dynamic strategy depending on your specific circumstances, capabilities and needs.

Yes, there will be riots in major cities… Yes, the U.S. is going to lose its dominance in the world…

In 2008… I think that was just the beginning… That was scratching the surface of what’s to come… the truth was almost revealed.

Within the next five, not later than ten years, I think the truth is going to come out… It’s fraudonomics… Everything is built on fraud and manipulation… and I think once this thing hits and once it comes out, and the U.S. dollar loses its reserve status, or at least there’s a change in the global currency system, I think Americans are in for a huge shock.

If the U.S. does poorly and the economy goes into some type of monetary crisis these things [hard assets and resources] are going to be dramatically risen because people will be looking for value. Just like Warren Buffet buys railroad companies… he’s getting rid of those dollars and buying assets.

The first thing I would get [if a collapse were imminent and days away]… hopefully, number one, I’m at home… of course last minute food… fresh foods… it might be the last time you’re getting apples for a few weeks, depending on how bad it is…

… For sure silver will be used… ammunition… and again, the collapse could be on so many levels. The worst case scenario would be where there’s a complete breakdown… and that wouldn’t probably come from an economic collapse… that would probably be more like somebody striking at our energy… our utility system… and EMP.

I think if we had a lack of power in major cities, and all of a sudden the millions of people in Los Angeles aren’t able to feed their children, or turn the stove on… that’s when you have a major crisis.

Will this last for two or three weeks? That’s very possible.

Will it last for months? Much less likely, unless we’re talking about a global event.

As we’ve discussed in detail over many years, there are a whole host of scenarios that could lead to a complete meltdown in our infrastructure and systems of commerce. The bottom line is that whatever happens, should supply lines be disrupted for even a few days on a national level, there would be widespread panic across this entire country.

Those are the worst case scenarios and they are certainly plausible.

Other possibilities include what we’re already seeing happen in the United States right here and now – a continued degradation of the middle class. That trend is likely to continue unabated and may require a slightly different approach than preparing for a post-Apocalyptic scenario:

I think it’s definitely in their [government] interest for us not to be smart, well thought out thinkers out there. Because then you’re a Libertarian and an anarchist and that’s the last thing you want.

They want you to feel good about the government pointing a gun at somebody else’s head, taking their money and taking their stuff and redistributing it to everybody else.

Is it their goal for us to be impoverished? Probably not too much.

I’m very optimistic, but I have to admit I’m very realistic.

When this shock happens, I definitely see a situation where there could be rioting in the streets… so even though I want people to thrive, I think the first thing we do is we prepare.

I tell people, ‘you prepare for the worst, but then you’ve got to look at the next twenty or thirty years.

For years I identified with being a ‘Doomsday Prepper,’ and I would bet everyone in my life would call me a Doomsday Prepper because of what I’ve done… But, the thing is you don’t want to get stuck on it.

We’re going into the depression. The U.S. is going to change dramatically… how we make our money… how we save for later in life… how we teach our children… It’s all going to change… I don’t want to wait for it to change.

The winds of change are all around us. There are a wide array of potential scenarios that every concerned person should be looking at and preparing for. But that doesn’t mean we have to live our lives in a constant state of fear of the unknown.

It’s got to be more than just preparing for the worst and being stuck in that state… The new economy that’s out there… you’ve got to choose your own destiny.